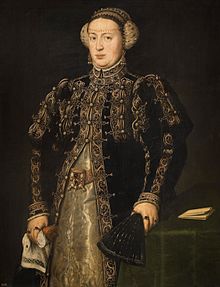 Catherine of Castile, Queen of Portugal 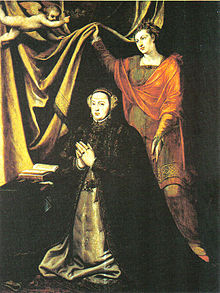 Katharina was a (posthumously born) daughter of Philip the Beautiful and Johanna the Mad . She had five older siblings: the Roman-German Emperors Charles V (born 1500) and Ferdinand I (born 1503), Isabella (born 1501, later wife of Christian II of Denmark ), Maria (born 1505, the future wife of King Ludwig II of Hungary and Bohemia ) and Eleanor of Castile (born 1498, later Queen of Portugal and France ).

After the early death of Katharina's father on September 25, 1506, her mother allegedly went mad and was finally locked up as a prisoner in the castle of Tordesillas because of her condition . While her brother Ferdinand was raised by his grandfather Ferdinand II, the Catholic , and her other siblings lived with Margaret of Austria , the governor of the Netherlands , in Mechelen , she shared her mother's lot and imprisonment. She grew up without any education, locked up as a prisoner in a small room that was behind her mother's room. In 1517, her 17-year-old brother Karl freed her as the Spanish king, accompanied by his sister Eleonore, on the occasion of a visit against her mother's wishes. Then he gave her an education appropriate for a princess. Before that, however, there was a sleazy tragic comedy because the child was kidnapped after visiting her siblings. Her room was only accessible through her mother's. A valet named Bertrand spent several night shifts drilling a hole through the wall between the hallway and the girl's room to free them. At one o'clock at night the servant crawled through the hole and explained to the old valet that Catherine was to be taken to Valladolid. He took the girl to the escort with a litter waiting in front of the house. The child refused to get in at first and only obeyed when the servant strongly referred to the king's command. However, after a few days she was brought back to Tordesillas. The reasons for this are unknown. However, from this point on the child no longer had to go in rags, but received its own servants and proper clothing. She remained imprisoned with her mother until she was 18 in 1525, when her brother, Emperor Charles V, had her taken away for marriage.

In 1525 Katharina married King Johann III. of Portugal and was Queen of Portugal until her husband's death in 1557 (as a wife, not as regent in her own right).

The very energetic Katharina was able to exert significant influence on Portuguese politics. So in 1536 she brought about the introduction of an inquisition tribunal in Portugal. Shortly before his unexpected death (1557), Johann III appointed. his wife became regent for his only three-year-old grandson Sebastian , who had emerged from the marriage of Prince Johann Manuel, who died young, with Johanna . Catherine shared the reign with her brother-in-law, the then Cardinal-Infante and later King Henry of Portugal . As regent, Katharina arranged for a university to be built in Évora in 1559 . She also requested that an inquisition tribunal should be established in Goa for Portuguese rule in the Orient .

As disagreements soon arose with her co-regent, Katharina considered abdicating as early as 1560. It came under greater criticism when the Mazagão base in Africa was lost in 1562 as a result of the delayed deployment of relief troops . As a result, Katharina went to a monastery, but supervised the upbringing of her grandson until he was declared of age in 1568 at the age of 14. Since he was mentally unstable, Katharina tried to influence him even during his reign, without being able to prevent his campaign to Morocco , in which he fell in 1578. Before the news of his death, Katharina had died at the age of 71. She was buried in the Jeronimos Monastery in Lisbon.

Katharina and Johann III. had the following children: