The Kingdom of Portugal ( Portuguese Reino de Portugal ) lay in the west of the Iberian Peninsula and existed from 1139 to 1910. In the course of the Christian reconquest of al-Andalus , it reached the extent of today's Republic of Portugal with the conquest of the Algarve in the 13th century . In the centuries that followed, Portuguese seafarers and traders established one of the most extensive colonial empires of modern times from 1415, with possessions on four continents. Brazil was the largest and most important Portuguese colony . From 1580 to 1640 the Kingdom of Portugal was linked in personal union with the Kingdom of Spain , but retained its independent state organization. In the 19th century, Portugal and its colonies were called the United Kingdom of Portugal, Brazil and the Algarve after a state reform from 1815 to 1825 . After Brazil had achieved its independence peacefully in 1825, the Portuguese colonial empire was in possession of Africa (especially Mozambique , Angola and the Gulf of Guinea ) and the possessions in Asia, which were greatly reduced in the course of the conflicts with England and the Netherlands ( Macao , Timor , Goa ) melted together. The monarchy was eliminated in the revolution of October 5, 1910 , and the titular kingdom of the Algarve was also abolished.

When it was proclaimed in 1139, the Kingdom of Portugal comprised roughly the area between the Minho and Tejo rivers , with about 34,000 km² in the north of today's country. Lisbon was only added in 1147 and replaced the previous capital Coimbra as the seat of government in 1256 .

With the conquest of the Algarve by 1250, the expansion of Portugal on the Iberian Peninsula ended, as Castile and Spain respectively set further Portuguese expansion efforts to the north ( Galicia ), east ( Badajoz ) and south ( Niebla ). The Portuguese-Castilian borders of 1267 and 1297 practically coincide with the mainland borders of today's Portugal. The only exception is the area of Olivença , which Portugal had to cede to Spain as a result of the Orange War in 1801.

From the 15th century, the Kingdom of Portugal expanded overseas and established several colonies. Today only the two autonomous island regions of Madeira and the Azores remain. Including the titular kingdom of the Algarve, Portugal finally ruled an area of ​​around 89,000 km² on the European mainland.

Colonies of Portugal in the 16th century

Colonies of Portugal at its greatest extent around 1800

Already in 1415 the Portuguese conquered by John I of Ceuta in Morocco , the first non-European city. Madeira was rediscovered and conquered by the Portuguese navigator João Gonçalves Zarco in 1419 , the Azores were discovered and conquered by Diogo de Silves in 1427, Cape Verde was circled by António Fernandes in 1445 and discovered for the first time in 1456 by the Venetian Alvise Cadamosto , who was in Portuguese service and taken possession of for Portugal. Disguised as an Arab merchant, Pêro da Covilhã reached the trading town of Sofala in present-day Mozambique in 1488 from Kalikut in India .

Bartolomeu Dias was the first European to circumnavigate the Cape of Good Hope in 1487/1488 and Vasco da Gama reached India by sea in 1498 . In 1500 Pedro Álvares Cabral discovered Brazil. Under King Manuel I (1495 to 1521) Portugal reached the height of its power. Numerous bases have been established on the coast of Africa, South America, Arabia, India and Southeast Asia. The trade network eventually extended to Japan . Portugal agreed several times with Spain to partition the world, for example in the Treaty of Tordesillas of June 7, 1494 and the Treaty of Saragossa of April 22, 1529.

The personal union under the Spanish king weakened Portugal. Colonial territories were lost to the Arabs and the Dutch. Even after the restoration of sovereignty, Portugal's power continued to decline. The British, French and Dutch displaced the Portuguese more and more. Brazil was the only profitable colony to remain under Portuguese ownership until the 19th century. The other possessions in Africa and Asia became more and more a losing business .

When the kingdom was founded, Portugal had around 400,000 inhabitants north of the Tagus. After the expansion on the Iberian Peninsula and the beginning of the expansion overseas at the beginning of the 15th century, Portugal had a population of just under 1 million. The first census in the history of Portugal between 1527 and 1532 showed 287,770 households, which corresponded to about 1 to 1.5 million inhabitants. Two hundred years later, the 1732 census only recorded 1,742,230 residents; In addition, however, there were an estimated 250,000 priests, monks and nuns. Between the years 1800 and 1900 the population increased from 2.9 million inhabitants to over 5 million, when the monarchy was abolished in 1910 it was 5,016,000 (5.4 million with the Azores and Madeira). Between 1872 and 1900, however, 580,000 Portuguese emigrated mainly to Brazil.

The official language in the kingdom was Portuguese , which had replaced Latin as the administrative language from 1296.

Among Burgundians, Avis and Habsburgs

The Second County of Portugal (1093–1139), successor to the First County of Portugal (868–1071), was converted into an independent kingdom on July 26, 1139 by Alfonso I of the House of Burgundy . In 1143 the Kingdom of Castile and León, the previous feudal lords, recognized the independence of Portugal. In 1250 the kingdom acquired the Algarve and Faro in the south, and Lisbon replaced Coimbra as the capital.

In 1580, Heinrich I, the last king of the Avis family, died . Under Philip II of the House of Habsburg , Portugal was united as an officially independent kingdom in personal union with the Kingdom of Spain. As the separation of the two kingdoms eroded, so did the resistance of the Portuguese nobility against Spain. With English support, Portugal regained its full independence under the House of Braganza in the Restoration War from 1640 to 1668 .

Renewed independence under the Braganza

Under the rule of Joseph I and his minister Sebastião José de Carvalho e Mello during enlightened absolutism , the country was reformed, the power of the church was restricted and construction projects in cities were promoted. On November 1, 1755, the capital Lisbon was largely destroyed by an earthquake and rebuilt by Sebastião José de Carvalho e Mello and in 1759 the Jesuit order in Portugal and Brazil was repealed.

After the French Revolution in 1789, Portugal sought the support of the Kingdom of Great Britain to prevent the revolutionary ideas from spreading to Brazil. From 1795 Portugal was Great Britain's last ally on the continent and in 1801 fought the Orange War with France and Spain . Napoleon Bonaparte invaded Portugal again in 1807, forcing the royal family to flee to Brazil, which moved the capital to Rio de Janeiro. From 1808 to 1811, with the help of the English, the Portuguese drove out the French and John VI. returned to Lisbon from exile in 1822.

United Kingdom of Portugal, Brazil and the Algarve

→ Main articles : United Kingdom of Portugal, Brazil and the Algarve 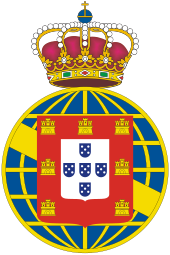 Coat of arms of the United Kingdom of Portugal, Brazil and the Algarve 1815–1825

In order to appease the Brazilian self-confidence towards Portugal, which had grown in the meantime due to the expulsion of the royal family from Lisbon to Rio de Janeiro (1807), the kingdom was formally converted into a United Kingdom of Portugal, Brazil and the Algarve ( Portuguese : Reino Unido de Portugal, Brasil e Algarves ). Brazil was transformed from the Viceroyalty into a formally equal part of the United Kingdom; in fact, nothing changed in terms of Portuguese supremacy. To prevent secession of the increasingly self-confident Brazilians, Crown Prince Pedro remained as regent in Brazil despite the royal couple's return to Portugal (1821) . However, when the Portuguese Cortes restricted absolute kingship with a liberal constitution in 1822, the Brazilian Cortes refused to give their consent and the Crown Prince proclaimed an empire of Brazil that was independent of Portugal (and its constitution) . After the defeat of the liberal revolution in Portugal, Portugal recognized Brazilian independence in 1825 and the United Kingdom ceased to exist. The conservative constitutional charter of 1826 , with a few modifications, remained in force until the end of the kingdom.

With the death of Maria II. In 1853, the rule of the House of Braganza expired and the Princely House of Saxe-Coburg and Gotha gained rule under Ferdinand II .

On February 1, 1908, Charles I and his eldest son Ludwig Philipp were shot by Republicans on the Praça do Comércio in Lisbon. Thereupon the younger son Manuel II became the last king of Portugal. On October 3, 1910, there were several uprisings in major cities in Portugal and on October 5, 1910, the First Republic was proclaimed in Porto .