He went down in Portuguese history as Alfonso the Conqueror (port. Afonso o Conquistador ) and Alfonso the founder (port. Afonso o Fundador ) because he managed to pacify the county of Portucalia in view of the constant attacks of the Moors, areas to conquer south of Coimbra deep into the Alentejo from the Moors and add them to his newly created kingdom of Portugal. His son Sancho I succeeded him on the throne.

Until the takeover of the regency 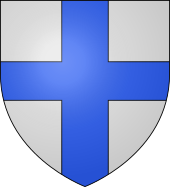 The coat of arms of King Alfonso I.

Alfons was the son of Henry of Burgundy ( Dom Henrique de Borgonha), Count of the County of Portucale or Portucalia and founder of the Portuguese dynasty of the House of Burgundy , and his wife, Theresa of León (Dona Teresa de Leão), the illegitimate daughter of King Alfonso VI. from León and Castile , born. The exact date of his birth has not been determined, it is assumed to be 1108 and 1109, for 1109 the date of July 25 or just the month of August is given. There are other data as well, varying between 1106 and 1111. His birthplace is also unclear, for which either Guimarães or Coimbra are possible. His grandfather, Alfonso VI, had given both his legitimate daughter Urraca and Teresa a husband from the Burgundian ducal house to strengthen ties with Burgundy and France with a view to the reconquest of the Iberian Peninsula ( Reconquista ). Heinrich was the younger brother of the Duke of Burgundy. Urraca and her husband Raimondo gave Alfonso VI. the county of Galicia and Teresa and Heinrich the south adjoining county of Portucalia; the co-regency of the daughters was expressly decreed. Large parts of the county of Portucalia had only been wrested from the Moors in 1080 after they had already been temporarily expelled there in the 9th century. Even now the areas around Coimbra were by no means safe from Moors invasions. Already at an early age Alfons was handed over to the Portuguese Baron Dom Egas Moniz de Ribadouro , who raised him like his own son, trained him and later would become one of his most important personal advisers and his most loyal ally. There are reports that Egas Moniz is even said to have been the biological father. When Heinrich died in 1112, Alfons was only three years old (based on a year of birth 1109), so that initially his mother took over the reign, which she also claimed for herself by virtue of the co-reign ordered by her father. In 1109 Alfonso VI was also. died, and Teresa, together with her lover, according to other reports, pursued her second husband, the Galician Count Fernão Peres de Trava, an union with Galicia in order to establish an independent kingdom, which met with great resistance in the county of Portucalia. Alfonso was drawn to the side of the Cortes of Portucalia by Paio Mendes da Maia , Archbishop of Braga , in 1120 , which is why Dona Teresa banished him together with the Archbishop. When Alfons turned 14, around 1122, the age of majority in the Middle Ages, he knighted himself in the Cathedral of Zamora . With the help of his followers he raised his own army and began to fight against his mother's political plans. After his cousin King Alfonso VII of León and Castile (the son of Urraca) held him back in 1127 from the military capture of Guimarães, his mother's capital, the battle broke out in 1128 in São Mamede, near Guimerães between his and his mother's troops, with whom he won. He banished his mother to a monastery.

In the following years, the young Alfons devoted himself with growing success to the clashes with the Moors. In 1139 he inflicted a great defeat on the Moors at the Battle of Ourique , in the southern part of the Alentejo . Thereupon, either in 1139 or not until 1140, he proclaimed himself king of Portugal. His old follower Paio Mendes, the Archbishop of Braga, presented him with the crown. This led to the break with Alfonso VII of León and Castile, as the county was thus eliminated from his kingdom. In 1143 the papal legate, Cardinal Guido de Vico, toured the Christian part of the Iberian Peninsula and brought the cousins ​​to a table in Zamora in Castile. The meeting is said to have ended with the Treaty of Zamora, in which Alfonso VII is said to have recognized the independence of Portugal. After this conversation, however, only a letter from Alfonso to the Pope is documented, in which he promises annual payments from Portugal to Rome. In the following years he took the city of Santarém (1146/1147), 1147 with the help of a passing army of the Second Crusade Lisbon , then Almada and Palmela and 1160 Alcácer do Sal and then the whole Alentejo almost to the borders of the Algarve. However, he lost this last area again shortly before his death in 1185. In 1162 he founded the military order of St. Bernard of Avis in Coimbra , who was involved in the conquest of Évora in 1162 . He suffered a threatening setback when one of his followers tried to take the Moorish kingdom of Badajoz . Alfonso VII laid claim to all conquered areas south of the Tagus for León and Castile . During a stay in Badajoz, Alfons fell from his horse and was captured in Castilian. He had to recognize the demarcation and was released for a ransom. Only his successors succeeded in finally conquering the Alentejo and the Algarve, so that the Portuguese Reconquista in 1250 under Alfons' great-grandson Afonso III. could be completed.

Support from the Church

Alfons was in many ways dependent on the help of the Church. On the one hand, the Pope's approval for his kingship was still pending, an indispensable prerequisite for full sovereignty in the Middle Ages. On the other hand, he needed support in the rechristianization of the area wrested from the Moors. So he brought the Temple Order and also the Cistercians, who particularly flourished under the leadership of Bernhard von Clairvaux, into the country in the 12th century and provided them with large foundations, such as the Templars with Tomar and large parts of the Alentejo or the Cistercians with Alcobaça , where one the largest and most powerful monasteries of the order came into being. Alfons also tried to protect the remaining Moors. There is a Carta de Segurança (security letter ) from 1170, in which he forbade Christians and Jews from treating the Moors badly. Alfons had to wait for the recognition of his kingship by the Pope, despite the favor shown to the Church, until 1179, when Pope Alexander III. confirmed Portugal's independence with the bull Manifestis probatum .

Alfonso I married Mathilde (D. Mafalda) in 1146 , a born Countess of Maurienne and Savoy. He had the following children with her:

He was also the father of these illegitimate children:

From his relationship with D. Flâmula (or Châmoa) Gomez de Trava (before marrying Dona Mafalda):

From his relationship with Elvira Gualtar:

From his relationship with an unknown lady:

Commons : Alfons I.  - Collection of pictures, videos and audio files