The title of this article is ambiguous. Further meanings are listed under Faro (disambiguation) .

Faro is a port city with approx. 50,000 inhabitants (approx. 70,000 inhabitants in the district) on the southern tip of Portugal in the Algarve region . The city has an international airport and two universities. Faro is the administrative center of the Algarve and an important port protected by a lagoon that is now a nature reserve .

From an older Phoenician settlement, which was also used by the Greeks for a time, the oppidum Ossonoba emerged in Roman times . Due to its port and the proximity to rich fishing grounds, it became an important trading center for wine, oil and fish processing products , especially the garum , which is coveted throughout the ancient world , but also cured fish. Ossonoba was already in the 1st century BC. By Strabo and in the 1st century AD by Pliny in his natural history among the great oppida of the Iberian Peninsula . In the year 418 the Visigoths entered Faro victoriously and named the city "Santa Maria". At the end of the 6th century, Faro briefly belonged to the eastern Roman province of Spania . In the year 713 the city was taken by the Arabs / Moors and renamed “al-Uqshunuba” or “Shantamariyyat al-Gharb”. The place name Hárune , from which the current name is derived, has also been passed down. Bakr Ben Yahia founded a dynasty that ruled from Faro, which he fortified, from 875 to 931 over a principality in the Algarve . In 1217, during the Reconquista , crusaders sacked the city. After they cut Faro off from its hinterland, they conquered under the Portuguese King Afonso III. the city in 1249. Thanks to the printing house of the Jewish community, the first books printed in Portugal appeared in Faro in the 15th century. Faro received city ​​rights only in 1540 ; In 1577 the bishopric was moved from Silves to Faro . Robert Devereux , the Earl of Essex, had the city plundered and pillaged by his 3,000-strong troops during his campaign against the Spanish Cadiz in July 1596. Only the churches of Misericórdia and São Pedro remained intact. The valuable bishop's library ended up as looted art in Oxford . In 1722 and 1755, earthquakes in the Algarve also devastated Faro. As a result of the last earthquake in 1756, the seat of government of the Kingdom of Algarve was moved from Lagos to Faro, which was less destroyed. In 1808, Napoleonic troops took Faro under the command of General Junot ; however, a riot led to their expulsion. Faro has had its own university since 1979. 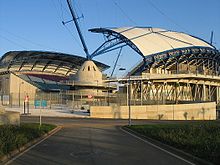 There are also a large number of sports fields and multifunctional halls in the communities. The district administration regularly offers guided hikes on the hiking trails in the district (project name Faro a Andar , German about: Faro erlauf).

Faro is the capital of the Faro district and the seat of a district of the same name (Portuguese: concelho ). The neighboring districts are (starting clockwise in the north): São Brás de Alportel , Olhão , Loulé . In the south lies the Atlantic .

The following municipalities ( Freguesias ) are in Faro County: 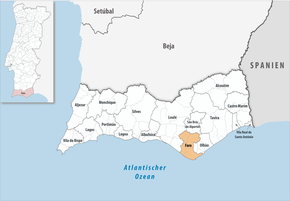 Sister cities of Faro are: 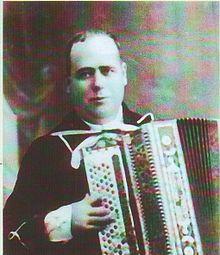 Municípios in the Faro district