The additional division of continental Portugal into regions and sub-regions is only of statistical and developmental significance.

Continental Portugal is divided into 18 districts ( distritos ). These form the highest administrative unit below the government.

The 18 districts of Portugal

Before 1976 the two island groups were also integrated into the district structure. There were three districts in the Azores and one in Madeira:

Up until the administrative reorganization in 2013 there were 4259 municipalities in Portugal.

In addition to the districts, continental Portugal is divided into five regions, which, however, have no administrative institutions. They are not always congruent with the districts and are only used for statistical and general planning purposes.

They were originally created by the Commissions for Regional Development (Comissões de Coordenação e Desenvolvimento Regional, CCDRs) and were later equated with the NUTS II, which was also formed for statistical purposes . Furthermore, unlike the autonomous regions, they have never achieved any significance.

The continental regions are in turn divided into the statistical sub-regions.

The most important division was introduced in 1976 with the separation of continental Portugal from the two autonomous island regions.

The five regions are divided into 23 statistical sub-regions that have no significant administration. Rather, they serve to collect data, plan economic measures and act as NUTS III regions.

The regions and sub-regions of Portugal

The further administrative division into Áreas Urbanas and the further subdivisions into Grandes Áereas Urbanos Metropolitanas (GAM), Comunidades Urbanas (ComUrb) and Comunidades Intermunicipais (ComInter), intended on the basis of laws from 2003, was only carried out in a few cases, especially in the GAM de Lisboa and GAM do Porto. On the basis of a law of August 27, 2008, the corresponding laws and thus the proposed classifications were repealed. The municípios of the subregions (NUTS III) can now form a Comunidade Intermunicipal , abbreviated CIM, as an association for a general purpose ( associação de municípios de fins múltiplos , association of municipalities ). Such special-purpose associations can also establish municípios for the joint pursuit of certain defined purposes with other municípios located outside the sub-region. The associations are separate corporations under public law, to which a council is attached to which the municipal assemblies of the member municípios send representatives. The associations of Grande Lisboa e da Península de Setúbal and Grande Porto e de Entre-Douro e Vouga , which were formed as GAMs due to the previous laws , were transferred separately to an Área Metropolitana under the new law. 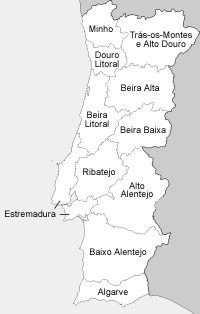 The semi - fascist Estado Novo regime divided continental Portugal into eleven provinces in 1936. They existed until the new territorial regulation with the constitution of Portugal in 1976.

The provinces are still occasionally used in everyday language as regional reference points, since their demarcation from the dictatorship was drawn on the basis of historical, cultural and traditional aspects. The province names were able to establish themselves as simplified regional designations in common usage, detached from actual administrative competencies.

In administrative practice, however, the provinces were unable to assert themselves, mainly due to a lack of competencies or responsibilities that overlap with other authorities and administrative levels. For example, the provincial borders did not respect the borders of the counties, so that counties in parts could belong to several provinces.

The provinces were, from north to south: