This article covers the capital of the Azores, for other meanings see Ponta Delgada (disambiguation) .

Ponta Delgada center and port; in the foreground the seat of government Palácio de Sant'Ana

Ponta Delgada (  [ ˈpõtɐ ˌðɛɫˈɣaðɐ ] , German: Narrow tip ) is the capital of the Azores on the island of São Miguel , but also the administrative district of the same name in the south and west of the island. The three municipalities of Ponta Delgada have a combined population of around 17,800.

Here is the seat of the provincial government and the capital of the University of the Azores, founded in 1976 (Universidade dos Açores). The license plate is A .

Ponta Delgada was built in 1499 by the Portuguese King Manuel I established. It was a fishing settlement in today's Calheta district with the Igreja de São Pedro church , which together with the São José settlement still border the city center to the east and west. A small headland in front of Calheta gave Ponta Delgada (= thin / narrow point) its name. The settlement around a monastery with hospital and safe harbor grew rapidly in the years to come and in 1522 it became a refuge for the island administrator Rui II , who moved from Vila Franca do Campo , which was destroyed after an earthquake . As a result, Ponta Delgada was on April 2, 1546 under the rule of King John III. the city rights awarded.

With the seat of the island administration, the importance grew, in 1522 the construction of the Forte de São Brás to protect against pirate attacks began . The resulting increase in population took place in 1673 as a result of a plague epidemic . With the establishment of orange plantations at the end of the 18th century, the prosperity of the city grew through the influx of foreign merchants and Jewish families from 1818, including the Bensaude family . Numerous stately houses, new streets, a cemetery, as well as gardens and parks in the English style still bear witness to this time. The roofs of several historic buildings from the 18th and 19th centuries are crowned with small square structures that were used by the plantation owners as lookouts. Servants had to keep an eye out for incoming cargo ships so that freshly harvested oranges could be made available for export to mainland Europe and England.

Pope Paul III had already raised Angra do Heroísmo to the seat of the diocese of Angra in 1534 and thus to the most important city of the Azores Islands. The high tax burden and dependence on the bishopric slowed down the further development of Ponta Delgada. In 1821 there was a successful revolt with the participation of the soldiers stationed on São Miguel, which led to the island's independence.

In 1828, the construction of the sewer system under the Vice Admiral of the Portuguese Navy and last captain general of the captaincy of the Azores Henrique da Fonseca de Sousa Prego (1768-1847) began. The first street lighting , still operated with fish oil , was put into service in 1839 and electrified in 1904. In 1901 the first car was introduced on São Miguel. After fierce demands from the orange barons, the port was expanded , but before construction work began on the new port basin in 1861, the orange trees had already fallen victim to an insidious fungus. Before, merchant ships could only anchor in the harbor basin and the orange crates had to be transported out to the schooners in small boats . The new port contributed significantly to the further economic development of Ponta Delgada. It has been expanded several times over the decades: In 1947, the promenade was fortified and the first row of houses, which was regularly flooded during storms, was set back by around 40 meters.

Since 1975 Ponta Delgada has been the seat of the regional government of the Azores. The following year the University of the Azores was founded here.

The city center essentially consists of the central part Sao Sebastião around the church of the same name and the area of ​​the parish São Pedro in the east of the center and São José in the southwest. Further around the city lie the two places Fajã de Baixo , the "low place" and Fajã de Cima , the "higher place".

Fajã de Baixo is known for the pineapple grown there , Fajã de Cima for its exuberant festivities and the cream cheese made from a mixture of goat and cow milk . Both places are commuter locations and many of the residents work in the center of the city. Every year in May, the "Dia do Santo Cristo", the feast of the Holy Christ , is celebrated with lavishly decorated streets lined with flowers.

The port of Ponta Delgada has always played a central role due to its island location and has been repeatedly expanded, enlarged and fortified since the city was founded. The two port basins with the entrance on the east side have a size of approximately 550 m × 1200 m, the protective pier has a length of 1500 m. The minimum fairway depth is 9.4 m, the anchorage depth 14.0 m and the depth of the cargo pier 12.5 m, the average tidal range is 2.0 m. The freight traffic of containers, vehicles and general cargo between the islands for the Azores is carried out by the company Açores Expresso , which also ensures supplies from the mainland via the port of Leixões with four container ships twice a week . With the most recent expansion, which was completed in 2008 and largely realized with EU funding, the sleeping area has been quadrupled and now offers space for 640 yachts . At the same time, with the Portas do Mar program, a modern cruise terminal was created that offers space for passenger ships and large yachts up to 360 m in length.

The company Atlanicoline started in 2005 with ferry traffic for vehicles and passengers between the islands to the ports of Porto Horta on Faial , Porto São Roque do Pico , Praia on Graciosa , Porto Velas on São Jorge , Villa do Porto on Santa Maria and Ponta Delgada with two ships called lha Azuk and Express Santorini . In 2009 the high-speed ferry was added as "Vikings", currently the ferries are called: Santorin , Arie and Hellenic Wind . Ponta Delgada's marina has held the Blue Flag since 1999. Whale watching tours , which are offered by several small companies and run regularly in the mornings and afternoons, are an attraction of the harbor life . In the harbor there is a sea rescue tug and a small fishing fleet. In the Azores, catching deep-sea fish is very diverse and very different types of fishing gear are used. The most common species caught are tuna (39%), gray bass (30%), bream (16%) and horse mackerel (12%). Most of the fish is caught by vessels less than 12 meters in length.

Site plan of Ponta Delgada in the 1880s 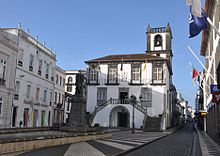 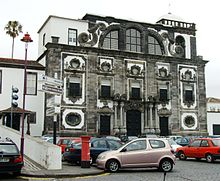 Sister cities of Ponta Delgada are:

Municípios of the Azores

Freguesias in the concelho Ponta Delgada