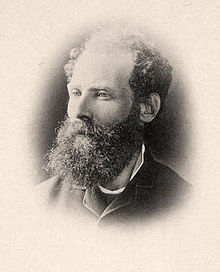 Antero Tarquínio de Quental (born April 18, 1842 in Ponta Delgada , Azores ; † September 11, 1891 ibid) was a Portuguese poet , critic and social reformer . He is generally considered to be the most important Portuguese poet of the 19th century. He was also one of the leading intellectuals in Portugal in the second half of the 19th century, who had an intellectual revolution in mind.

Antero de Quental was born in Ponta Delgada in the Azores in 1842 as the son of the landowner Fernando de Quental and Dona Ana Guilherma de Maia Quental. The upper-class aristocratic Quental family was one of the leading families in the Azores. Numerous personalities of intellectual and cultural life in Portugal came from it since the 17th century. One of Antero de Quental's ancestors was the clergyman Bartolomeu de Quental (1626–1698), professor at the University of Évora from 1647 , and court preacher to King João IV from 1654 . The poet António Feliciano de Castilho (1800–1875) was a neighbor of the family. Antero de Quental was a frequent guest there and for the first time was taught his affinity for popular education and social issues.

Antero de Quental attended the Colégio São Bento in Coimbra from 1856 to 1858 . In the same city he enrolled as a law student , where he began studying in 1858 and graduated in 1864. His uncle, Filipe de Quental, was a professor of medicine in Coimbra at the time. While still a student he published a student magazine, made friends with famous personalities such as Eça de Queiroz or Teófilo Braga and became the head of a student secret society "Raio", which brought about the overthrow of the reactionary rector of the University of Coimbra and with a march from two thousand students to Porto for a more liberal university policy even forced the army to deploy. In addition, Quental was the leader of the so-called School of Coimbra and the question of Coimbra , a compass, the longed-for, the cultural, artistic and literary renewal mainly from Portugal and from the poets of the Portuguese tradition from the Renaissance through the Baroque to to the romance like Luís de Camões , António Vieira , Almeida Garrett , Alexandre Herculano and António Feliciano de Castilho wanted to settle. This is how two literary-cultural parties emerged in Coimbra, which fought each other fiercely and, thanks to their debates, gave Portuguese culture new impetus.

After completing his studies, he went to Lisbon, where he worked as a printer, and in 1867 briefly to Paris , where he did the hardest work as a simple worker, became involved in the workers' council and met the historian Jules Michelet . During a second stay in Paris, he also met the writer Alphonse Daudet .

In 1868 he returned to Portugal and initially lived in Lisbon. Not least because of the attraction of his personality to others, the Cenáculo (named after the Cenaculum , the place of the last meeting of the apostles with Jesus), a circle of intellectuals, who came to socialize and to debate about the path their country should take, arose. got together. The Cenáculo included u. a. José Maria Eça de Queirós , Abílio de Guerra Junqueiro and José Duarte Ramalho Ortigão . But Quental did not like the way some members stylized themselves as bohemians . Instead, Quental was interested in social and political changes. He participated - e.g. B. through his brochure O que é a Internacional? ( What is the International ? ) - in preparation for the founding of the Partido Socialista Português in 1875 , the first Marxist party in Portugal.

In 1877 he lost three important people: First, his beloved mother died. Then the poet Alexandre Herculano , with whom he had reconciled himself after the “Question of Coimbra” and who became his master and good friend, died by suicide. The death of his childhood friend Germano Meireles brought his two underage daughters to him, whom the unmarried man lovingly took in and raised until shortly before his death, where he placed them in a foster family.

In view of his poor health, Quental spent the last decade of his life, from September 1881 on, on medical advice in the seaside resort of Vila do Conde , only interrupted by a few visits to Lisbon and two trips to his home island in the Azores in 1887 and immediately before his death. In Vila do Conde he lived secluded behind high walls in a very modest house with a small garden. Quental prepared his Sonetos Completos for printing and published the magazine Revista Ocidental , which he founded . Soon after his arrival, he said the time in Vila do Conde was the happiest of his life. With his many friends and acquaintances - apart from those already mentioned u. a. the poets António Feijó , Camilo Castelo Branco , João de Deus , Joaquim Pedro de Oliveira Martins and the archaeologist Francisco Martins Sarmento - Antero de Quental maintained an intensive correspondence.

Quental's answer to the British ultimatum of 1890

Britain gave Portugal an ultimatum in 1890 to give up certain colonies. This gave rise to national and patriotic moods and movements. Due to the failure of politics, Quental was appointed by many intellectuals as the "spiritual father of a national-patriotic movement for mobilization" or as president of the Liga Patriótica do Norte . This made him known all over Portugal and around 800 students gathered in front of his apartment and solemnly chanted “Viva, Viva Quental” and forced him to appear on the balcony with a wave.

Quental was one of the first Portuguese poets whose work was translated into German. This was done by Wilhelm Storck , with whom he was in correspondence. Because of his illness, he was originally supposed to be treated in Germany, but shied away from the long journey. One of his friends was the well-known German Lusitanist Carolina Michaëlis de Vasconcelos . He also read countless German authors whom he particularly valued as philosophers: such as Heinrich Heine , Friedrich Schiller , Gottfried Wilhelm Leibniz , Alexander von Humboldt . Quental was a big fan of Johann Wolfgang von Goethe .

On September 11, 1891, Quental ended his life in Ponta Delgada by suicide . He shot himself with two pistol shots in the Campo de São Francisco, the main square of Ponta Delgada, in public, but did not die immediately, but only two hours later in the hospital. The next day he was buried next to his parents and brother in a cemetery in Ponta Delgada.

Antero de Quental, a giant of stature, blue-eyed and blond-haired, was introverted, dreamy, cosmopolitan, and shy of the public. He often sat alone on the beach and gazed out to sea for hours. He is described as highly sensitive and gifted. In his social struggle he felt like a paniberist who advocated the unification of Spain with Portugal, albeit at the expense of Spain, and who was close to Karl Marx and socialism. The poor could come to him at any time and he helped where he could. He was also one of Portugal's first classic eccentrics. He was also melancholy and, according to today's terminology, suffered from depression , which cost him his life.

Quental may have the largest library on Buddhism in Portugal; Dozens of books on Buddhism and India were in his library. Three poems that he published in the Sonetos Completos dealt with Buddhism, one of which is entitled Nirvana . Although Quental was not a practicing Buddhist, the teaching was close to him and much of it was incorporated into his work. In addition, he was probably one of the first prominent Portuguese to study Buddhism intensively in Portugal and thus anticipated future developments in his country. A good friend was Portugal's only orientalist and Indologist of the time, Guilherme de Vasconcelos Abreu (1842–1917), who helped him expand his Buddhist library.

His work is particularly important as a poet. He was on the search for infinity, also in his poetry, which was shaped by social questions such as the worker question as well as by the question of internationalism and transcendence . He is often referred to as a poet-philosopher as many of his poems are highly philosophical.

Writings on literature, religion and philosophy