Camões is a redirect to this article. Further meanings are listed under Camões (disambiguation) .

Luís Vaz de Camões [ luˈiʃ vaʃ dɨ kaˈmõi̯ʃ ] (also Luiz Vaz de Camões ; * 1524 or 1525 probably in Coimbra or Lisbon ; †  June 10, 1579 or 1580 in Lisbon) is one of the most important poets of Portugal and the Portuguese language. His epic Die Lusiaden is an authoritative work of the Renaissance . Camões is also one of the most outstanding lyric poets in Europe. As a playwright in Renaissance and 16th century Portugal, he stands alongside Gil Vicente , António Ribeiro and António Ferreira .

Camões is revered as the national poet of Portugal. The day of his death, June 10th, is the Portuguese national holiday .

Biographical information about Camões' life is sparse and for the most part not documented and therefore possibly part of the legend . The Portuguese historian and writer Diogo de Couto , who was friends with Camões, was the first to leave behind a kind of biography, which, however, often presents facts that cannot be verified. Documentary evidence can hardly be found. Research in the 19th and early 20th centuries therefore tried to construct a biography from the literary work and the few surviving sources:

Luís Vaz de Camões was the only child of Simão Vaz de Camões and his wife Ana de Sá de Macedo. In his early years the father left his family in order to get rich in India , but died after a few years in Goa . The mother later remarried. Camões came from the lower nobility. Coimbra or Lisbon is often mentioned as the place of birth. There is no birth certificate.

The young Camões was raised by Dominicans and Jesuits . Later he probably studied at the University of Coimbra , where one of his uncle, Bento de Camões, prior of the Santa Cruz Monastery , was chancellor, and received a classical education. He was King Dom João III at the court . worked as educator of courtiers and fell in love with Catarina de Ataíde, one of the queen's ladies-in-waiting. Because of this love story, however, he had to leave the royal court in 1546.

From 1549 he served as a soldier in Ceuta and lost his right eye in a battle against the Moors . On his return to Lisbon, he injured the royal officer Gonçalo Borges during the feast of the Ascension and was subsequently imprisoned. Following several advocates, he was sentenced to a heavy fine and three years of military service abroad.

In 1553 he traveled to Goa on a ship and was imprisoned for debts immediately upon arrival. Released, he took part in a battle on the Malabar Coast . By the end of his term, he had made it to the position of command officer in Macau . Camões was also charged with embezzlement, and he went to the Goa court to justify himself. At this stage in his life, Camões began working on his main work, Os Lusíadas . On the way back from Goa to Macao he was shipwrecked on the Mekong , but he was able to save the manuscript of his epic. 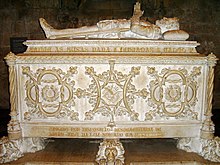 In 1570 Camões was back in Lisbon and published the Lusiads two years later. The Portuguese King Sebastian I granted him a pension, but explicitly and exclusively for the military services rendered.

At the age of 55 or 56, Camões died of a plague epidemic and was buried in a mass grave. His tomb is now in the Mosteiro dos Jerónimos (Jeronimos Monastery) in the Lisbon suburb of Belém . However, the cenotaph is empty and is only to be understood as a symbolic gesture in relation to the poetic and national greatness of Camões.

As a poet, Camões wrote eclogues , odes , kanzonen , redondiljen and sonnets, among other things .

His main work is the epic Os Lusíadas (1572), which was first fully translated into German in 1806. In the style of classic epics, with echoes of the Odyssey and the Aeneid and with recourse to Greek and Roman mythology, it depicts the discovery of the sea route to India by Vasco da Gama , his journey along the African east coast around the Cape of Good Hope and to Calicut . Camões combines this storyline with a portrayal of Portuguese history.

In addition to the epic and poems, three comedies by the author have survived, but they did not acquire the meaning of his lyrical work: Anfitriões (1587), El-Rei Seleuco (1645), Filodemo (1587), the latter probably already performed in Goa in 1555.

Camões reception in Germany and abroad 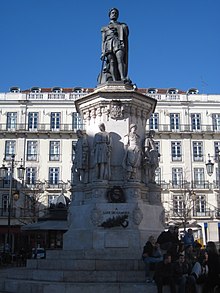 Monument on the Praça Luís de Camoes in Lisbon

A number of important foreign authors have also dealt with the work of Camões, such as Voltaire , Alexander Pope , Jorge Luis Borges and the ethnologist, traveler and writer Sir Richard Francis Burton , who also translated Camões into English.

The life of Camões was also covered in the opera Indra (1852). The music came from Friedrich von Flotow , the libretto from Gustav Gans zu Putlitz . The opera was reworked and worked out several times and performed under different names. He got the idea from the play by Frenchman Jules-Henri Vernoy de Saint-Georges , who wrote the one-act play L'esclave de Camoës . Both opera and theater have hardly received any reception.

Camões also appears as a character in the opera Dom Sébastien, roi de Portugal (1843) by Gaetano Donizetti and Eugène Scribe , here primarily as the king's companion in war.

The highest Portuguese literary prize, the Prémio Camões , bears his name in honor of the poet and has been awarded annually since 1989 by the Portuguese Fundação Biblioteca Nacional and the Brazilian Department Nacional do Livro . The Portuguese cultural institute Instituto Camões also bears his name.

In Macau, the Camões Gardens are a reminder of the author's presence in the city. In Lisbon, the Praça Luís de Camões was named after the national poet, as was the Largo Luís de Camões in Figueira da Foz . 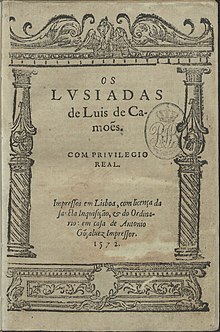