Conrad Ferdinand Meyer (* 11. October 1825 in Zurich ; † 28. November 1898 in Kilchberg near Zurich) was a Swiss poet of realism , of (especially historical) short stories , novels and poetry created. Along with Gottfried Keller and Jeremias Gotthelf, he is one of the most important German-speaking Swiss poets of the 19th century. 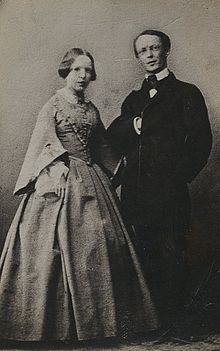 Conrad Ferdinand Meyer with his sister Betsy, around 1855

Conrad Ferdinand Meyer was born into a patrician family in Zurich as the son of government councilor Ferdinand Meyer (1799–1840). At the age of 15 he lost his father. He had an extremely difficult relationship with his mentally stressed mother Elisabeth / Betsy Meyer, née Ulrich (born June 10, 1802 in Zurich), who committed suicide on September 27, 1856 at Préfargier (Gem. Marin-Epagnier ). Throughout his life he was friends with Johann Conrad Nüscheler .

For a few years of his youth he lived in Lausanne , where he learned French so well that he translated French literature and considered becoming a French writer or pursuing an academic career as a Romance philologist . During this time he became a member of the Swiss Zofinger Association . Before he was twenty he was admitted to a mental hospital for the first time for severe depression .

After his mother's death, an inheritance gave him secure circumstances. He went on a trip to Italy with his sister, who was very close to him, which impressed him very much. His first volume of poetry was published anonymously in 1864. In 1869 he moved with his sister to Küsnacht on Lake Zurich . The war between Germany and France in 1870/71 plunged Meyer, who lived in both cultures, into a deep conflict. After the German victory, he decided on German literature.

He first had literary success in 1872 when, at the age of 46, he published the cycle of poems Hutten's Last Days , which, like all subsequent book versions, was published by the Leipzig publisher Hermann Haessel (1819–1901). In 1876 the novel Jürg Jenatsch appeared (in the first editions in 1876 and 1878 still under the title Georg Jenatsch ), in 1877 the humorous short novella Der Schuß von der Kanzel . The inclusion of Der Heilige by the renowned publisher Julius Rodenberg as a preprint in the Deutsche Rundschau (journal version 1879/80; book version 1880) consolidated Meyer's reputation as an outstanding narrator. In 1882 the collection of poems appeared , which also shows him as an important poet. It was expanded or improved with every edition until his psychological breakdown in 1892.

In the following period historical short stories and novels appeared almost every year; Of particular importance are The Monk's Wedding (1884), The Judge (1885) and The Temptation of Pescara (1887).

His private life also changed in the 1870s: in 1875 he married Luise Ziegler (1837–1915), daughter of Zurich City President Paul Carl Eduard Ziegler . That decisively strengthened his social reputation. In 1877 he moved to Kilchberg near Zurich, where he lived until the end of his life. 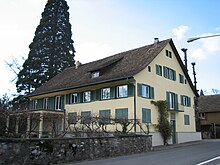 In 1879 the daughter Camilla was born, who like her grandmother committed suicide in 1936. Meyer's wife was jealous of Meyer's sister Betsy, with whom he had lived for many years and who worked for him as a secretary and literary confidante. The relationship between CF Meyer and his sister was close and loving. Betsy Meyer withdrew largely from her brother's life for many years at the end of 1880 and worked charitable for other mentally ill people; Visits to his brother were rather the exception for Betsy Meyer in the 1880s, presumably so as not to disturb his marriage.

In 1888 Meyer again suffered severe ailments. His last work, Angela Borgia , he was only able to finish with great difficulty. In 1892 he was again admitted to a psychiatric hospital. He fell more and more into a state of twilight and was discharged in 1893 without any significant improvement. He spent his last years, cared for by his wife, in his house in Kilchberg, where he died on November 28, 1898 at the age of 73. He found his final resting place on December 1st in the Kilchberg cemetery. Louis Wethli created a funerary monument in the shape of an obelisk. His wife and daughter found their final resting place next to him. The memorial for his sister Betsy Meyer is in the garden of the CF Meyer house. 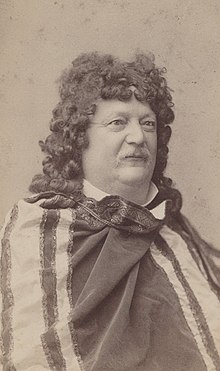 Conrad Ferdinand Meyer in costume, around 1883

Special features of Meyer's narrative works are their stylistic brevity and compactness, which even contemporaries noticed, sometimes in an admiring way, but sometimes also from a critical point of view: Meyer's publisher Hermann Haessel, for example, tried to B. often to move him to a more epic style (especially at the wedding of the monk ), but in vain - Meyer stuck to his dense narrative style throughout his life. From today's perspective, one can understand this lack of superfluous paintwork as a quality of these texts.

Meyer's works are also often characterized by a subtle sense of humor. In a kind of framework story, prominent people sometimes appear as secondary characters, such as the Swedish king Gustav Adolf (in Gustav Adolfs Page ), Louis XIV (in The Sorrows of a Boy ) or Dante Alighieri (in The Monk's Wedding ). The poet assumes that the reader is informed about the meaning of these "secondary characters". But sometimes there are surprises in this regard. If there is a framework plot (e.g. in The Saint and The Wedding of the Monk ), the framework and internal plot are always artfully interwoven.

Editions of works (in selection)

Meyer as a literary figure