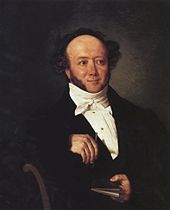 Jeremias Gotthelf (born October 4, 1797 in Murten , † October 22, 1854 in Lützelflüh ) was the pseudonym of the Swiss writer and pastor Albert Bitzius .

Albert Bitzius was born on October 4, 1797 in Murten as the son of the reformed pastor Sigmund Bitzius (1757-1824) and his third wife Elisabeth Bitzius-Kohler (1767-1836). With his first wife Maria Magdalena Studer, Sigmund Bitzius had a daughter Maria Magdalena Bitzius (1788–1860). In 1805 the father was transferred to the farming village of Utzenstorf . Here Albert got to know the rural world of the Emmental . Albert's father taught himself. From 1812 Albert attended the literary school in Bern and from 1814 switched to the university for theologians as an external student (foreign student, student) . From this time he wrote:

Here I spent three years in so-called philosophy very diligently, practicing ancient languages, mathematics, philosophy, where Joh. Rud. Wyss looked after me in a particularly friendly and fatherly manner. He once said to my mother happily: “Please tell your son that he should learn to write more beautifully, he writes like a pig. If he has something printed, especially in Germany, he has Schinder's annoyance. ”“ Yes, I want, ”my mother answered,“ he'll probably be lah blybe. ”“ You never know, ”said Wyss. (from Complete Works. Rentsch, Erlenbach-Zürich, 1921–1977, Supplementary Volume 18, pp. 13f.)

In 1817 he began regular theology studies in Bern, which he completed in 1820. In 1819 he was a founding member of the Swiss Zofinger Association . After a vicarage with his father in Utzenstorf, he continued his studies in Göttingen for a year in 1821 . On a subsequent study trip, he visited the island of Rügen , Berlin , Weimar , Leipzig , Dresden and Munich . In the spring of 1822 he returned to Utzenstorf. In 1824 his father died and Albert Bitzius became vicar in Herzogenbuchsee . In 1829 he came to Bern as a parish assistant at the Heiliggeistkirche . In 1831 he moved to the parish of Lützelflüh in the Emmental as vicar , where he was elected pastor a year later.

He soon campaigned for compulsory schooling to be enforced . Pedagogically he was in the tradition of Johann Heinrich Pestalozzi , whom he met personally on April 28, 1826 at the annual meeting of the Helvetic Society in Langenthal . He was more critical of his fellow countryman Philipp Emanuel von Fellenberg from Bern . He fought against the exploitation of contract children from poor families as cheap labor and demanded measures against alcoholism .

Henriette Bitzius-Zeender , the wife of Jeremias Gotthelf, portrayed by Friedrich Walthard around 1850

In 1833 he married Henriette Zeender (1805–1872), daughter of the Bernese theology professor Jakob Emanuel Zeender (1772–1807), in the church in Wynigen . Together they had three children: Marie Henriette (1834–1890), Albert (1835–1882) and Cecile (1837–1914). The son later also became a pastor and continued his father's efforts in many areas for social reform in the canton of Bern. The older daughter married a pastor and, like her father, wrote under a pseudonym after his death.

In 1835, Bitzius was elected school commissioner for the 18 schools in the communities of Lützelflüh, Rüegsau, Hasle and Oberburg. After ten years he was dismissed from this office because of political differences with the government.

Also in 1835 he played a key role in founding the Trachselwald Poor Education Center in the Trachselwald Castle Estate . He campaigned for it until his death. In the publication Die Armennoth (first published in 1840) he processed the experiences made.

He was denied political activity because of his pastoral office. In his writings, he criticized the ruling families in Bern , who in his opinion cared too little about the socially disadvantaged.

The journalist and writer 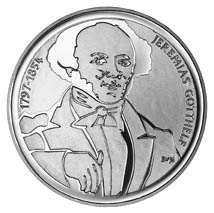 Jeremias Gotthelf on the 20-franc commemorative coin from 1997 on the occasion of his 200th birthday, designed by Samuel Buri

From 1828 and above all from 1831 Gotthelf worked as a journalist. Until his death he wrote around 150 mostly unsigned newspaper articles in which he dealt with political, economic and social issues. Most of his articles appeared in the Berner Volksfreund . The targets of his criticism were prominent Bernese radicals such as Karl Neuhaus and Jakob Stämpfli . He also had violent arguments with the lawyer Wilhelm Snell , a professor at the University of Bern who taught radical liberalism and rejected the reforms demanded by Gotthelf as too interventionist . Gotthelf was politically and personally close to the liberal-conservative Eduard Blösch .

Gotthelf started writing in 1836. His first novel was Der Bauern-Spiegel . The name of the main character from this work also became the author's name of Bitzius: Jeremias Gotthelf. In the following years he worked tirelessly as a writer and published novels, short stories, contemporary and historical, as well as essays.

Julius Springer , whose publishing house in Berlin began to publish all of his writings from 1846, played a major role in the distribution of Jeremias Gotthelf's literary work in the northern German states . To increase awareness, Springer had repeatedly advised his author to use idioms and terms in local Swiss dialect sparingly. The first book in the High German version is Uli der Knecht (1846). Springer offered Gotthelf's books in various designs and in all price ranges.

In 1851 a sore throat and heart with dropsy broke out. In 1853, a stay at a health resort in Gurnigelbad failed to relieve his coughing and sleep addiction. Jeremias Gotthelf died on October 22, 1854 of a pulmonary embolism , which occurred as a result of pneumonia.

Gotthelf's novels depict rural life in the 19th century in a sometimes terrifying realism . He could describe people and landscapes with a few strong, powerful words. Gotthelf understood like no other writer of his time how to process the Christian and humanistic demands in his work. After the Bern Sanitary Commission asked him in January 1843 to write a popular pamphlet against quacking , the two-volume novel How Anne Bäbi Jowäger Households and How He's Doing a Doctor came out of it .

In his framework novella The Black Spider (1842) he processed old legends into a parable story about Christian-humanistic ideas of good and bad. At first hardly noticed, many literary critics consider this story to be one of the masterpieces of the German Biedermeier period . Thomas Mann wrote about it in The Origin of Doctor Faustus that Gotthelf “often touched the Homeric” and that he admired his Black Spider “like no other piece of world literature”. As a writer, as Walter Muschg described him in 1954, "this outsider [...] is unquestionably not only the greatest, but the only first-rate narrator in German literature, the only one who can be compared with Dickens, Balzac or Dostoyevsky." Muschg admits with concern: “Nevertheless, he is unknown to many outstanding connoisseurs. His name invariably makes them smile, and it seems impossible that he will ever go down in world literature. Not only because only a Swiss can measure the abundance of his barbaric language. "

Gotthelf saw his ideal of a society characterized by diligence, down-to-earthness, honesty, modesty, thrift, love of home and fear of God threatened by individualism , radicalism and advancing industrialization. As a symbol of this supposed endangerment of house and yard, Jews also function in his work. B. as speculators and fraudsters; Likewise, the anti-Judaistic legends of "the murder of God" and "Jewish obduracy" can be found in his stories.

Between 1849 and 1855, Gottfried Keller reviewed a number of Gotthelf's books (→ s: Keller about Jeremias Gotthelf ) . In it he criticized the licentiousness of his anti- radical propaganda, but at the same time praised him as a great epic poet . In a detailed appraisal after Gotthelf's death, he characterizes his compatriot:

“He is sometimes called a coarse Dutch painter, sometimes a village storyteller, sometimes a very good copyist of nature, sometimes this, sometimes that, always in a favorable limited sense; but the truth is that he's a great epic genius. Dickens and others may well be more brilliant in their talent for form, more striking, more skilful in writing, more conscious and more purposeful in all of Thun: none of them achieve the deep and great simplicity of Gotthelf […]. In every story from Gotthelf, density and intimacy have the makings of a “ Hermann and Dorothea ”; but in no one does he even make the slightest attempt to give his poem the beauty and perfection that the artistic, conscientious and economic Goethe knew how to give his one, so gracefully and limited built epic. "

Various writers deal with Gotthelf's life and work in their work. The Basel poet pastor Jonas Breitenstein was inspired , for example, by Gotthelf's story Hans Jakob and Heiri, the two silk weavers from 1851, to write his stories and pictures from the Basel area , published in 1860 . The title unmistakably refers to Gotthelf, namely to his five-volume anthology Stories and Pictures from Popular Life in Switzerland , published between 1850 and 1855 . Breitenstein was also known as the “Baselbieter Gotthelf”, as the Lucerne country pastor Xaver Herzog (1810–1883), who was also active as a writer, was called “Lucerne Gotthelf”. For the Austrian writer and social reformer Franz Michael Felder , Gotthelf was the great role model for his socially critical novels and stories.

Gotthelf's literary reception continued in the 20th century. The Swiss writer Hansjörg Schneider first wrote the libretto for the opera of the same name by Rudolf Kelterborn (premiered in 1984) based on Gotthelf's novella The Black Spider, and then in 1988 a short story in which he freely implemented the original. The novel 2666 by the Chilean writer Roberto Bolaño revolves around the fictional writer Benno von Archimboldi, who is said to have written the novel Bitzius about Gotthelf's life. The Baselbieter writer EY Meyer , who lives in Bern , published Der Ritt in 2004 . A Gotthelf novel and also dealt with Gotthelf in other works.

Some of Gotthelf's works have been filmed. In Switzerland, Uli der Knecht (1954) and the sequel Uli der Pächter (1955) were very successful. The director was the Emmental director Franz Schnyder and the later very successful actors Hannes Schmidhauser and Liselotte Pulver played the leading roles. Radio play adaptations of Gotthelf works are also very popular.

Gotthelf's estate is in the Bern Burger Library . In his honor , streets were named after him in many localities, including Zurich , Bern and Basel , with the one in Basel giving the name to an entire quarter, the Gotthelf quarter .

In August 2012 the Gotthelf Center Emmental Lützelflüh was opened in the former rectory and the associated buildings. 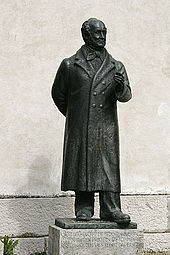 who doesn't have a hardship

what should shine in the fatherland

Whoever wants to reap love must sow love

is a fool or has to be one

will always find something to complain about