A three-dimensional Swiss cross has symbolized Switzerland's liberal future prospects since April 2006 as an FDP appearance. The symbol was adopted by the “FDP. The Liberals”.

Its aim was to promote freedom and personal responsibility in social and economic policy .

The Liberal Democratic Party had around 120,000 members in 2008 and was organized in local and district parties; there were cantonal parties in all cantons except Appenzell Innerrhoden .

On the basis of the same basic liberal conviction, the joint parliamentary group of the FDP Switzerland and the Liberal Party of Switzerland was constituted in 2003 , two years later both parties founded their party alliance, the Union of Liberals and Liberals , which had a total of 140,000 members.

After the merger of the national women's (2007) and youth organizations (2008) of both parties, the FDP and LPS founded the new joint liberal federal party "FDP.Die Liberals" on January 1, 2009. The liberal parties of the cantons of Geneva , Vaud and Basel-Stadt became members of the “FDP. The Liberals” without a cantonal merger with their free-thinking sister parties .

The party (or its predecessor group) has been represented in the Federal Council without interruption since 1848.

The FDP is considered to be the leading party in Switzerland because it shaped Switzerland significantly in the second half of the 19th century thanks to its abundance of power. Between 1848 and 1891 all 7 federal councilors belonged to the free-thinking movement. Since then she has ruled in coalition or concordance governments . To date, the party has a total of 67 Federal Councilors, three times more than any other party in Switzerland. The FDP gave Switzerland its first female Federal Councilor, Elisabeth Kopp (1984–1989) and Annemarie Huber-Hotz, its first female Federal Chancellor (2000–2007).

The most important political concern of the FDP was the defense of negative freedoms . As a liberal party, it was convinced that a free social and economic order was superior to an order with a strong, redistributive and regulating state in terms of public welfare and prosperity .

The FDP's policy in the 2004–2007 legislative period was based on its thesis paper The 7 free-thinking liberal priorities 2004–2007 . These priorities included the elimination of economic regulations to secure jobs, the strengthening of the education and research sector, the defense of individual freedom, a balanced - that is, a monetarism- oriented - financial and tax policy, a safeguarding of pensions and the health system Stabilization of the costs and fight against social abuse, the implementation of a parallel government and administrative reform as well as a strong security policy and army in the sense of the Army Reform XXI .

The programmatic positions of the FDP can be seen from the party program and the party's position papers.

Core demands of the FDP for a successful Switzerland:

FDP President Fulvio Pelli speaks at a party conference in 2007 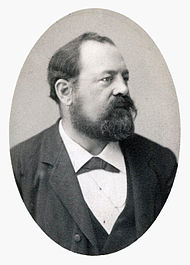 Since the FDP was founded, a total of 28 personalities have headed the party. The longest term of office was held by the Uri National Councilor Franz Steinegger , who presided over the party for 12 years (1989–2001). Five presidents were elected to the Federal Council during or after their term of office .

The Federal Council in 1901 on a newspaper cartoon

The FDP emerged from the liberal movement . The liberal movement arose in the aristocratic, urban and oligarchic governed old Confederation during the Enlightenment in the 18th century in circles of the disadvantaged rural nobility and the educated middle class. After the end of the Helvetic and Napoleonic Wars in 1814, there was also a conservative-aristocratic restoration in Switzerland . In particular, the equality of rural and urban elites was revoked in many places. For this reason, the liberal movement, which saw itself as the defender of the gains of the French Revolution , was particularly well represented among the young rural elites. The new liberal movement organized itself into singing and shooting clubs as well as reading societies. The movement split up into liberals (free radicals) and radicals. The latter also demanded the liberal rights of freedom, but wanted to replace the census suffrage with a general, free male suffrage and achieve a radical replacement of the feudal basic burdens. The radicals were also ready to enforce their ideas by force.

Regeneration time and establishment of the state

In various cantons in Switzerland, after the July Revolution of 1830, there were radical upheavals, the so-called " regeneration ". At the end of 1830 and beginning of 1831 the liberal leaders, mostly members of the rural upper class, gathered their supporters in large popular assemblies and fought for liberal constitutions in various cantons. 1830 is the founding year of the Solothurn freedom under the leadership of the later Federal Councilor Josef Munzinger . In 1831 the "Patriotic Association" was founded, which called itself the "Protection Association for Freedom". It can be seen as a forerunner of the FDP. In 1844/45 the radicals organized so-called free marches against the conservative canton of Lucerne . The Sonderbund War of 1847 also brought victory for the Liberals at the national level. The Swiss Federal Constitution of 1848 was clearly liberal. The newly created Swiss federal state was politically completely dominated by the free-thinking movement in its beginnings. It provided the majority in the Federal Assembly and the entire Federal Council .

In 1847 the "Swiss People's Association" was brought into being. However, this fell asleep again after the state was founded in 1848. After 1847, the terms “radical”, “free-spirited” and “liberal” were used largely with the same meaning in the German-speaking world. As a rule, the liberals tended to be on the right politically, while the radicals or liberals tended to be center-left. In the French-speaking area, the difference between libéral and radical tended to be greater. Between 1860 and 1870, the third liberal force, the so-called Democratic Movement, stood up for the popular election of the authorities and for the introduction of initiative and referendum, partly against the dominant free-thinking movement. In 1873 the Volksverein awoke to new life when it came to revising the federal constitution . The organization fell apart again after the constitution was adopted. She had no guiding idea and no goal to fight for. In 1878 the “Radical-Democratic Group of the Federal Assembly” was founded, which combined with the Liberals, Radicals and Democrats various directions of the “Freethinkers”.

The various groups of the liberal movement were for the most part united on February 25, 1894 with the formal founding of the Free Democratic Party in the Olten railway station buffet . At times the Democrats formed an independent party. In addition, existed from 1913 to 2008 mainly engaged in the Protestant cantons in western Switzerland and in Basel anchored strongly federalist -oriented Liberal Party of Switzerland (LPS), but never national distribution took place in Basel (she lives to this day as Liberal Democratic Party continues ). In 1917 parts of the FDP were formed in the farmers, trade and citizens' party , today's SVP .

Proportional voting was introduced for the National Council elections in 1919 , which reduced the parliamentary mandates of the Liberals from 105 to 60 (from a total of 189) with 28.8% of the vote. In the Council of States, the FDP was still able to retain its absolute majority for two legislative periods with 23 mandates . Other parties were gradually integrated into the Federal Council. 1941/ 42 , the split Zurich Democrats from. However, they merged again with the FDP 30 years later in 1971. In 1947, the party co-founded the Liberal World Union, today's Liberal International .

The growing liberal women's movement led to the foundation of the Swiss Association of Liberal Women in 1949 . Until 1959, the party was still disproportionately represented in the Federal Council. But then the so-called magic formula was introduced, according to which the FDP only took two Federal Council seats. In 1979 the FDP started the parliamentary elections , in which it achieved 24.1%, with the slogan “More freedom and personal responsibility - less state” (often shortened to “More freedom - less state”), as the party's liberal core demand for more subsidiarity of a strong but lean state. The slogan was often used in the 1980s and was considered by some political observers to be a sign of the FDP's turn from a "bourgeois" position to support the state towards a classic, liberal "dismantling of the state". In 1982 the new liberal key program “Principles of modern liberalism” was drawn up, in which the liberal core ideas were thematized both up-to-date and in relation to Switzerland. After the parliamentary elections in 1983, the FDP parliamentary group formed the largest delegation in the National Council and the Federal Assembly with 23.3% of the vote - for the first time since 1928 . In the 1980s, two groups split off: the Free List in the canton of Bern to the left (1983) and the initially strong auto party to the right (1987). The threat image changed by the dissolution of the Eastern Bloc (1988/91) also had a negative effect on the proportion of voters in the FDP, Liberal Party and Christian Democratic People's Party , which had a strong anti-totalitarian profile ; later the growing influence of the EU and globalization and the associated fears led to a decline These parties voted in favor, while the Swiss People's Party and the Greens recorded an increase in votes.

Merger with the Liberal Party of Switzerland (LPS)

In the Swiss parliamentary elections in 2003 , the LPS narrowly missed parliamentary group status, which led to the establishment of the joint FDP / LPS parliamentary group in the Federal Assembly. Due to positive experiences of the group of factions, the party alliance Union of Liberals and Liberals was founded in 2005 . In 2008, the two Union parties, the FDP and LPS, decided to merge completely on a national level with effect from January 1, 2009 to form a joint liberal party, “FDP.The Liberals”.

On March 1, 2007, the women's groups of the FDP and LPS merged under the name “FDP-Women Switzerland - We Liberals” . The young liberals merged with the young liberals on April 12, 2008, whereby the name " Jungfreisinnige Schweiz " was retained, in French the new name is: "Jeunes Libéraux Radicaux Suisses".

In the cantons of Ticino and Jura , joint free-thinking liberal parties (“Partito liberale-radicale cantone Ticino” and “Parti libéral-radical du canton de Jura”) had existed for years. Later on, the cantonal parties of Freiburg , Neuchâtel and Valais, the Liberals and Liberals, also merged at cantonal level.

In 2008, the LPS and FDP announced their merger at a national level at a joint meeting of delegates next to the Bundeshaus in Bern, with the aim of founding a new Swiss liberal party. At the same place, the merger agreement was approved by the two parties in February 2009, so that the common party "FDP.Die Liberals" was founded retrospectively from January 1, 2009.