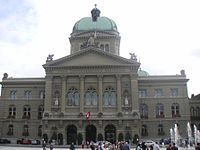 Bundeshaus in Bern:
seat of the Swiss parliament

The Swiss parliamentary elections in 1971 took place on October 31, 1971. The 200 mandates of the National Council and 31 of the 44 mandates in the Council of States were to be newly awarded. This 39th legislative period lasted four years until October 1975. It was the first National Council elections in which men and women were entitled to vote .

The big election winners were the two foreign parties, the Republicans (REP) and the National Action . The National Action increased from 1 to 4 seats, the Republicans were now represented with 7 seats. A smaller election winner was the EPP , which was able to increase its share of the vote , but did not win a seat. The newly founded SVP achieved a slightly lower share of the vote than its predecessor parties (BGB and Bündner Democrats) and had the same number of seats. The three major parties, the LPS and the 1967 election winners (LdU and PdA) lost share of the vote. This resulted in unusually high losses of seats for the Social Democrats (5 of their previous 51 seats) and the Landesring (13 instead of 16 seats).

There were no major changes in the Council of States. SPS and gained 2 seats. The SVP really lost its mandate because it was only able to hold one of the two Democratic Council of States seats from Glarus.

The turnout in the National Council elections in 1971 reached 56.9%, its lowest value at the time since the introduction of proportional representation in 1919, but fell even further in subsequent elections and reached its temporary low in 1995 at 42.2%.

More detailed on this: Council of States - electoral procedure

The nationwide results were as follows:

5
46
13
3
44
49
6th
23
7th
4th
5 46 13 3 44 49 6th 23 7th 4th
A total of 200 seats
1In 1967 Karl Dellberg was elected to the National Council on an independent social democratic list, but then rejoined the SP parliamentary group . Without taking this seat into account, the SP would only have lost four seats.
2 Result 1967 including DP Zurich
3 Result 1967 including DP Graubünden
4th in German: Independent Socialist Party
5 in German: Independent social movement
6th in German (analogously): National Progressive Party

Distribution of seats in the cantons

Results of the Council of States elections

Detailed results with votes from all candidates below

Detailed results of the Swiss Council of States elections