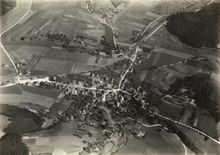 Wynigen [ˈʋiːniɡən] is a municipality in the Emmental administrative district in the canton of Bern in Switzerland .

The community is located northeast of Burgdorf on the border between the Emmental and Oberaargau in the Önz valley , from which the Wynigenbach branches off in the village of Wynigen. With an area of ​​over 2800 hectares (approx. 1660 hectares of agricultural land and 985 hectares of forest), it is the largest of the 24 municipalities in the former Burgdorf district .

Wynigen is first mentioned in a document in 1185. In the Middle Ages the village was subordinate to the Lords of Grimmenstein and on March 3, 1497 it became part of the city of Bern . In 1653 it was a scene of the Swiss Peasants' War . In 1887 the previously independent municipality of Brechershäusern was merged with Wynigen. In 1911 the merger with Bickigen-Schwanden became legally binding.

Several businesses are active in Wynigen.

In the hamlet of Bickigen there is an important transformer station in Switzerland's supply network , which is operated by the BKW power plant company. When substation running Gemmileitung between Creux-de Chippis and Laufenburg and several other high-voltage lines together.

Wynigen is connected to Kirchberg and the A1 motorway by a cantonal road . Furthermore, the village is accessed with two bus lines to Burgdorf and Herzogenbuchsee, which meet at Wynigen station and are coordinated with the trains.

Wynigen has a stop on the old route between Olten and Bern and is served hourly by RegioExpress trains on the Olten - Bern route. Since this train connection is counted as long-distance traffic despite the rather short distance, and Wynigen is not served by any S-Bahn or other regional trains, the Wyniger train station is the only pure long-distance train station in Switzerland along with that of Geneva Airport .

The reformed church is essentially medieval and was renewed in 1671 by Abraham Dünz . It has a Romanesque tower and inside a late Gothic strip ceiling and baroque grisaille paintings . In 1833 the pastor poet Jeremias Gotthelf was married in this church by his friend and official brother Gabriel Farschon. Next to the church is the rectory from 1630 with windows painted in late Gothic style. The farm in Brechershäusern was known as the Glungge farm in the Gotthelf films Uli the Knecht and Uli the Tenant .