Rüegsau is a municipality in the Emmental administrative district in the canton of Bern in Switzerland . 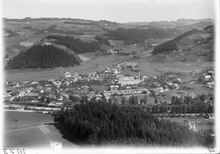 Aerial photo of Rüegsauschachen from 300 m by Walter Mittelholzer (1922)

Rüegsau is located in the lower Emmental . From the Emme along the Rüegsbach, the community comprises the villages of Rüegsauschachen, Rüegsau, Rüegsbach and Rinderbach as well as several hamlets. It has the shape of a rectangle about 2 km wide and 8 km long. The lowest point is on the banks of the Emme at 560 m. ü. M., the highest point on the Höchi above the Vorderen Almisberg at 841 m. ü. M.

The headquarters of Blaser Swisslube AG, one of the leading manufacturers of coolants and lubricants for the machine industry, and the engineering and surveying company of Hans Grunder , Grunder Ingenieure AG, are located in the municipality . In 2017 there were 67 farms in the municipality. 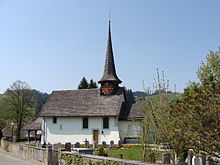 A small history museum is located directly on the Emme. The oldest church bells in Switzerland (from the 12th and 13th centuries) are located in the St. Blasius chapel in the Rüegsbach district . The main attraction, however, is the wooden bridge over the Emme between the communities of Hasle and Rüegsau.

The arched wooden bridge replaced a yoke bridge that was washed away in the Emmental in 1837 during the water crisis. Jeremias Gotthelf wrote about it:

« The Emme raged down the valley, hundreds of feet wide, almost from one Emmenrain to the other, to Hasle and the Rüegsauschachen. There the corner taverns had long since emptied themselves, fearfully leaving the triple yoke bridge, which with its narrow spaces prevented the masses of wood from free passage. Here, as in all upper places, no one thought of measures to shield the bridges, as was customary in earlier times and especially with the Hasle Bridge. The inhibited Emme reared fir after fir, Trämel after Trämel, the crashing piles of wood towered far above the bridge. On both sides the waters poured out with ever increasing violence and sought an uninhibited path for the current. A few more minutes and it would have been successful on the Hasle side. In the horror of death, the Kalchofen residents waited for the flood of water to break in, which devastated the entire upper castle area and would have dug a new bed for itself. The Rüegsauer fled through the rising water and there was a prayer everywhere that the bridge would want to move apart. »

The old bridge was washed away. In 1837 the Bern government approved the construction of a new arched wooden bridge. In 1955 this bridge was demolished and replaced by a modern concrete bridge. The wooden bridge was stored and rebuilt 600 m further down the Emme in 1957/1958. With an arch span of 60.15 m, it is the longest wooden arch tension bridge in Europe. and became the symbol of the communities Hasle and Rüegsau.

The station Rüegsau of BLS AG together with the community Rüegsauschachen used.

The name Rüegsau appears for the first time in a document from 1139 and comes from "ruggere aue", or "ruhe Aue". A Benedictine convent, the monastery of Rüegsau , which was abolished in 1528, shaped the entire medieval history of Rüegsau .

The community had 3260 inhabitants on December 31, 2018. After a significant population decline in the 1960s and 70s, the population has grown steadily since the 1990s.