Trubschachen is a municipality in the Emmental administrative district in the canton of Bern in Switzerland . 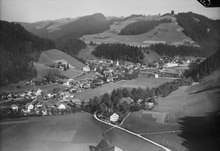 Around 1130, when the Trub Monastery was founded, Trubschachen (von Schachen in the sense of shrub forest along lakes and rivers, later also for grassland in such locations), together with Marbach, Schangnau and Escholzmatt, belonged to the monastery district of the Trub Benedictine Abbey. Until 1867 the community was officially called Lauperswil Viertel . In 1852 Trubschachen was confirmed in its autonomy by the Bernese municipal law and on January 1, 1868 the name was changed from Lauperswilviertel to Trubschachen.

On August 7, 1946, a Messerschmitt Bf 108 Taifun of the Swiss Army crashed not far from the train station. The plane flew into a cable of a material ropeway. Both pilots were killed.

Trubschachen is located south-west of the Napfbergland on the upper reaches of the Ilfis at the confluence of the Ilfis and Trueb at an altitude of 731  m above sea level. M. at the transition from Emmental to Entlebuch . Neighboring communities are Eggiwil , Langnau im Emmental and Trub .

The executive branch of the municipality is the seven-member municipal council . The council is the mayor before, at the time Beat Fuhrer ( glp , Booth 2016).

Trubschachen is internationally known for the Kambly biscuit factory and the Jakob rope factory .

Trubschachen is on the Lucerne – Bern railway line and Hauptstrasse 10 runs through the town, further east to Entlebuch and Lucerne. West to the French border at Les Verrières .

From 2015 to 2017 Trubschachen was one of the first villages in the country to switch all street lighting to intelligent LED lamps. The first 30 km / h zone was implemented in the village in 2019 .

In Trubschachen there has been, since 1997, The Traveler , a woman statue by the Chur sculptor Robert Indermaur (* 1947) at the train station . A similar sculpture can also be found at Thusis train station . The allegedly oldest bear is in Trubschachen, the Gasthof zum Bären is first mentioned in a document in 1356.