Until December 31, 2015, Niederösch was a political municipality in the Emmental administrative district of the canton of Bern in Switzerland . On January 1, 2016, it merged with Ersigen and Oberösch to form the municipality of Ersigen.

Niederösch lies at 485  m above sea level. M. , seven kilometers north of the city of Burgdorf (as the crow flies). The former street and stream line village stretches along the Ösch and its left tributary Chänerechbach , on the eastern edge of the wide alluvial plain of the Emme , in the Swiss plateau .

The area of ​​the 4.6 km² former municipality covers a section of the central Bernese plateau. The western half of the area lies in the flat Emme plain (on average at 485  m above sea level ) and extends over the agriculturally intensively used Allmend to the edge of the Lindenrain . The eastern part lies in the Molasse hill country , which was shaped by the Ice Age Rhone glacier . The community soil extends into the valley basin of the lower section of the Chänerechbach , which is flanked on the north side by Tannwald ( 522  m above sea level ) and Hasli (up to 550  m above sea level ), on the south side by the height of the Buechwald . On the Buechwald is at 591  m above sea level. M. reached the highest point of Niederösch. In 1997, 6% of the municipal area was accounted for by settlements, 26% for forests and woodlands and 68% for agriculture.

Until the second half of the 20th century, Niederösch was a village dominated by agriculture . Even today, the have farming , the fruit-growing and cattle breeding an important role in the employment structure of the population. Some other jobs are available in local small businesses and in the service sector. Many workers are commuters who work mainly in the Burgdorf region and in the Solothurn area .

The former community is very well developed in terms of traffic. It is only a few hundred meters next to Hauptstrasse 1 from Bern to Zurich . The nearest connection to the A1 motorway (Bern-Zurich) is around 6 km from the town center. Niederösch is connected to the public transport network by a bus line operated by Regionalverkehr Mittelland AG , which serves the Koppigen to Burgdorf route. 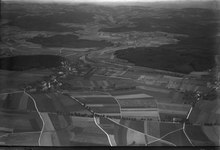 The place was first mentioned in a document in 886 under the name Osse ; from 1309 the name Oescho has been handed down. These two names cannot be clearly assigned to Niederösch or Oberösch. For the first time, a distinction is made between the two localities in 1310 ( inferioris Oeschge ); In 1360 Nidernösch appears .

In the High Middle Ages , Niederösch first belonged to the Kingdom of Hochburgund and the royal court of Kirchberg. Later, the village was under the sovereignty of the Zähringer and from the 13th century under that of the Kyburger . It was temporarily owned by the Thorberg monastery. Since 1423 Twing and Bann lay with the city of Burgdorf. Under the rule of Bern, Niederösch was assigned to the Landvogtei Wangen. After the collapse of the Ancien Régime (1798), the village belonged to the Burgdorf district during the Helvetic period and from 1803 to the Burgdorf Oberamt, which received the status of an official district with the new cantonal constitution of 1831.

In the old town center there are numerous characteristic farmhouses in the Bernese country style from the 18th and 19th centuries. The mill dates from 1813, the mill stock from 1797. Niederösch does not have its own church, it belongs to the parish of Kirchberg.