Oberburg is a municipality in the Emmental administrative district in the canton of Bern in Switzerland . 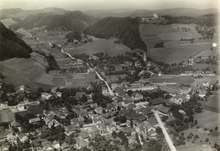 Oberburg lies at 547  m above sea level. M. , 2 km south of the city of Burgdorf (linear distance). The hamlet extends Emmental , on the western edge of here around 1 km wide Talniederung the Emme , in Molassehügelland the higher Swiss Central Plateau .

The area of ​​the 14.1 km² municipal area covers a section of the Emmental. In the east, the arbitrarily drawn border runs in the valley floor of the Emme and separates the station quarter, which structurally belongs to Oberburg, with commercial zones from the community. The Emmenschachen was formerly used jointly by the Anstösser communities of Burgdorf, Oberburg and Hasle bei Burgdorf as Allmend. However, after disputes over the use broke out between the communities, the area was divided up in 1704 so that the part to the east of Oberburg now belongs to Burgdorf.

From the valley floor, the municipality extends to the southwest to the adjacent Molasse heights with Rothöchi ( 691  m above sea level ), Gibelwald ( 715  m above sea level ) and Hasliberg (up to 800  m above sea level ). Between Rothöchi and Gibelwald, the Luterbach valley flows into the Emmental with a 300 m wide flat valley floor. Together with the Unterbergental, it once formed a meltwater channel on the edge of the Ice Age Rhone Glacier . The municipal ban extends further south into the upper Luterbach valley. The landscape is characterized by numerous short side valleys and ditches, which are separated from each other by ridges (so-called harrows). These often show very steep slopes, which makes agricultural work in the area difficult. For this reason, forests and pastureland predominate in the higher elevations. The hill country in the area of ​​the upper Luterbach valley reaches average heights of 750 to 850  m above sea level. M.

Oberburg also has two exclaves , each with an area of ​​around 1 km². The exclave of firs is located in the source area of ​​the Luterbach. Here is at 899  m above sea level. M. on the hill above the Tannehüsli reached the highest point of Oberburg. In contrast, the Rohrmoos exclave ( 564  m above sea level ), which includes a hollow west of Burgdorf and is surrounded by the hills Oberholz ( 633  m above sea level ), Pleerwald and Rohrmishubel ( 611  m above sea level ), shows significantly smaller differences in relief. In 1997, 8% of the municipal area was in settlements, 34% in forests and woodlands, 57% in agriculture and a little less than 1% was unproductive land.

Numerous hamlets, groups of farms and individual farms belong to Oberburg, which are widely scattered in the valleys and on the hills southwest of the village. The important ones are:

Up until the second half of the 19th century, Oberburg was a predominantly agricultural village. Thanks to the water impact (canal and streams) and the favorable traffic situation, numerous commercial operations developed early on, for example a hammer forge in the 17th century. In the 19th century weaving mills, brickworks and foundries were added.

Because of the large surrounding area, agriculture , fruit growing as well as cattle and dairy farming still play an important role in the income structure of the population. Numerous other jobs are available in the commercial and service sectors.

Larger commercial and industrial zones developed along the main road on the northern and southern outskirts as well as in the station district, which, however, politically belongs to Burgdorf. Various companies from the electrical industry, the building trade, mechanical engineering, precision mechanics, IT and wood processing are represented in Oberburg today. Individual companies are known throughout Europe, such as Jenni Energietechnik AG , a company that uses solar energy .

In the last few decades Oberburg has also developed into a residential community. Many employees are therefore commuters who work mainly in Burgdorf and in the Bern agglomeration.

The community is very well developed in terms of traffic. It is located on the main road from Burgdorf to Langnau in the Emmental . The nearest connection to the A1 motorway (Bern-Zurich) is around 7 km from the town center. On May 12, 1881, the railway line from Burgdorf to Langnau was opened with the Oberburg station (on Burgdorf municipality). A bus line runs every half hour in the direction of Burgdorf and Shopingmeile and Tschamerie, Hasle-Rüegsau (temporarily).

The place was first mentioned in a document in 1240 under the name Obrunburc . Later the names Obirnburch (1242), Oberenburch (1250), Obrunburch (1251) and Oberburg (1376) appeared. The place name means at the upper castle (in contrast to the lower castle in Burgdorf). This high medieval "upper castle" stood on the Rothöchi.

The Lords of Oberburg have been mentioned since the first mention, whose rule was under the suzerainty of the Counts of Kyburg . In 1406 the village came under Bern rule from the Kyburgers and was assigned to the Burgdorf mayor's office. Because of the suppression by the Burgdorf lords, an uprising broke out in 1653, but it was suppressed.

After the collapse of the Ancien Régime (1798), Oberburg belonged to the Burgdorf district during the Helvetic Republic and from 1803 to the Burgdorf Oberamt, which received the status of an official district with the new cantonal constitution of 1831. With industrialization in the second half of the 19th century, Oberburg experienced a modest economic boom.