Ersigen is a municipality in the Emmental administrative district in the canton of Bern in Switzerland .

Ersigen is 500  m above sea level. M. , 5 km north-northwest of the city of Burgdorf (linear distance). The former road and stream line the village stretches along the Ösch , on the eastern edge of the flood plain of the Emme and Molassehöhe of the foot Loberges , in the Swiss Plateau .

The area of ​​the 8.8 km² municipal area covers a section of the central Bernese plateau. The western half of the area lies in the flat Emme plain (on average at 495  m above sea level ) with the plateaus of Furtrain ( 508  m above sea level ) and Aspli ( 505  m above sea level ). In the extreme west, the traffic axes of the A1 motorway and the railway form the border. The Ösch, which drains the entire area, emerges from the Molasse heights into the plain at Ersigen, but here describes a sharp bend and flows north along the eastern edge of the plain.

Ersigen includes the hamlet of Rudswil ( 494  m above sea level ) on the right of the Ösch on the eastern edge of the Emme level, extensive residential quarters on the southern slope of the Loberge and a few individual farms. Neighboring communities of Ersigen are Koppigen , Alchenstorf , Rumendingen , Kirchberg (BE) and Utzenstorf .

Ersigen was a predominantly agricultural village until the second half of the 20th century . Even today, arable farming , fruit growing , cattle breeding and forestry have a certain role in the income structure of the population. Numerous other jobs are available in local small businesses and in the service sector. Today in Ersigen there is a pottery and a plow factory as well as construction, IT, electrical engineering, joineries and graphic studios. In the last few decades the village has developed into a residential community thanks to its attractive location. Many employees are therefore commuters who work mainly in the Burgdorf region and in the agglomeration of Bern .

The community has good transport connections. It is located on the old country road from Kirchberg to Koppigen; the main road 1 from Kirchberg to Herzogenbuchsee now runs outside the village. The nearest connection to the A1 motorway (Bern-Zurich) is around 4 km from the town center. Ersigen is connected to the public transport network by a bus line operated by the Mittelland regional transport service , which serves the Koppigen to Burgdorf route.

The earliest evidence of human presence in today's municipal area comes from the Neolithic . Burial mounds from the Hallstatt period were found on the Allmend , while traces of a Roman estate were discovered on the Murain in the Emme plain .

The name of the part of the village Rudswil also comes from the Alemannic settlement period. It can be traced back to the Old High German name Ruozo . The Rudswil area was settled later than that of Ersigen. The first mention of a possible merger between Ersigen and Rudswil comes from the year 1329: Rutzwile bi Ergsingen .

Since the Middle Ages , a ministerial family von Ersigen, initially under the sovereignty of the Zähringer and later under that of the Kyburger , has been mentioned. The area changed hands in 1367 to the Knights of Thorberg and in 1397 to the Thorberg Charterhouse . Under Bernese rule Ersigen was assigned to the Landvogtei Wangen, which exercised the high jurisdiction, while the lower jurisdiction was incumbent on the Landvogt, who resided on Thorberg, from 1528.

After the collapse of the Ancien Régime (1798), Ersigen belonged to the Burgdorf district during the Helvetic Republic and from 1803 to the Burgdorf Oberamt, which received the status of an official district with the new cantonal constitution of 1831. By dumping the Ersiger Moos in 1868, new cultivated land was gained.

In the old town center there are numerous characteristic farmhouses in the Bernese country style from the 18th and 19th centuries. Ersigen does not have its own church, it belongs to the Kirchberg parish.

There is an old spring in the hamlet of Bad, above Rudswil. From there you have a view of the Central Plateau and the Jura. The old bath is now privately owned. 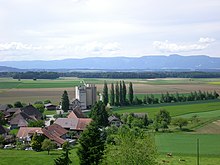