Hindelbank is a municipality in the Emmental administrative district in the canton of Bern in Switzerland .

Hindelbank lies at 519  m above sea level. M. , 6 km west of Burgdorf and 12 km northeast of the canton capital Bern (linear distance). The long-drawn street village extends in a slightly undulating landscape on the southern edge of the flood plain of the Emme , at the foot of the tertiary sandstone of higher Swiss Central Plateau .

The area of ​​the 6.7 km² municipal area covers a section of the Bernese Mittelland. The relief was shaped by the Rhone Glacier during the Ice Age ; it is slightly wavy and filled with ground moraine material. The northern border runs for a short distance along the canalised Urtenen , otherwise the area is limited to the west and north by the traffic routes of the A1 motorway and the new line of the Bern-Olten railway line ( Bahn 2000 ).

From here, the municipality extends to the southeast over a gently sloping slope into the Chräiholz and the Plateau des Mooses . This is followed by the first wooded hills of the Molasse heights, namely the Schnarz ( 627  m above sea level ) in the far south and the Haselberg in the southeast, on the 645  m above sea level. M. the highest point of Hindelbank is reached. In the far north, the Heidmoos nature reserve in the Hurstwald belongs to Hindelbank. In 1997, 16% of the municipal area was accounted for by settlements, 22% for forests and woodlands and 62% for agriculture.

Up until the beginning of the 20th century, Hindelbank was a predominantly agricultural village. Gradual industrialization began in 1888 with the establishment of a yeast factory; later a biscuit factory and a laundry were added.

Even today, arable farming , fruit growing and animal husbandry have an important place in the income structure of the population. Numerous other jobs are available in local small businesses and in the service sector. In addition to the companies already mentioned, small and medium-sized companies in the construction, textile, mechanical engineering, transport, mechanical workshops and gravel and concrete works are now represented in Hindelbank. Hindelbank is the location of a secondary school. In the last few decades the village has also developed into a residential community. Larger residential quarters emerged mainly on the eastern edge of the village. Many employees are therefore commuters who work mainly in the Burgdorf region and in the agglomeration of Bern.

The only prison for women in German-speaking Switzerland is located on the grounds of Hindelbank Castle .

The community has good transport links. It is located on main road 1 from Bern to Zurich , from which a connection to Burgdorf branches off. The nearest connection to the A1 motorway (Bern-Zurich) is around 5 km from the town center. On June 16, 1857, the railway line from Herzogenbuchsee to Bern with a station in Hindelbank was put into operation. The bus route 451 of Postauto Schweiz AG, which operates the route from Hindelbank via Krauchthal to Bolligen , ensures the fine distribution in public transport .

Some remains of the wall to the west of Hindelbank indicate that the municipality was settled during Roman times . The place was first mentioned in a document in 1261 under the name Hindelwanch . The names Hundelwanc (1275), Hundilwanch (1295), Hundelwang (1328) and Hindelbank (1401) appeared later . The place name probably goes back to the Old High German words wang (meadow) and hintila (hind) and therefore means meadow where hinds graze . This interpretation of the place name served as the basis for the design of the municipal coat of arms . Other sources interpret the name as the meadow of the Hundilo .

Since the Middle Ages , Hindelbank formed its own rule under the suzerainty of the Counts of Kyburg . The rulership, which initially belonged to the Münzer family in Bern, has seen numerous changes of ownership since 1363 before it came into the possession of Hieronymus von Erlach in 1721. At the same time, the Bäriswil dominion was incorporated into that of Hindelbank. In 1406 Hindelbank came under the sovereignty of Bern and was assigned to the Zollikofen district court .

After the collapse of the Ancien Régime (1798), the village belonged to the Burgdorf district during the Helvetic period and from 1803 to the Burgdorf Oberamt, which received the status of an official district with the new cantonal constitution of 1831. From 1839 to 1918 the state seminar for teachers was located in Hindelbank. 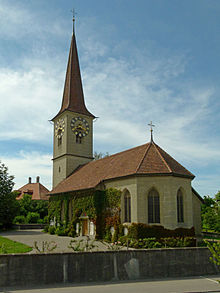 The core of the Reformed Church of Hindelbank dates back to the early 16th century. After a fire, the church was largely rebuilt by Karl Indermühle in 1911–1912. The church has one of Johann August Nahl (the Elder) created grave plate for Maria Magdalena Langhans . The grave slab was one of the most admired works of art in Europe in the 18th century. It attracted many educational travelers, u. a. also Johann Wolfgang von Goethe after Hindelbank.

On the slope south of the village stands Hindelbank Castle , built in 1720 for Hieronymus von Erlach by Daniel Stürler according to plans by Joseph Abeille (today the administration building of the Hindelbank prison ), which was built on the site of a castle from the 15th century. It is a four-wing complex with a baroque garden. Modern buildings of the women's prison are attached.