The Marienberg Bridge, built in 1859 as a wooden Joch Bridge

A Jochbrücke , also Pfahljochbrücke or Pfahlbrücke , is a bridge in which the roadway rests on Pfahljochen . These are pairs of piles rammed vertically into the river bed with beams laid across the piles to support the superstructure of the bridge. The building material is usually wood , less often concrete or steel .

Yoke bridges are among the oldest types of bridge. In Zurich remains were v of the 1525th Found that belong to a wooden bridge Rapperswil – Hurden . The Celts and Romans also knew the Jochbrücke. Julius Caesar , for example, had a bridge built using this technique over the Rhine at Neuwied near Bonn in just ten days , which was 400 m long and is known as Caesar's Rhine Bridge .

Many stone bridges had yoke bridges as their predecessors, which are no longer preserved today. One of the oldest still standing yoke bridges in Europe is likely the Chapel Bridge in Lucerne . It was built in the 14th century and initially also served as a battlement . The disadvantage of yoke bridges are the relatively small openings, which on the one hand hindered shipping and rafting, on the other hand were prone to being blocked with floating debris or ice during floods, so that the structure was damaged or destroyed. Another disadvantage of wooden yokes is the only temporary wetting of the wood of the yoke posts or yoke stands with increased rotting above the water surface.

Yoke bridges are still used today as temporary bridges because they can be set up quickly and make little demands on the individual components. But they are also used for fixed structures - either as structures for side streets in wood, as in the case of the Werder Spree Bridge built in 1991, or in concrete or steel construction together with slab superstructures . One of the longest yoke bridges is likely the Lake Pontchartrain Causeway in the USA , which runs 38 km through a shallow lake near New Orleans . 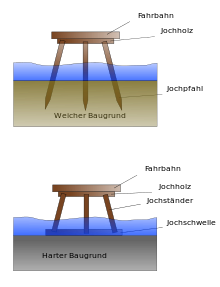 Yokes like those used for yoke bridges.
above: Pfahljoch
below: Schwelljoch

A yoke or Pfahljoch is in the construction a number is rammter piles up with a horizontal ceiling beams, the yoke section or Jochholz are connected. A row of such yokes is rammed into the river bed and connected in the longitudinal direction with beams, on which there are usually further beams in the transverse direction, which form the roadway.

If the subsoil is too hard to drive piles in, a yoke sleeper is laid on the ground , in which the yoke posts are attached. This type of yoke is called Schwelljoch .

The outer piles of bridges that are located in strongly flowing waters are usually driven in at an angle in order to be able to better withstand the forces caused by the current. Sometimes additional piles are driven in front of the yokes to keep drift ice and other floating debris away from the yokes. The wooden construction is mostly made of oak , as this wood is most durable in water. Mostly they are treated with tar to prevent them from drying out and shrinking. As early as the Middle Ages, the posts were provided with pole shoes . This iron fitting simplifies driving the piles.