The Chapel Bridge is the landmark of the city of Lucerne in Switzerland and one of its most important tourist attractions.

The Chapel Bridge is the oldest and with 202.90 meters (including canopies 204.70 meters) the second longest covered wooden bridge in Europe , after the wooden bridge Bad Säckingen – Stein AG (203.70 meters, including canopies 206.50 meters). It was built around 1365 as a battlement and connects the old and new town ( minor town ) separated by the Reuss . Originally the bridge was longer; When the bank was filled in , a piece about 75 meters long was broken off around 1835. In the gable of the bridge there were 111 triangular paintings (before the fire in 1993) depicting important scenes in Swiss history .

The images of the Chapel Bridge , the Spreuer Bridge and the Hofbrücke are unique in this use. In no other city in Europe are covered wooden bridges decorated with triangular images.

The construction of the Chapel Bridge must be seen against the background of urban development and the construction of fortifications. Between 1230 and 1270, the city grew from the land side towards the water and the small town also expanded on the left bank of the Reuss. During this time the inner ring of fortifications of the big city was built and the inner ring was also built in the small town. Bridges were built to connect the different parts of the city. Even before the Chapel Bridge was built, the Reuss Bridge, located at the narrowest point of the Reuss, was built around 1168; a second bridge, the wooden-covered Hofbrücke, was built between 1252 and 1265 on the right bank of the lake between the court district and the city. While the city was secured from the land side by its defensive structures, there was a lack of protection from the lake side and the banks of the Reuss. Therefore, the water tower was first built around 1300. A few decades later - the year 1332 is considered likely - the construction of a second wooden-covered bridge, the Chapel Bridge, was a continuation of the Hofbrücke. The fact that the Chapel Bridge (like the Hofbrücke, which was demolished in the first half of the 19th century) should serve as a defense against potential ship attacks, is indicated by the “buzzing” (row of palisades) off the lake, which should prevent ships from passing through. The higher built bridge parapet towards the lake side also indicates the defensive character of the bridge. For centuries the Chapel Bridge fulfilled a double function as a battlement and connection (pedestrian bridge) between the small town and the courtyard, more precisely between the right bank and left bank corner (Freienhof) of the city fortifications. 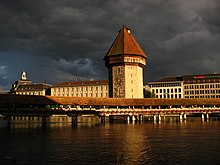 Partial view of the Chapel Bridge with the water tower

Flowers on the bridge

Near the left bank is the octagonal water tower , which was built around 1300, i.e. before the Chapel Bridge, and can be reached from there via a short cross passage. The tower served alternately as a watchtower and cornerstone of the city ​​fortifications , as a city ​​archive and treasury, and as a dungeon and torture chamber . Today it houses a souvenir shop as well as the club bar of the Lucerne artillery club .

The bridge fell victim to a conflagration on the night of August 18, 1993, which is believed to have been triggered by a discarded cigarette. The fire destroyed a large part of the bridge and among other things 78 of the 111 famous pictures. After the fire, the remains of 47 pictures were recovered. 30 pictures could be restored by 1998. The bridge was immediately rebuilt, inaugurated on April 14, 1994 and again opened to pedestrians.

The 25 gable paintings, which were relocated when the bridge was shortened around 1835 and show the development of Saint Mauritius as the patron saint of Switzerland, were hung in the middle section of the bridge to replace the unrestorable burned exhibits. At the two outer seams between the originally preserved and the reconstructed bridge part, charred remains of the original pictures are reminiscent of the fire.

The cycle of images

One of 110 triangular paintings

The picture cycle originally comprised 158 panels. 147 pictures were preserved until 1993, of which 110 pictures were shown there after the bridge was shortened in the 19th century. The wooden panels are or were at the base between 150 and 181 cm wide and 85 to 95 cm high. Each board consisted of three to five spruce boards. Only a few were made of linden and maple wood.

The cycle of pictures was created during the time of the Counter Reformation , in which the city leaders propagated loyalty to the Catholic Church in an evangelical reformed environment . In this sense, the tablets are propaganda . The depictions from Lucerne and Swiss history were intended to remind people when passing the bridge on the way into the city that a pious way of life - this also includes service in the military - and happiness in life go hand in hand. At that time, a good Swiss was someone whom the city and republic of Lucerne could lend to France and other countries in pay contracts . It began on the left bank of the Reuss next to the Jesuit Church with the image of the Giant von Reiden and ended with the representation of the Jesuit College, today's Ritterschen Palais. This vigorous, mythical giant was considered the origin of the strong and powerful Lucerne people.

The concept for the large series of panel paintings came - on behalf of the council - from the town clerk Renward Cysat . Each council member (in the inner and in the grand council) could donate a plaque for himself and his wife. To identify the donors, their coat of arms was affixed at the bottom left, and the women's coat of arms on the opposite side. Verses on the frame of each picture explain and complement the picture. It was thereby also protected against "misinterpretation". In addition to Lucerne's image of history, the way back was about the life and death of Saint Leodegar , Lucerne's city ​​patron , and the legends of the Swiss patron saint, Saint Mauritius .

The Catholic painter Hans Heinrich Wägmann, who had left Zurich and was naturalized in Lucerne, and his four sons who worked in his workshop received the lucrative major commission. Wägmann, a representative of the late Renaissance , first made a sketch of the planned picture on paper. Some designs have survived to this day. (The oldest known map of the Canton of Lucerne also dates from 1613 by him and Renward Cysat.)

For protection, the pictures on the Chapel Bridge are overhanged with Carnival pictures during the carnival season . These are designed by various carnival organizations or Guggenmusigen and are hung up anew every year.

Copies were made of the 146 pictures, including the 86 destroyed in the fire. A dispute has broken out over whether only the unburned originals or also the copies should be attached to the rebuilt bridge. In November 2014, an initiative to hang up 146 copies of the bridge pictures was rejected in a referendum.