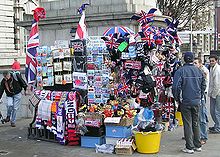 Cup made by the Fürstenberg porcelain factory with the inscription: Berlin Olympics 1936. The haven of peace 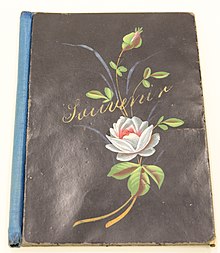 Writing case, souvenir, dating: around 1870, in the MEK's inventory

A souvenir (in French le souvenir , 'reminder', or French se souvenir , 'remember' meaning 'memento', then specifically 'souvenir') is an object that is used as a reminder of a certain event, place or a person is taken and kept. The word comes from French and means here memory, souvenir . In contrast to a trophy , souvenirs are usually bought for yourself and those who stayed at home while on vacation . This is often something typical of the country. But also cups ( collecting cup ), T-shirts, ashtrays, key rings , snow globes , salt and pepper shakers, stick nails , embossed coins or alienated banknotes and coat of arms tags etc. with printed names of the places visited or pictures of the same are popular. In many holiday regions, the sale of souvenirs to tourists is a steady source of income for the locals. Often there are also miniatures of well-known buildings such as the Eiffel Tower , the Brandenburg Gate , the Cologne Cathedral , etc.

Souvenirs are harmful when tourists take cultural treasures, rare animals , plants or even “just” stones with them. Some states impose draconian penalties for unauthorized export of such items. In this context, it can be confusing that real cultural goods (e.g. antique pieces) can often hardly be distinguished from copies made especially as souvenirs.

Also Souvenir sometimes used jokingly, a can sunburn an unpleasant souvenir from the south to be, even a pregnancy lifelong keepsake mean.

The American pop singer Bill Ramsey had a big hit with his music track Souvenirs, Souvenirs in 1959. The text ironically describes the essence of souvenirs.

Artist duo Andreas Eucker and Frank-Udo Tielmann dealt with the souvenir. In 1992 they placed an octagonal pavilion in the Kunsthalle Bielefeld , in which they draped industrially manufactured souvenirs. Through consistent self- kitsch, they pointed out the connection between tourism, art and kitsching of art by the museums themselves. The differentiation between original and souvenir has been abolished. The exhibits could be purchased in identical form at the museum's kiosk.

The Museum of Applied Arts and the Museum of Communication in Frankfurt am Main had a joint exhibition on these crutches of memory with a verbose catalog until autumn 2006.

Sociology and Psychology of the Souvenir 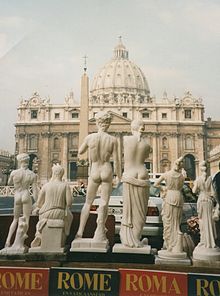 Souvenirs are not for sale per se. As found objects (e.g. flotsam, stones, splinters of paint or broken fragments of well-known structures, e.g. by wall woodpeckers ), they constitute their meaning through the attribution of the souvenir owner, so they cannot generally be recognized as such as souvenirs. The preference for such souvenirs also seems to be related to a differentiation from the commercialized souvenir industry.

Often the purely souvenir character of a souvenir is exceeded. A souvenir can be a devotional item (purchased in a place of pilgrimage ) or a political statement.