As grisaille (French for monotony , derived from French gris , gray ') refers to a painting which is performed exclusively in gray, white and black. In the case of other light or dark tinted colors, one speaks of monochrome painting (French: Camaieu ). It is based on a pure shadow effect . A form of grisaille is also used in glass painting . In the Netherlands this technique is also called penschilderij or pentekening .

Grisaille is a technique that was used in particular in medieval panel painting . One example of this is the Heller Altar , which was painted by Matthias Grünewald and Albrecht Dürer . The inactive wings on which the saints, painted in grisaille, look like sculptures in wall niches come from Grünewald.

In the glaze technique , a first layer in grisaille technique is used to describe and hold the shapes and the light in a painting independently of the later coloring. After this first layer has dried, the grisaill layer is colored in transparent layers, so that light on the shapes and coloring are worked out separately from one another. In order to reproduce more realistic color tones of the human skin, a monochrome light green first layer of paint was used in the painting of the Renaissance in figurative representations, which gave this variant the name Verdaccio . This painting technique corresponds to the typical skin tone , which would appear lifeless without the fine veins of the blood and lymph vessels showing through.

A well-known example of grisaille painting is John the Baptist preaching by Rembrandt in the State Museums in Berlin - Prussian Cultural Heritage , created around 1634/35. In the 20th century, Pablo Picasso's Guernica and Gerhard Richter's October 18, 1977 showed a modern use of this form of painting.

In the Baroque period , grisaille painting was typical for the ornamental decoration of Reformed churches , since, in contrast to polychrome painting or stucco, it corresponds to the Zwinglian principle of simplicity. Well-known examples of this are the Gränichen Church or the Bätterkinden Church . In addition, grisaille arabesques and other ornamental or figural motifs were also widespread in Catholic churches and monasteries.

Grisaille technique in watercolor and gouache painting was also used in the late 19th and early 20th centuries; especially in landscape painting as printing templates for black-and-white letterpress printing, since color printing for this was not yet available or only as lithographs . So z. B. for the illustrations in the Alpine Club yearbooks and magazines such as Illustrierte Welt . Performers were well-known artists such as Zeno Diemer and ET Comton . 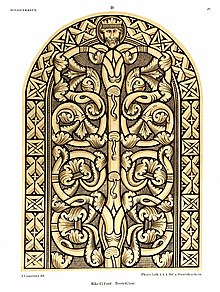 Grisaille motif in the cloister of Heiligenkreuz Abbey

In order to still achieve an attractive aesthetic for the windows of their monastery buildings despite the instructions from their General Chapter for a simple design, the monks of the Cistercian order often used the grisaille technique. The central general chapter of the order gave the monasteries clear rules for the windows: They should be designed white, without crosses and without the usual colored images of biblical figures. The friars of some monasteries developed their own style from the grisaille technique by painting white-milky discs with various forms of plant ornaments such as tendrils and foliage (see section grisailles technique in the article Kloster Lehnin ). 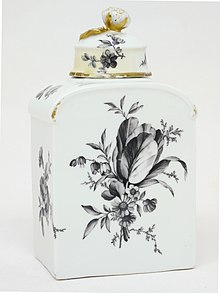 Grisaille painting on a tea pot, around 1768

The term grisaille painting , also called black solder painting , is used in porcelain painting as a technical term for paintings only in shades of gray.