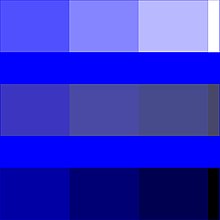 The monochrome painting , and monochrome (monochrome, monochromatic color scheme, Einfarbmalerei, monochromatic color harmony monochromatic monochrome or color scheme) refers to a color relationship (color scheme), in which a single color plays a dominant meaning the work. One color is used as the base color (accent color, base tone, dominant color, base tone, main color) and is usually supplemented with light-clear (whitened, white-lightened), gray-cloudy (gray) or dark-clear (darkened, black-darkened) nuances of this color . Contrasts are generally weak or nonexistent. An example is blue, combined with light blue, gray blue, dark blue and corresponding shades.

The term monochromy comes from the ancient Greek μὀνος, monos = "unique" and χρῶμα, chroma = "color". The Roman writer Pliny the Elder (23/24 AD - 79 AD) named "Monochromata" as a technical term in painting. At that time, the term mainly referred to paintings in red on a white background (singulis coloribus). 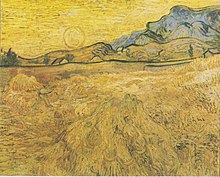 Monochrome in shades of yellow. Vincent van Gogh: Wheatfield with a reaper, 1889.

Monochrome can be applied to all areas in which color plays a role, for example architecture, design, film, photography, art, handicrafts, nature, ornamentation, advertising or home furnishings. This term does not include graphic works , although washes in ink are seen as a borderline case, such as Chinese ink painting .

In his Blue Period (1901–1905), Pablo Picasso painted monochrome pictures in blue. The artists of Cubism (ca. 1907-1925) apply the monochrome in their paintings by painting their splintery shapes and cuboid structures in earthy gray-brown tones and light-dark shades. Kazimir Malewitsch (1878–1935) produced several paintings with the title " The Black Square " from 1915 onwards . In modern art, color field painting is largely a monochrome painting.

Raimund Girke was one of the most important representatives of German monochrome painting . In a large article in zeitmagazin , a supplement to the weekly newspaper Die Zeit , he was once referred to as "The White Giant", which is related to his limitation to the color white, which he began in 1957 and which he then only modulated to a small extent, initially very constructively , often limited to basic shapes such as circles and squares, later also more revealing with a strong tendency towards gestural painting . But the color was always limited to white and shades of white into gray and blue.

The equality of colors is a rare, special form of monochrome. It exists when there is only a single color without shades and variations in color. This single color has no relation to any other color, only to the background or the surroundings. The color works on its own, especially in a huge area of ​​color. The focus is then on the abstract effect of the pure color. One example are the paintings by Yves Klein (1928–1962) in his typical, international Klein-Blau ( International Klein Blue (IKB)). A surface in a single color can appear monotonous, boring, but also calming, meditative, focused and stimulating to the imagination. 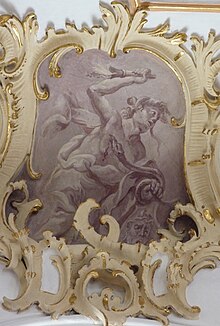 Achromatic color relationship in shades of gray. Grisaille. Ceiling fresco in the parish church of St. Michael in Lutzingen.

Camaïeu in shades of green. Porcelain plate with dove in Camaïeu painting.

The name camaïeu comes from the French "peinture en camaïeu" ("painted like a cameo "). The camaïeu describes a monochrome that is mainly used for decorative purposes, such as in porcelain painting. Often used are blue, iron red, copper green, purple (magenta) and sepia. The Camaïeu is possible in all painting techniques and on different painting surfaces such as glass, wood, canvas and porcelain. If you only use yellow tones, this subspecies is called cirage. If one uses gray tones, one speaks of grisaille. If only shades of blue are available, they are blue paintings .