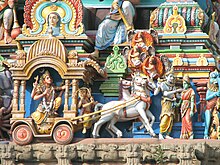 Polychrome figure decorations on a temple tower in Chennai

The color design used in painting, handicrafts, sculpture and architecture is called polychromy .

The polychromy can be found in almost all epochs and cultural areas, for example in the Egyptian pyramids , the Minoan palaces, in Greek and Roman temples, in Islamic domes, in medieval art and in the figural decorations of Indian Hindu temples . In the stone sculpture of the Renaissance , however, the monochrome (monochromy) prevailed, which also remained dominant in the Baroque and Classicism . In the second half of the 19th century, polychromy broke its ground again and spread, especially after the Second World War, in film , advertising , pop art and plastic.

The opposite of polychromy is monochrome , where only one color is used. Polychromy, which is based on the use of different colored stones, is also known as polylithy . See also incrustation (architecture) .