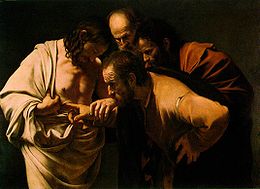 In the performing arts as well as image processing, shadow effect refers to the representation of shadows .

While sculpture - right up to the relief - can fall back on actual shadows, representations in the surface in painting, photography, but also in modern image processing rely on an imitation in the sense of an optical illusion . The shadow cast by an object can be determined when designing an image using the methods of representing geometry .

In the representation of shadows, the sculpture makes use of the spatiality of its work. Sculpture is also known as “playing with light and shadow”.

However, while painting and related representations can fix a certain desired shadow cast, the sculptor must expect that the lighting of his object will change when it is set up later. Therefore, he can only specify shadow effects within a certain framework.

Construction of the shadow

The course of the light-dark border of the shadow is determined by the physical laws of optics, as a beam path from the light source via the object to the shaded area. The real conditions can be simulated constructively. Representing geometry deals with the construction of the shadow of a drawn object in a spatial or projective representation on the two-dimensional image plane . Shadows for central lighting, parallel lighting as well as penumbra for several sources can be constructed. Shadow conditions for diffuse light are structurally difficult to solve.