Hatching in a technical drawing

A hatching (from Italian sgraffiare , "scratch", compare sgraffito ) is the totality of many fine, equally spaced lines that characterize the properties of a surface in technical, cartographic and artistic drawings and graphics.

In biology, hatching- like drawing of birds and other animals is called dashed lines .

Overall, the hatching always serves to make a graphic easier to read and / or to make it appear more vivid (spatial). Hatching is of particular importance in black and white representations, while the increasingly simple availability of color representations is increasingly displacing hatching (e.g. when printing ).

Selection of hatches according to DIN ISO 128-50 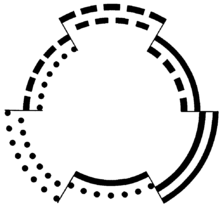 Hatching is in technical drawings used to cut surfaces to be marked. These areas are filled with narrow, parallel lines with the same distance, at an angle of 45 ° to the main axis of symmetry of the component shown. (The oblique lines should symbolize a saw cut.) If there are several parts within a sectional view , the hatching is also used to visually delimit the parts. The hatchings then differ in the direction of the lines (± 45 °) and their distance.

Furthermore, according to DIN 201, which was replaced by DIN ISO 128-50 in 2002, there are still a large number of material- specific hatching types . As a rule, only the basic hatching is used, but it can sometimes be helpful to draw attention to a special material . Thus, for example the use of seals made of rubber is often the cross-hatching for plastics commonly used. Parts with a small cross-sectional area (e.g. thin sheet metal) are usually completely blackened for the sake of simplicity.

The standard DIN 30601: 1971, which was withdrawn without replacement in 2002, described systematic, position-independent hatching for the additive primary colors red, green and blue as well as their simple mixed colors yellow, cyan and magenta. White and black are each represented as opaque background and foreground colors.

Hatching and hatching in cartography

Hatching is used in cartography to represent areas with certain geographic properties on thematic maps (for example geological properties, language areas, historical developments). The hatching for an area type is used analogously to the technical drawing.

In the past, hatching was often used to represent the relief to represent the terrain in three dimensions. The hatches run z. B. in the fall line . Today, however, because of the more precise interpretability, contour lines and / or hillshades are used in maps .

Hatching in the fine arts

Different hatchings on an engraving by the master ES from 1466

In the artistic drawing and illustration of the technique of hatching is used by closely set lines of gray scale values , color tones and shades represent. In addition to simple parallel hatching, the technique of cross hatching is often used here: A second layer is drawn over a first layer of parallel lines in such a way that the lines cross at an angle. This allows hatching to be made darker at a later date and light-dark gradients to be displayed.

One of the first to use cross-hatching in copperplate engraving was the copper engraver Master ES , who lived around 1450

In order to clearly identify the coloring ( tinging ) of a coat of arms in black and white printing, the metals and colors are shown as follows:

The hatching ruler is used to produce even hatching , which mainly consists of a parallel ruler that is shifted by a certain but previously adjustable amount after each line by pressing the finger on a button, so that the lines that you can then use the Drawing pen pulls, getting exactly the same distance from each other.