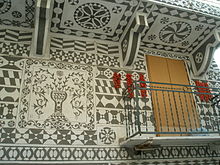 Sgraffito on a house in Pyrgi on the Greek island of Chios .

Alley in Pyrgi on the island of Chios. The place belongs to the Mastichochoria ("Mastixdörfern").

Detail of an arch in Pyrgi.

The term sgraffito (plural: sgraffiti ) is derived from the Italian verb sgraffiare or graffiare , German to scratch . It is a decoration technique for processing wall surfaces. After applying different colored plaster layers , parts of the upper plaster layer are scraped off and parts of the plaster layer below are exposed, so that an image is created through the color contrast. The technique was used particularly in Italy and Bohemia in the 16th century, but is still used by plasterers to this day. Sgraffito is therefore counted as a stucco technique . Similarly, certain "scratching techniques" are also referred to as sgraffito in other types of paint application (e.g. in watercolor painting ).

The sgraffito technique played a major role during the Renaissance in Italy for decades . In the 16th century, it was brought to Germany and Austria by the Renaissance master builders and was enthusiastically received by the craftspeople. The plastering technique was also used in Thuringia , Saxony as well as in Vierlanden , Austria and Transylvania . Above all, however, it is widespread in Bavaria , e.g. B. in the courtyard of the city ​​palace in Neuburg an der Donau . The technology was also used at St. Gallus Church in Neugalmsbüll ( Schleswig-Holstein ). In the canton of Graubünden , especially in the Engadine and the southern valleys, the sgraffito is a very common element in both historical and newer buildings and is considered part of the building culture.

Domestic motives are predominant. In addition, sgraffiti are used to design house facades for advertising purposes. In combination with ornamental jewelry, this design technique meant an alternative to the usual wall painting .

The manual process is simple, but time-sensitive. The prerequisites are the same as for fresco painting : a coarse, thinly liquid sprayed grout is thrown on a not too thick leveling layer of sump lime and sharp sand 1: 3 and only leveled off with a straightedge . A layer of mortar with the same or only slightly more lime-rich mixing ratio is applied over this, not thicker than 0.5 cm, which is colored with a lightfast and lime- fast pigment .

This layer is followed by another, which usually leaves the natural mortar color, which is only different due to the color of the sand. Instead, a simple whitewash can be used, which is applied with a wide brush in two to three layers and, if necessary, felted off or peeled off cleanly with a smoothing disc . The plasterer scratches, cuts or scratches lines and surfaces in the fresh, soft plaster so that the colored layer is just visible. Different shaped loops and forged scrapers are used for this. The problem for the craftsman is that the work has to be finished before the upper layers of plaster are set , which is why the size of the area worked on in one go is limited.

The technique is difficult with multi-colored sgraffiti because the structure of the image has to be reversed: First the details are created, the outlines only become visible at the end. Therefore, extensive advance planning is required for creation. The technology is popular because of its long shelf life, even under adverse weather conditions .

Recently there has been an unmistakably increased interest in this old technique, since it can be used very well as an artistic means of expression in its various forms. At the same time, old sgraffiti are endangered by the subsequent thermal insulation of buildings, as they are often covered by the insulation and subsequent new plastering or cladding.

A technique similar to sgraffito is the Hessian scratch plaster , which is widespread in Hessen and the surrounding area , in which a layer of plaster is also scratched, but to which there are some differences.