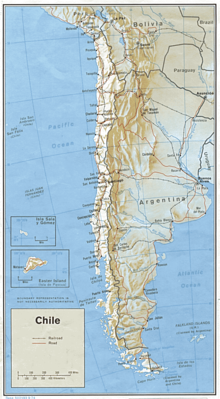 A shading is a surface tinting with which a spatial impression of the relative height differences of the terrain is created in cartography . The shades are usually created by lighting with an imaginary light source.

Depending on the position of the light source, a distinction is made between slope, oblique and combination hill shading.

In the case of hill shading (including incident light shading, shading with vertical lighting), the light comes vertically from above. Heavily sloping slopes are then darker than flat areas. The impression of brightness is comparable to that of hatching .

With oblique light shading , the imaginary light source is usually in the northwest (as preferred by right-handers). An elevation appears light on the north-west slope and dark on the south-east slope. Layers are uniformly colored with medium brightness (layer tone). The differences are shown exaggerated for reinforcement . In the case of hillshading, no shadow casting ( drop shadow ) is usually simulated. It is only expressed how much the surface is facing the light source. In order to highlight terrain structures that extend in a north-west-south-east direction, the position of the light source within a map can be varied with manual shading.

The combination hill shading combines slope shading and oblique shading. Here slopes facing the light are shown in light shadows and slopes facing away from the light are shown in strong shadows. Horizontal planes remain white. The combination hillshade is clearer than the slope hillshade and avoids the map-burdening layer tone of the oblique light shading. According to Mokronowski , only the shading with combined lighting provides a vivid and unadulterated image. 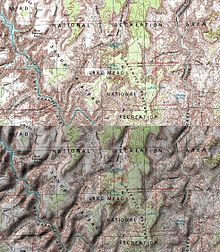 Shading can be created manually, photomechanically or digitally.