Level line is a redirect to this article. For the general concept see isoline . 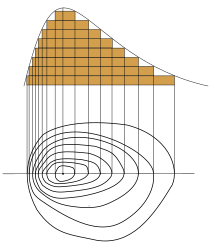 Contour lines , also Iso bathen (from ísos and ancient Greek βαθύς bathýs "deep") are contour lines in waters . They reproduce the relief of the sea or lake bed.

If the accuracy requirements are low, heights are also highlighted by coloring them in regional colors .

The main contour lines, which are usually shown thicker and / or labeled with often round height values ​​(e.g. at 300 meters), are called counting lines.

A topographic map with contour lines

Contour lines - but also contour lines on glaciers - are often shown on maps with a blue line color.

Contour lines should be labeled at round contour line values. Additional contour lines can also be labeled as required. In the lowlands , the labels are also useful on auxiliary contour lines. The foot of the contour number is mostly oriented towards the valley , especially in German-speaking countries .

Is not noticeable in the solitary, small contours, whether this a hill or a valley mark, the downward direction is indicated by an arrow in the sink or through small, vertically mounted on the contour lines case strokes marked.

On very steep terrain, the contour lines may be too close together. Therefore, some contour lines are often left out there or a rock signature is used instead in rocky terrain .

Between individual points that represent the terrain, those points are constructed by interpolation that are at the desired heights. Then the points created in this way, which are at the same height, are connected with each other by curves. The prerequisite is that the starting points are known in terms of location and altitude.

For the photogrammetric creation of contour lines, it is necessary that a " stereo image pair " of the terrain is available (i.e. there are two images on which the terrain is shown with different viewing directions). A “stereo model” can be created from this, which can be viewed three-dimensionally in the evaluation device or on the computer. In this model, a pointer is placed on the terrain at the desired height so that it lies in the terrain surface. This mark is then used to drive along the site and the distance covered is recorded. This represents the desired contour line.

A digital terrain model is created from a large number of individual points that represent the terrain . This can be done either by means of a triangulated irregular network or by approximating a rectangular grid . This elevation model is intersected with a horizontal plane at the desired height; the result is the contour line.

In addition to their typical use in topographical maps , also as an aid for hikers in hiking maps , for example , the contour lines are of particular importance in the context of the delimitation of surface water catchment areas and thus the watersheds as well as geological mapping - especially the banking process.

Contour lines can also be used to represent height differences, in particular for a change in height as a function of time. Thus, for example, time-dependent deformations ( deformations ) in the tunnel - or underground -Bau or dams are presented graphically.

Contour lines in the two-panel projection

In a two-panel projection ( descriptive geometry ) is referred to a layout plane parallel straight line as a height line .

The groundwater contour lines serve to map the groundwater level . In nature, this can be seen in aerial photos through the vegetation (e.g. alder and rushes compared to pine forest) and in rural cultivated areas on the drainage ditches. Groundwater elevation maps are made to defuse aerial bombs.