In numerical mathematics , the term interpolation (from Latin inter = between and polire = smooth, grind) describes a class of problems and procedures. At given discrete data (. E.g., measurement values ) to a continuous function (the so-called INTERPOL Ante or interpolant ) are found, which maps this data. The function is then said to interpolate the data.

Points to be interpolated

Sometimes only individual points of a function are known, but no analytical description of the function through which it could be evaluated at any point. One example is points as a result of a physical measurement . If the points could be connected by a (possibly smooth) curve, it would be possible to estimate the unknown function at the points in between. In other cases, a function that is difficult to handle should be approximately represented by a simpler one. An interpolation function can meet this requirement for simplicity. This task is known as the interpolation problem . There are several solutions to the problem; the user must first select suitable approach functions. Depending on the approach function, we get a different interpolant.

Other approximation methods such as the adjustment calculation do not require that the measured data be reproduced exactly. This is how these methods differ from interpolation. The related problem of extrapolation estimates values ​​that are beyond the definition of the data.

Given pairs of real or complex numbers . Analogous to the calculation with functions, those are referred to as support points , those as support values and the pairs as support points . One now selects an approach function that depends both on and on other parameters . The interpolation problem is the task to be chosen in such a way that .

One speaks of a linear interpolation problem if only linearly from the dependent, d. H.

Special cases for , and are called linear , quadratic and cubic interpolation . In two dimensions one speaks accordingly of bilinear , biquadratic and bicubic .

One of the most important nonlinear interpolation problems is

The linear interpolation established by Isaac Newton is the simplest and is probably the most widely used in practice. Here two given data points ( ) and ( ) are connected by a line. The following applies:

This corresponds to a convex combination of the end points and . 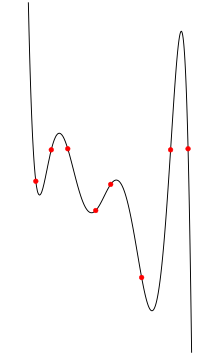 For data points that are different in pairs, there is exactly one interpolation polynomial -th degree that corresponds to the specified support values ​​at the specified support points. The determination of the coefficients requires the solution of a linear system of equations . The existence of such an interpolation polynomial can be seen e.g. B. using the formula of Lagrange

The uniqueness follows from the known fact that a polynomial -th degree has at most zeros.

For further procedures for polynomial interpolation see there.

If, in addition to the interpolation points , the - derivatives are to be interpolated, one speaks of a Hermite interpolation problem . The solution to this problem can also be given in a closed form, analogous to the Lagrange method.

corresponds to a Fourier expansion of the unknown interpolant. The Fourier coefficients and calculate each other

It is assumed that the support points are equidistantly distributed in the interval and are periodic outside of this interval. The coefficients can be calculated efficiently using the fast Fourier transform .

If you suspect or know that the data is based on a logarithmic function , this method is recommended.

In the logarithmic interpolation two known data points , and by a logarithmic curve connected. The following applies:

Or to put it another way:

A very versatile and universal interpolation method is the Gaussian process regression or the Kriging method. Both smooth and periodic interpolations or smoothing can be carried out in any dimensions. With the help of a so-called covariance function, the special properties of the data can be described in order to carry out the optimal interpolation for the problem.

Properties of the interpolation method:

Let it be a real or complex continuously differentiable function with a set of zeros , whereby all zeros must be simple. The index set can be a finite set, such as B. , or a countable set, such as or . The interpolation kernels are thus given as

and continued continuously with the value 1 at the point . The auxiliary function is defined outside the diagonal as

and steadily continued to grow .

The following applies to the zeros , whereby the Kronecker delta was used.

If values ​​are now given for each , an interpolation function is defined by

In the case of a countable set of zeros, the convergence condition must be

This plays a central role in the Nyquist-Shannon sampling theorem . The convergence condition is 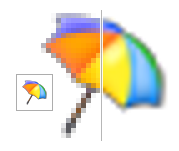 Interpolation when scaling an image

In many applications of interpolation methods it is claimed that new information is gained from existing data by interpolation . But this is wrong. Only the course of a continuous function between known sampling points can be estimated by interpolation . This estimate is mostly based on the assumption that the course is somewhat “smooth”, which in most cases leads to plausible results. The assumption does not necessarily have to be correct. Higher frequency components that were lost when a signal was digitized due to the sampling theorem cannot be reconstructed again by subsequent interpolation.

A well-known application of interpolation is digital signal processing . When converting a signal from a low sample rate to a high one (see sample rate conversion ), the sample values ​​of the output signal are interpolated from those of the input signal . A special case is the scaling of images in computer graphics .