This article deals with dams made of earth or rock; for other types of barrier structures see under dam . 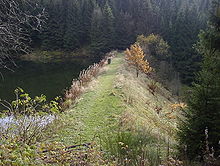 A dam or embankment dam is the barrier structure of a dam or a dam , which essentially consists of a bed of earth or rock. In contrast to a dike , which runs parallel to a river or a coastline and can be very long, a dam usually blocks a cross-section of a valley.

Dams can also be created naturally - through landslides; this is how the Pragser Wildsee , for example , was created. Even beavers create dams by cutting down trees and pull branches in a stream.

A dam consists of an embankment of stone gravel , gravel , sand , earth, etc. A distinction is therefore made between earth embankments and stone embankments.

The main part of a dam is the supporting body . It is usually sealed with a sealing layer inside or on the water side and often consists of zones of different permeability. The sealing layer can be a core seal made of loam , clay , foil or asphalt . A thin clay concrete wall in the middle of the dam is also possible . A so-called apron seal is a sloping layer of loam or clay on the water side. An external seal made of concrete , asphalt or plastic film is also possible. Because of the better stability, non-cohesive material is used for the support body . To avoid high transport costs, it is usually extracted in the immediate vicinity, for example in quarries or gravel pits .

However, a dam can also be homogeneous , i.e. H. consist entirely of one and the same material, but with such constructions there are often problems with stability in the event of permanent damming.

A dam has a trapezoidal cross-section and an embankment on both sides with a certain slope. However, different sections with different slopes are also quite common. Such sections are often divided by horizontal pieces ( berms ). In contrast to a dam, the contact area is relatively large, so the subsoil does not have to absorb such high loads. Therefore, no rock underground is required. A dam is suitable where wide valleys with low heights are to be blocked off. Dam walls are more suitable in narrow mountain valleys.

To prove the stability of a dam, one has to calculate, among other things, the safety against breaking the slope .

The Sadd-el-Kafara in the Wadi el Garawi near Cairo, Egypt (according to various sources, built between 2950 and 2500 BC) is considered to be one of the oldest still partially preserved dams .

The remains of dams that were part of the water supply for the city of Jawa in Jordan, the archaeologists date to 3,000 BC. From 1,000 BC. In many parts of the world countless large and small dams and dams were built . Remains of the buildings were found in the Mediterranean area, among other places. In Europe, the Romans were famous for their hydraulic engineering projects ( list of Roman dams ).

In Germany, the dams of the Upper Harz water shelf are considered to be the oldest dams still in operation. They emerged from the 15th century.