This article deals with the dry river course. For other meanings, see Wadi (disambiguation) . 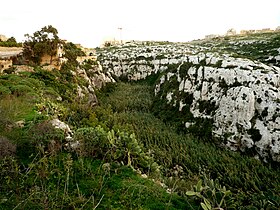 A wadi is a valley or river that often only temporarily carries water after heavy or prolonged rainfall. Surprising flash floods can come from distant thunderstorms that fall in the correspondingly large catchment area of the wadi. Staying in wadis with steep banks, but also in very wide wadis, can be life-threatening in such cases.

The word wadi comes from the Arabic (الوادي, DMG al-wādī , indeterminateواد / wādin ), in the Maghreb they are mostly called oued . In Andalusia they are called Ramblas (from the Arabicرملة ramla = "sand pit") called. In Namibia and neighboring countries, such rivers are called rivier .

Wadis is the name of arid valleys in the desert regions of North Africa , the Middle East and partly in Spain and Cyprus . Even in the desert areas in Australia, where dry waters are called Billabong , and in southern Africa (e.g. in Namibia ) as well as in North and South America, there have been rivers that have dried up for decades; one of the most famous examples is the Río Supe in Peru .

Wadis can be impassable rocky valleys just a few meters wide, as well as shallow river beds that are kilometers wide. They can have permanent water as well as arid areas that are only flooded over a large area during extremely rare storms. Another characteristic is that wadis often appear dry but are not. The water flows in the porous sedimentary or karst rock underground and comes to the surface in different places depending on the amount of water carried. Trees, bushes and palm trees are indicators of such underground rivers. Continuously above-ground rivers, such as in Europe, Asia and North America, only arise when there are regularly recurring large amounts of precipitation.