The Arabic alphabet ( Arabic الأبجدية العربية, DMG al-abǧadiyya al-ʿarabiyya ) is u. a. the alphabet of the Arabic language and consists of 28 letters. To form words, with six exceptions, all letters are connected from right to left according to the direction of the Arabic script . 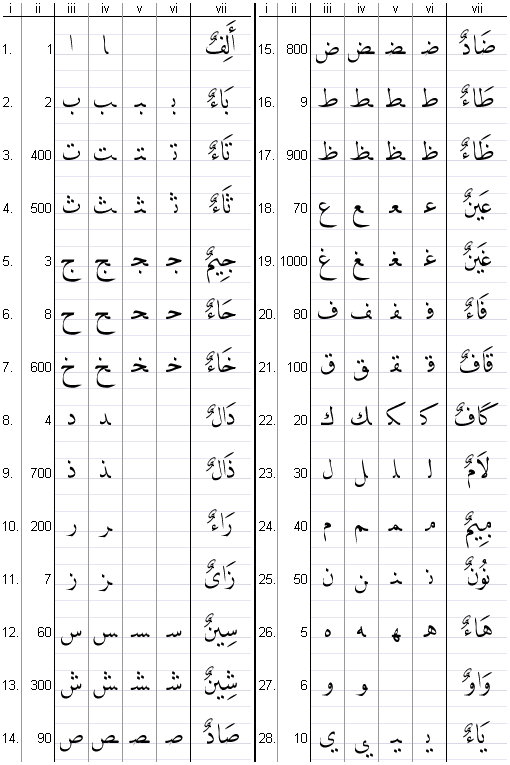 Originally, Alif , Bā ' , Jīm , Dāl (now the letters number 1, 2, 5 and 8) were the first four letters. The word Abdschad for “alphabet” refers to these four letters in the classical order, so it corresponds to the designation “ABC” for the Latin alphabet . The old order can still be read from the numerical value of the letters (see table on the right). Before the introduction of the Indian numerals, the letters were used to write down numbers, sometimes even today, see Abdschad number system . This old order of the alphabet was later replaced by the one that is valid today, in which characters with a similar shape are combined.

Like all Semitic scripts, Arabic is a consonant script . From the Arabic vowels only the long a, i and u are represented by their own letters:

Waw and Ya are also referred to as semi-vowels , as they are pronounced in the syllable sound like the English w (و) or the German j (ي).

Many words begin with an alif ا. This initial alif has no sound value of its own, but is only the carrier for the Hamza . A subsequent short initial vowel is usually not reproduced, and if it is, then it is reproduced with the corresponding auxiliary sign. If, as an exception, the alif at the beginning of the word actually has its own phonetic value as a long a, it is marked with the auxiliary sign Madda .

The connection alif is different: At the beginning of the article ال( al- ), the verb stems VII to X and some words such asابن( ibn = son) andاسم( ism = name) the alif is mute; it receives a Wasla sign (a ṣād ص without a final arc). At the beginning of a sentence (or after a “pause”) the Hamza is spoken (a voice paragraph is initially spoken, as in German). In the non-vocalized spelling, the Wasla is not written, but the Alif is without additional characters:ا

In the end, the Alif maqsura ("short Alif") can also be used for the long aىstand. Vowels in foreign proper names are circumscribed using long vowels, depending on pronunciation and accentuation, whereby o becomes waw and e becomes ya, or not at all.

Short vowels are not reproduced in the script. They are only marked with auxiliary signs in very specific cases: in the Koran always to guarantee the unadulterated original form, sometimes in poems and in textbooks for school beginners. These auxiliary symbols are not letters, but only reading aids and therefore do not belong to the alphabet.

If they are notated, Fatha, Kasra and Damma appear in duplicate to identify the nunation at the end of indefinite nouns. These vowel characters can be carried by any letter. They are placed either above (Fatha, Damma) or below (Kasra) the relevant letter, which is always implemented after the letter in pronunciation.

The doubling (reinforcement) of a letter is indicated in Arabic with a tashdīd (تشديدalso: schadda شدة) is displayed above the letter (1). If kasra is added as a vowel sign for "i", it is usually not below the letter, but above it, but below the shadda .

Lack of a vowel

If a consonant does not have a vowel, this is indicated by the characters (2a) and (2b). Their names are internally sukūn (سكون, Rest) and in the end dschazma (جزمة, Section). The origin of the jīm of the jazma can still be seen rudimentary in the form (2b).

If the previous word ends in a vowel, the “a” of the article falls out as a- . This can be indicated by the sign (9) ( wasla وصلة) are displayed above the alif .

With the Hamza (همزة) the Arabic alphabet has a character for an additional consonant, which denotes an voiceless glottal plosive on the inside, can be omitted in careless pronunciation in the final and ensures that the poetic syllable rules are adhered to. Hamza is usually written with a "carrier" which can be Alif , Waw or Ya . This means that two identical letters can meet (e.g. in the word ru'ūs رؤوس); in this case, letters with Hamza are also without a carrierرءوس or with defective long vowel رؤسto be found. The shape of the Hamza (ء) is derived from ʿain .

In Arabic, as in Europe, the Indian number is used. Since the Indian numerals came to Europe via the Arab world, they are called "Arabic numerals" in German. The differences in shape emerged later in Europe. There are three different variants used in the different countries: the "European", the "Arabic" and the "Persian" digits.

Numbers (both European and Arabic) are always written from left to right, unlike words. The Arabs adopted this Indian spelling for the numbers.

The following numerals are mostly used in Arabic:

Persian variants of the digits

The Persian variants of the Arabic numerals are used in Iran , Pakistan , Afghanistan, and India .

Some special characters are used for foreign words in Arabic:

پ, چ, گ and ژrepresent phonemes that are not used in Arabic itself, but are used in other languages ​​written with the Arabic alphabet, e.g. B. in Iran , Afghanistan , Pakistan and India for languages ​​such as Persian or Dari , Urdu , Pashto , Kurdish and Turkish (before the introduction of the Latin script). In Arabic itself, the consonants mentioned are integrated into its own phoneme system as follows:

The list of Arabic-based alphabets provides an overview of foreign-language special characters .

Special forms on the Internet