This article covers the history, distribution, and ornamentation of Arabic script; for their basics, see the Arabic alphabet .

The Arabic script is one of the most widespread scripts in the world today and, in the narrower sense, looks back on a history of around one and a half millennia, although its origin, like that of almost all alphabetical scripts , is older. It is written from right to left .

Two forms of the name Mohammed , joined as a ligature at the top, joined at the base line at the bottom, as is common in simpler prints
→ Main article : History of the Arabic script

The Arabic script has its origin in the Byblos script and the Phoenician script . The shape of the letters and the basis for further writing development were laid in the Aramaic script .

The development then went via the Nabataean script to a written form that is now mostly referred to as the Kufic script , but can be defined more broadly. This written form is the beginning of today's Arabic script. The tradition of the South Arabian inscriptions was lost with the Arab expansion.

During its development, dots had to be added to distinguish consonants spelled in the same way, and 18 became 28 (with Hamza 29) characters. In addition, the order of the Arabic alphabet was rearranged. This gradual transformation could be recognized by a variant, the Maghreb script , which was in use in the west of the Islamic area from 800 to 900 AD and was developed by a scholar. This was much closer to the sequence of the old Semitic than all later forms of Arabic script. Strictly speaking, there are also different versions of the Maghreb script; so one differentiates between a Tunisian, Algerian, Facian, Andalusian and Sudanese type.

With the introduction of letterpress printing and the typewriter in the 19th century, the shape of some letters was changed, which in manuscripts had until then meant that the following letters in the same word had to be placed a little lower, because at that time this problem could hardly be solved with printing technology .

Some forms of the Arabic script

With the ban on images in Islam , ornamentation soon became of paramount importance, which also included writing in this area. Because more and more emphasis was placed on the artistic training of writing, a sophisticated Arabic calligraphy developed , which led to the development of numerous quite different styles. Some of these styles later went out of fashion, but some of them have survived to this day.

The Arabic script knows numerous writing forms (Arabic 'chatt') and types. All Arabic scripts, including the typefaces , are italics , in which most of the letters of a word are connected. In contrast to the Latin script, there are no capital letters and no capitals . There are two basic shapes: a square and a round. The angular one is called Kufi script ( Kufi ) after the Iraqi city ​​of al-Kûfa and is often used for inscriptions in stone and large-format Koran texts. The round script used most frequently in the entire Islamic world - especially in print - is the Neshi script , of which there are numerous regional and calligraphic variants: In Persia the elegant Nasta'lîq script (mostly Ta'lîq script used by the Turks ) Script , while the Persians for their part understand this name to be a chancellery script that emerged from the old Tawqi style and is rarely used), especially popular for lithographs and prints of poetic literature. In contrast, the Neshi script is mainly used in religious, legal and similar texts. In correspondence and for notes, however, the Persians mostly use the Schekaste script. This font is difficult to read for the inexperienced due to the frequent connection of normally unconnected characters. The modern Arabic manuscript in Mashrek is based on the Ruqʿa . 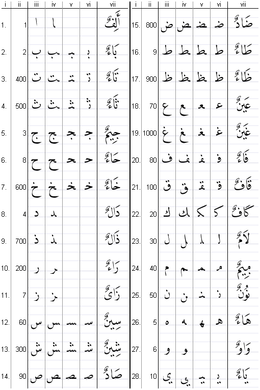 The Arabic script is the most popular of the Semitic scripts. With Islam and the Koran it was carried from people to people. It partly displaced the native script, e.g. B. in Persia, in some cases it became the first script of the people concerned, as with some African peoples. The Arabic script is not only used for rendering the Arabic language, but also for Persian , Kurdish (in Iraq, Iran and Syria), previously for Turkish and Tatar (both now use a modified Latin alphabet), Malay (the script becomes Jawi called), Indonesian , Pashto , Urdu , Uyghur , Somali (see: Wadaad script ), Swahili and Hausa , and more rarely for some northern Berber languages . Such uses of the Arabic alphabet for other languages ​​are known as the Ajami script .

However, the Arabic script was not always suitable for reproducing the phonemes of these languages ​​in full, as the phonemes of these languages ​​sometimes differ very clearly from the Arabic language. For this reason , new characters were invented for the extended alphabets for special sounds in a language that could not be represented with the characters of the Arabic alphabet . This was usually done by adding diacritical dots to existing letters that denoted a similar phoneme to distinguish them . For example, the Persian p , which does not appear in Arabic, is derived from the Arabic letter Ba (باء, corresponds to the Latin b ) formed by adding not just one but three points arranged in a triangle below the baseline ( Persian په, see also Pe ). The g is also used as a modification of the Kaf (كاف, k ) shown with two upper lines instead of just one ( Persian گاف, see also Gaf ).

Meaning of the Latin script

The great triumph of Arabic writing as a result of Islamic expansion , which began in the 7th century with the conquests of the Arabs, has come to an end in the present; the range has even narrowed. Languages ​​such as Malay , Swahili, and in part also the local language in Central Africa, which used to be written with Arabic characters, are now almost exclusively written with Latin letters.

Also with the Ottoman Turks the Arabic was replaced by the Latin script of Ataturk . At the “Turkological Congress” in Baku ( Azerbaijan ) in 1926, the decision was made to replace the Arabic alphabet with the Latin one in all schools and in the literature of the Turks and Tatars . This was only partially realized in 1928, because the Central Asian Turkic languages were written in Cyrillic during the Soviet era . Today, however, some of these have also changed over to the Latin alphabet (with some new characters) based on the model of the Turkish-Turkish alphabet. Only Uighur (in western China) is still officially written with Arabic characters, although there, too, the trend has emerged (especially on the Internet) to use Latin letters.

In Iran, attempts made in the 1930s to replace the Arabic with the Latin script have been unsuccessful. Often the abolition of the Arabic script was an avowed instrument to withdraw the relevant population groups from the cultural influence of Islam. In Turkey, the Latin alphabet was implemented in the course of secularization based on the European model, and in the former Soviet republics of Central Asia, the Cyrillic alphabet was partially introduced to strengthen cultural ties with Soviet Russia. Today u. a. result that z. B. the Persian dialects in Iran and Afghanistan are written with the Arabic alphabet, but in Tajikistan the Cyrillic is used for this. The process was similar in the former European colonies, where the colonial rulers introduced the Latin alphabet. These developments were not reversed even after the colonial era. However, there are Islamically motivated movements that are calling for the reintroduction of Arabic script.