Distribution of the Hausa in Niger (red) 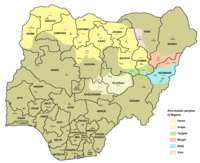 Distribution of the Hausa in Nigeria (yellow)

It is an Afro-Asian language and the largest of the Western Chadian languages, with around 30 to 50 million speakers .

In Nigeria and Niger , Hausa is taught in primary schools alongside the official language, i.e. English in Nigeria and French in Niger. The German wave radiates through the transmitters in Issoudun in France of a program in Hausa. The BBC maintains its own news page on Hausa at the web link below.

Hausa is spoken in the following countries:

Hausa is a tonal language and is now mainly written in the Latin alphabet, supplemented by four phonetic symbols, but also occurs in Arabic characters .

Typical features that characterize Hausa as an Afro-Asian language include: a. the prefixing tenses of the verb, the gender distinction between nouns and pronouns in the singular and the pronouns.

The following table gives an overview of the consonant system. If the normal spelling differs from the corresponding IPA symbol, it is given in brackets after the IPA symbol.

In terms of vowels, the Hausa knows / a /, / e /, / i /, / o / and / u /, which can be spoken either short or long, as well as the diphthongs / ai / and / au /. In addition, a distinction is made between three tones: high, low and falling tone, the latter is a combination of high and low tone. In the scientific transcription only the low tone and the falling tone are noted. A few exceptions mark the high and falling tone. The high tone is marked with the acute tone: (e.g. á), the low tone with the grave accent (e.g. à) and the falling tone with the circumflex (e.g. â). Outside of scientific works, however, the tones are not specially marked. Each vowel anlautende syllable by glottic closure '(/ / [⁠ ʔ ⁠] initiated): ' aikìì "work".

Nouns and adjectives distinguish two genera , i. H. grammatical genders, namely masculine and feminine as well as the numbers singular and plural . There is no case distinction . Adjectives congruent in number and gender with the reference word and usually appear in front of it. Feminine nouns usually end with -a , while most nouns ending in a different vowel or consonant are masculine. The plural formation of nouns and adjectives takes place through different endings and partial and full reduplications. This system is shown in the following table using the nouns teebùr "table" (masculine) and ƙoofàà "door" (feminine) and the adjective ƙaatòò "large":

Hausa has a mixed system of aspects and actual tenses . The verb itself is only conjugated in the imperative, which can only be formed for the 2nd person plural. All other forms of the TAM system ( tense, aspect, mood or tense, aspect, mode) are formed by a combination of the tempus and person-specific so-called Person-Aspect Complex and the verb. The progressive is an exception here, as the verbal noun is used instead of the infinitive of the verb.

The following table lists forms of the verb tàfi "to go" from the various tenses and aspects:

The tense system in Hausa is based on a system of relative time references.