Tinging is the coloring (tincture) of the coat of arms . The heraldry's inherent demand for rich contrasts in the heraldic symbols led to the restriction of the coat of arms to a few colors as well as the fur on the helmet covers and crest decorations .

The heraldic tinctures are the colors used for coloring . A distinction is made between the actual colors , metals and heraldic fur .

“Heraldic colors (tinctures), coat of arms or herald colors, in the old heraldry only six in number u. Black, red, blue, green (and possibly purple for tinging the gems), as well as gold and silver (the 'metals'), for which yellow and white are often used. The black is the ivory (or Russian Black), the red cinnabar (in earlier times also minium ), the blue light cobalt (od. Mountain) Blue, the Green, the so-called. Emerald green . For gold, you use real gold leaf, for silver usually platina, since base metals will soon oxidize. "

- Article on heraldic colors in Pierer's Konversations-Lexikon from 1890

When a coat of arms collection is published such as the content of a coat of arms roll , the named nominal colors are printed with the same color for all coats of arms. Since printing with several colors was originally very complex, a uniform system of hatching with dots and lines prevailed so that the pictorial publication of coats of arms can always be read correctly even in black and white printing.

In the tables below, the "Metal" or "Color" field shows the color and the corresponding hatching next to it.

Gold and silver are referred to as metals in heraldry . Gold can be replaced with yellow , silver with white . In heraldry, gold and yellow are to be equated, as well as silver and white. In heraldry, yellow and white therefore appear under the metals and not under the colors described below.

Technical difficulties of reproduction gave rise to heraldic errors. Silver becomes black through oxidation and gold, which had to be underlaid with red lead, flakes off so that only the red basic color remains. So z. B. the black (actually silver) ram's head of the von Rechenberg - Haugwitz family .

Among the colors are, by definition, red, blue, green and black. All colors are only reproduced in a uniform, strong basic tone. Variations such as light blue, royal blue , deep blue are absolutely permissible for individual representations (for example above a portal ), but only the "blue" remains heraldically relevant.

Other colors are avoided and usually only appear for subordinate components of coats of arms. A different tincture for common figures is often emblazoned as "in natural colors" , with which the color tone is usually sufficiently determined, for example for fur (brown), skin (pink) or walls (gray). The reproduction of heraldic figures in natural colors contradicts the principles of heraldic representation and is therefore rarely used. B. in animals and humans. These natural colors are not subject to the rule of alternating metal and colors .

The natural colors should be converted into the closest heraldic color. A tree trunk would then not have to be colored brown, but red. In addition, it is permissible to color all objects in all heraldic colors. So a lion can be green or blue.

Uniform hatching has also established itself for the different coloring.

Outside of Central and Eastern Europe there are also different colors that appear in several coats of arms and are named. No uniform hatching has prevailed for the colors listed below.

Heraldic fur, also known as a small gap, is the pattern used to represent furs. It goes back to the preference for precious furs in the Middle Ages. There is evidence of the Franks' preference for marten and otter skins. Furs were also of great importance to the English, which is still reflected in the coats of arms today, because the furs not only complemented the clothing, but were also attached to the shields . Ulrich von Liechtenstein (* around 1200; † 1275) had his shield covered with ermine. Later the fur on the shield or the coat of arms was only shown stylized.

The fur works can be used together with metals and colors, they are “neutral” towards them and completely equated.

Non-colored representation of coats of arms

Hatching is usually used to identify colors in black and white representations. This option was not yet known in the oldest coat of arms codes and instead used symbols or abbreviations with letters, e.g. G. for gold.

The first legend for hatching (Zangrius, 1600). Except for black (bottom right in the picture) it is still the usual hatching today.

Hatching is used to indicate the colors (tinctures) in the black and white representation of coats of arms . For the individual hatching, see the tables in the Tincture section , in each case the field on the far left. An example:

Jan Baptist Zangrius from Flanders († 1606 in Leuven ) is considered to be the inventor of today's heraldic hatching. The six hatchings on his map of the coat of arms of Brabant from 1600 (see picture on the right) already correspond to those that are common today, except for a single difference in black. A second early system of hatching for the purpose of color designation, developed by Jacob Francquart from Brussels and with several deviations from Zangrius, dates back to 1623. The system adopted by the heraldry of all European states, which is now still valid, is first found in 1634/1638 in the Roman Jesuit Silvester a Petra Sancta : black as a grid of horizontal and vertical lines, otherwise the hatching as with Zangrius.

Early systems of hatching (1600 to 1654). The comparison shows that there were initially significant deviations. For gold (far left), however, there is already broad agreement, for silver (second column) complete agreement. In the first three lines, the hatches for red, blue and green also match.

Instead of hatching, astronomical symbols were also used. The Englishman Speelmann used these symbols around 1600.

These are the usual color attributions of alchemical use, as they were common at this time, with the exception of Mercury (mercury), which usually represents luster - according to the early color theories, as such, not differentiated from colors.

The heraldic color rule defines how the tinctures can be used. It says: Metals must not border on metals, colors not on colors. This also means: every coat of arms must contain gold or silver. By juxtaposing metals and colors in a coat of arms, a strong contrast effect is achieved, which makes the coat of arms recognizable from a great distance. This was necessary in the Middle Ages in order to be able to identify the person opposite from a great distance.

A violation of the color rule can be found in many student coats of arms .

The juxtaposition of color and metal according to the color rule should ensure a good contrast . Four colors (red, blue, black and green) and two metals (gold and silver) allow a total of eight combinations of one color with one metal. However, the resulting contrast is not equally convincing in all combinations.

Whether a good contrast is created can also be seen from which color combinations are preferred on today's signs, with white and yellow instead of silver and gold. These combinations are easy to recognize:

Green and gold with a comparatively low contrast is by far the rarest combination, the most popular combination of red and silver appears almost 15 times more often. However, the statistics also show that the optimal contrast effect cannot be the only criterion for the choice of color and metal. Although black and white are known to offer the best contrast (almost all texts are printed in black on white), the analog combination of black and silver is only moderately popular with two-tone coats of arms, probably because it lacks color.

Necessary exceptions to the color rule 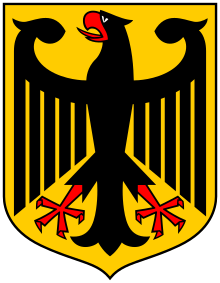 Federal coat of arms of Germany : The red reinforcement on the black federal eagle is not considered a rule violation

Complex coats of arms: With only two or three tincture variants (colors and metals, possibly fur), not all divisions and figures can be designed strictly according to the color rule. With the development and spread of the coats of arms, more and more complex motifs emerged, in which a softening of the rule of colors could not be avoided. The basic principle is that the more simply the coat of arms is designed, the more strictly the rule of colors must be adhered to (especially with heraldic images ).

Overlaying motifs: Basically, the large-scale juxtaposition of color on color or metal on metal is avoided. Overlays are allowed, however, and are not considered a breach of the color rule, as the overlaid motif is perceived as lying in front of or above the background. One example is the coat of arms of Senden (Westphalia) , in which a green linden tree is covered in silver by a red, four-lipped tournament collar .

Small details: Even with smaller details, such as the reinforcement of common figures, one tries, where possible, to comply with the color rule. A looser handling dictated by necessity is tolerated, e.g. B. the German federal eagle .

Coats of arms, the colors of which have changed significantly due to oxidation , fading or loss of a layer of paint, are referred to as “mystery coats of arms”. In particular, the technical difficulties in reproducing silver and gold have given rise to heraldic errors. Silver becomes slightly black through oxidation, or the usual blue underpainting of silver could emerge over time. The gold leaf, which originally had to be underlaid with red lead, often peeled off and then left only the red base color. Such color changes can result in an apparent violation of the color rule, as one metal (silver or gold) is replaced by a color (black, blue, red).