This article refers to the municipality of Cremlingen, for the town of the same name see Cremlingen (Cremlingen) .

Cremlingen is a municipality in the Wolfenbüttel district ( Lower Saxony ), east of Braunschweig . Cremlingen was the location of the medium-wave transmitter Braunschweig of the Deutschlandfunk , which was also occasionally referred to as the Königslutter transmitter .

The municipality lies in the transition between the North German Plain and the Central German mountainous region.

The approximately 60 square kilometers large community extends from the eastern edge of the regional center of Braunschweig to the northwestern Elm. The place has grown together from two communities, the village community with 65 and the manor community with seven houses. The ending ~ ingen indicates that the name originated around 500 years ago. However, the history of the settlement is much older, as evidenced by an urn grave field on the Ehlerberge southwest of the village. In 1302 Cremlingen was passed down as "Cremlinge", while it was documented as "Cremninge" in the 14th century.

The location on the old trade route that led from Cologne via Braunschweig to Magdeburg in the Middle Ages was advantageous for the development of the community . The main trade here was grain, which was also grown on the fields of Cremlingen. The lords of Veltheim and the Riddagshausen monastery , which received two tenth-free hooves and one word (yard) in 1308 , particularly benefited from the local grain industry . In addition, the land of the von Veltheim family was later added as a ducal fiefdom. The von Veltheim auf Destedt are still the owners of the manor in Cremlingen. Land had also been transferred as a fiefdom from the Halberstadt bishop, on whose diocesan territory Cremlingen lay.

Shortly after the beginning of the 20th century, the Central German Oil Drilling Association came across a thermal spring with water at 34 ° C at a depth of 410 meters. The healing power was discussed extensively in the press, and the dream of a medicinal bath came up. In the 1930s, the doctor Ernst Matheis from Cremlingen tried to organize the bathing business - plans that were thwarted by the Second World War. In 1973 the area was added to the (now disbanded) adjacent military training area . One tried in vain to seal the spring with sand: Even today, around 7600 liters gush unused into the landscape every hour. In the meantime, the nature conservation authority has declared the area a biotope worth protecting. There were massive cuts in the landscape with the construction of the “ Weddeler Loop ”, the A 39 motorway and the bypass road.

The ammonite in the coat of arms already indicates fossil-containing rocks in the area around Cremlingen. In the course of earthworks for a new motorway, a collector discovered a prehistoric skeleton from the Mesozoic Era in May 2005 , which turned out to be a well-preserved Ichthyosaurus ( Acamptonectes densus ).

The data come from the information provided by the Lower Saxony State Statistical Office. They refer to December 31st of each year. 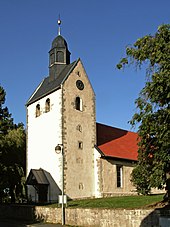 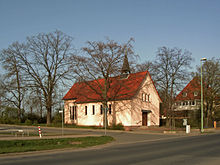 Church of St. Theresa of the Child Jesus

The Protestant parish church in Cremlingen (Im Dorfe 13) was administered by the Archdeacon of the Bannes Lucklum . A parish priest is documented in 1302 with Lubertus quon-dam plebanus . The tower with a gable roof and eight-sided lantern and the nave show traces of the late Romanesque, while the choir is Romanesque. Since the patronage of the church was no longer known, it was named St. Michael in 1963 . Today the parish of Cremlingen belongs to the provost of Königslutter.

The Catholic Church of St. Theresa of the Child of Jesus was located in Cremlingen from 1953 to 2014 . Today there is a Catholic church in the Weddel district.

The municipality council of the municipality of Cremlingen consists of 30 councilors. This is the specified number for a municipality with a population between 12,001 and 15,000. The 30 council members are elected for five years each by local elections. The current term of office began on November 1, 2016 and ends on October 31, 2021.

The full-time mayor Detlef Kaatz (SPD) is also entitled to vote in the council of the municipality.

Detlef Kaatz (SPD) is the full-time mayor of the municipality of Cremlingen. In the last mayoral election on May 25, 2014, he was elected with 50.5% of the vote. The turnout was 62.2%. Kaatz took up his post on November 1, 2014, replacing the previous incumbent Günter Eichenlaub (CDU), who was no longer a candidate.

Description of the coat of arms : The coat of arms of the municipality shows a blue Ammon's horn on a golden background in the divided heraldic shield, above a half, soaring golden lion with a red tongue and red claws on a blue background.

The lion comes from the coat of arms of the former district of Braunschweig , to which the village of Cremlingen and the other villages of today's municipality of Cremlingen belonged until 1974. The blue Ammonshorn refers to the fossil finds of ammonites from the limestone mountains Elm .

The flag of the municipality is blue and yellow.

More than 500 members of the community of Cremlingen take part in a CD project called “How does Cremlingen sound?”. In several villages of the municipality there are several choirs dedicated to modern music in addition to the traditional choirs.

Cremlingen is the seat of the telecommunications manufacturer Auerswald . In addition, Cremlingen is the headquarters and production site of the Weibler Confiserie Chocolaterie GmbH, which belongs to the Halloren chocolate factory . This operates a factory outlet there.

Near Cremlingen-Abbenrode the operational German Telekom AG since 1962 a large transmitter for medium wave that aired the program of the Germany radio. The transmitter was shut down on December 31, 2015 and demolished on January 29, 2018.

In the area of ​​the community there are the Schandelah and Weddel stations on the Braunschweig – Magdeburg railway line ; Weddel is also served by trains in the direction of Wolfsburg (" Weddeler Loop ").

The federal highway 1 runs through the municipality , and since the end of September 2006 Cremlingen has had a junction of the same name with the A 39 , which has been continuously accessible to the Wolfsburg motorway junction since the beginning of 2009.

Municipalities in the Wolfenbüttel district

Districts of the community of Cremlingen