The church in Klein Thought 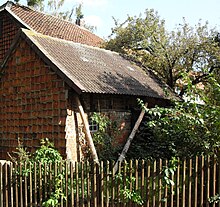 Denkte is a municipality in the Wolfenbüttel district in Lower Saxony .

Thought is directly adjacent to the city of Wolfenbüttel and the Asse ridge .

The community was first mentioned in a document in the 9th century. The village of Groß Denkte came to the Gandersheim monastery through a donation from Count Liudolf in 856 . The monastery then remained in the possession of the place until the secularization in 1803. From around 1539 to 1807 the local manor was the seat of the noble court of Neindorf. In the 19th and 20th centuries there was a significant economic upswing in the region due to potash mining in the Neindorf and Hedwigsburg shafts, which led to a strong increase in population. On March 1, 1974, the communities of Groß Denkte, Klein Denkte, Neindorf and Sottmar were combined to form the new community of Denkte.

Since January 1, 2015, Thought has been part of the Elm-Asse community , which has its administrative headquarters in the town of Schöppenstedt .

The municipal council, which was elected on September 11, 2016, is composed as follows:

Guido Bartschat has been honorary mayor of the community of Denkte since 2016.

The municipality of Thought, unlike its districts, does not have a coat of arms.

Municipalities in the Wolfenbüttel district

Districts of the municipality of Denkte