The term to color (Latin colorare , to dye, to paint ”) describes the coloring of monochrome pictorial representations. For example, drawings , illustrations , prints , graphics , photographs and films are suitable for coloring .

The origins of the technology go back to medieval book art. Back then, black-and-white illustrations in books (one-off production or entire editions) were laboriously colored by hand (see book illumination ). Later, woodcuts , engravings and other templates with color provided, first manually (hand-coloring), and later by machine by means of various printing processes. This is commonly known in the bookseller trade of altkoloriert or original colors when the coloration was produced at the time of production of the template, and colored new or Neukolorit at much later colouration. However, both terms are not established as technici terms in book or library science .

The technique of coloring film material emerged after the invention of black and white photography. Paper pictures ( positives ) or slides were colored completely or partially with colored glaze (protein glaze). The paint was diluted and applied in several layers. The invention of color film replaced coloration for documentary purposes. Coloring is still used today in art photography .

With the introduction of digital image processing , the production of colored photographs was simplified. Image editing programs such as Adobe Photoshop , Paint Shop Pro or GIMP support coloring using various techniques and functions. This allows selected, delimited parts of the image to be colored.

Historical film documents in black and white are also colored with the help of software in individual cases. However, there were previously hand-colored silent films . Films can also be re-colored on the computer to achieve more intense colors.

A black and white image is as a whole or in part by lavierendes colored paint on colors. (This technique can also be used on color photos if they are reduced to grayscale with an image processing program on the computer before they are colored .) Manual coloring requires a great deal of skill. The paint is applied thinly and, if necessary, in several layers with a brush, cotton swab and / or soft cloth. Dark image areas require more color, light gray values ​​less or no color. It would be wrong to believe that you have to paint in the lights when coloring (good picture example: see below ). 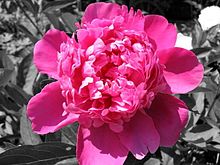 Partial bleaching of a photo

In particular, image processing programs enable not only the application of color to a black-and-white photograph, but also the decolorization of parts of a color photograph. With selected image areas, the colors can be washed out or converted to black and white. This technique is not coloring in the strict sense, but the result is comparable. The colored areas show the original colors, which is not or only approximately possible when coloring.

With this technique, black and white photos are colored brown or blue (monochrome). With programs for image processing child's play and possible in all color nuances; In laboratory photography, however, complex bath approaches and experiments are often required to achieve the desired result. The photo to be toned should usually have strong contrasts. The most common color tone is sepia (light brown tone), continuously mixable from yellowish brown to dark brown. Can be processed further with gold toner to a reddish tint. This technique is often used to artificially age an image. When toned, the highlights stay white. Dark shadows result in dark to black brown tones. Light gray values ​​result in light brown tones.

Coloring of black and white films

In the past, black and white films still had to be colored by hand, with each individual image being colored with great effort. In the 1990s, studios were increasingly working with computer routines from specially developed programs, which at least made work a lot easier. When coloring black and white films, almost all common methods (e.g. from Legend Films or Timebrush ) have to assign clear color tones to certain image areas (so-called regions ), which can sometimes be very time-consuming and computationally expensive.

Because most common computer algorithms cannot precisely delimit blurred or weakly contoured areas, they often have to be reworked by hand. The delineation of hair and face color can also be very problematic, which is why the studios depend on time-consuming manual corrections during the entire process, regardless of the software used, which can drive up costs extremely. Another significant problem is region tracking , i.e. the exact adaptation of the boundary lines between the color regions as a result of the image movements. Here too, improvements must usually be made from single image to single image.

The two essential steps are 1. the color design for the individual scenes, 2. the actual digital coloring.

At the Benin School of Engineering and Computer Science at the Hebrew University , a new process has been developed that makes semi-automatic coloring possible for the first time and is intended to reduce costs dramatically. A definite "desired color" is to be assigned to certain areas on a black-and-white initial image, on the basis of which the computer program works out a fixed color scheme depending on the changing gray tones (gray pixels), which during the computing process is applied to the following individual images and thus to a part of the film is transmitted. As soon as the color assignment no longer works correctly from a certain individual image (e.g. due to a change of scene), a new assignment of colors is required.

In the 1960s and 1970s, numerous films originally shot in color were removed from archives and destroyed. Of some of these films, only (color) copies were still available on 16 mm film, and of some only black and white television recordings on video tape.

In some cases this enables the reconstruction of the color images.

For individual films in the British science fiction series Doctor Who , the “Doctor Who Restoration Team” colored black and white films with the help of still existing color video recordings and thus restored them. For this purpose, the color information of the television recordings was combined with the brightness information of the black-and-white recording.

Reconstruction through manual or semi-automatic coloring

Reconstruction by manual or semi-automatic coloring is used when none of the other methods are available. Because of its high cost, it is particularly suitable when only short pieces need to be colored. The procedure is explained in more detail in the section on Coloring Black and White Films . One example is Dinner for One .

There is a possibility of color reconstruction of television films that were originally colored but only existed as black-and-white copies: there are characteristic patterns, so-called chroma dots, on the black-and-white images of film copies, which originate from the color carrier and which in some cases lead to Color reconstruction can be used. The first film in which this technique was used successfully was a 1969 episode of the BBC television series "Dad's Army". The idea of ​​developing such a method came from James Insell and was implemented in software in the "Color Recovery Working Group" he founded. Andrew Browne and Andrew Steer achieved the first results, the breakthrough came with a program by Richard Thomas Russell, who later left this group and runs a wiki on the subject.

For the reconstruction of the third episode of “Planet of the Daleks” of the British TV series Doctor Who , a combination of this method and classic coloring was used.

A color image was used as a starting point for the example. The patterns in the black and white image of the example were calculated by software. In the original process, they were photographed from the television.

The method is suitable for PAL . It cannot be used for NTSC recording. This is due, among other things, to the fact that each color line contains a series of synchronization signals at the beginning, which are not visible on the normal television picture and therefore have not been photographed. The phase position of the color signal is thus initially lost. The reconstruction makes use of the property that with PAL the red color difference signal of every second image line is 180 degrees out of phase with the previous one. Because of the specific properties of PAL, the colors can be reconstructed except for the absolute assignment to one of four color quadrants. Reconstruction is possible by selecting the “correct” image from one of four possible using known colors, for example using skin tones. The method works despite global geometric distortions, as these can be compensated for with PAL.

Reconstruction of the original films is made more difficult because the images on the films are distorted. In addition, the patterns were regarded as disturbances. In a number of the old films, electronic filters were used to prevent the formation of patterns. If the color samples have been removed by the filtering, the reconstruction is no longer possible.