Violet is a color stimulus and a spectral color that ranges from the short-wave end of visible light, the limit to the ultraviolet , to around 425 nm or 430 nm.

Light with this property can also be remitted as body color . In normal parlance, the color names violet and lilac are used to cover shades between red and blue, but violet is the “pure” short-wave color stimulus, while purple often describes a broken color in red-blue. The complementary color after subtractive color mixing is yellow , after additive color mixing it is green (where the exact mixture of the respective primary red and blue tone (secondary color ) is referred to as magenta ; violet is thus a tertiary color that is made up of magenta and blue and is complementary to yellow-green ).

Etymology of violet, lavender and magenta

Violet (with minor forms) already appears in German-language painting sources from the 15th to the 16th century as the name of a rather light, pale violet painter's color. In the 17th and 18th centuries violet (adj.) And violet (noun) established themselves as normal color names in German. It is based on French violet (noun) 'violets', also 'violet color , violet' and violet (adj.) ' Violet colored, violet blue', from Latin viola 'violet' (cf. also violaceus 'violet colored'). The most common shade of violets tends to be blue, which is also referred to by the color adjective 'violet blue'.

Also from the French later (2nd half of the 18th century) the sometimes strongly competing color name purple was borrowed. This initially appears as a fashionable textile color in German texts. The French word lilas (pronounced: 'lilá') (= 'lilac' or 'lilac-colored') is of oriental origin (like the plant itself) and comes from Arabic and Persian , probably through Spanish mediation. In addition to white and pink varieties, there is now a wide range of colors for lilacs. The flower colors are violet or lavender and range from dark and saturated to medium purple tones to delicate, pale varieties; blue-violet and red-violet colors emerged.

The color name magenta developed in the 20th century and goes back to the bloody battle of Magenta (1859), a northern Italian city. 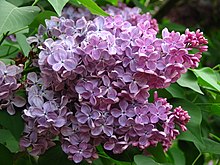 There are several words for the purple hues, which differ slightly in meaning.

Different color models ( color circles ) make varying use of these color names, the examples show some color names defined for the design of websites .

Despite the very different impression of the violet hues, the use of the words for this color range is inconsistent and sometimes still controversial. Empirical research has shown that dictionary definitions and official language patterns are not always in line with common usage, and that, for example, purple and purple are often used as synonyms in practice.

To use purple as a color word

In the past, purple things were often classified as blue or red depending on the prevailing color impression.

The word purple is in fibulae often used as the first color name, as the well-known characters are initially limited. This blue-red shade becomes familiar to children and consolidated as a written color concept .

There is a report by Lina Panitz about the officially protected Milka-Lila color brand of the Kraft Group's chocolate products , which has its own Pantone number

The spectral color violet corresponds to a wavelength of 400 to 430 nanometers , i.e. it is at the short-wave end of the visible spectrum. It cannot be displayed with television and computer monitors due to the lack of (sufficiently intense) phosphors . Spectral violet can be seen on a CD, in which a powerful light source is reflected when diffraction occurs on the surface.

The color of the little evergreen is also known as lavender blue and is close to indigo here . 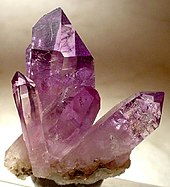 In the true sense of the word, violet is the name of the spectral color at the short-wave end, which adjoins the indigo and changes into the ultraviolet. Only in this sense is violet a monochromatic spectral color. Purple , on the other hand, is a mixed color and designation of the color valence of red and violet color stimulus. The most intense purple tones form the “ purple line ” of the CIE chromaticity diagram. Purple is the color that belongs to the “royal” dye from the purple snail.

Violet is the color name for the secondary color in the additive color mixing used when the light of the primary color blue with red coincide. Technically, it is better to use the term magenta for this.

The color violet occurs in nature, so the color tones of the violet and later of the lilac gave the name of the color. For a long time, however, it was not possible to produce a permanent dye, such as is required for dyeing textiles. In ancient times, very expensive dyes extracted from purple snails were used to color luxury items. In the Middle Ages and in the early modern period, purple dyeing of textiles was often achieved by dyeing them twice (with red and blue colorants, e.g. kermes and woad , later madder or koschenille and indigo ). It was only in 1856 that William Henry Perkin accidentally obtained the (ever) first artificially synthesized dye mauvein when he was conducting studies on coal tar. Two years later August Wilhelm von Hofmann succeeded in obtaining the dye fuchsin .

Violet in everyday life and culture

There are partly contradicting statements about the effect of violet. The hue is considered mysterious and mystical and is associated with faith , spirituality and service. Violet has a calming effect, but also stands for loneliness , melancholy , suffering, sadness and renunciation.

In color counseling it is recommended to express self-confidence and individuality and for all occasions where diplomacy is required. Violet with its shades of color is also considered full of imagination and creative , sensitive, intuitive and extraordinary. It is said to have an aphrodisiac effect.

After the production of the first fabrics with the newly discovered artificial dye between 1858 and 1869, the pale " mauve , or violet colored silk" was considered the fashionable color of the better people.

As an expression of love for women and independence (freedom), red-blue colors are mentioned for the first time by the ancient poet Sappho, who lives on the Greek island of Lesbos .

Famous women influenced the fashion world with clothes of this color. In the 19th century the color was rediscovered for the women's movement. Purple as a mixture between pink (female, previously red considered a male color) and light blue (male, previously blue considered a female color) is a symbol of equality between the sexes. The posters for the first International Women's Days were already painted in purple. The color became fashionable in the "golden 1920s," and by the 1970s it was almost a must for feminists to dress in purple. Many women's political projects were given a name that contained the word purple. The “purple dungarees” was literally and often ridiculed.

The Purple Day has been held since 2008 annually on 26 March. On this memorial day to educate people about epilepsy , the color is intended to remind of the loneliness of those affected.