The title of this article is ambiguous. Further meanings are listed under melancholy (disambiguation) . 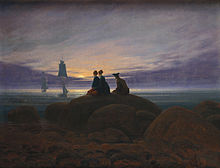 Landscape as a metaphor of the soul ( moonrise over the sea, Caspar David Friedrich , oil on canvas, 1822)

The melancholy ( Latin melancholia, melancolia , from ancient Greek μελαγχολία Melancholia "Schwarzgalligkeit" from μέλας melas "black" and χολή Chole "bile"; "Black bile": according to the to the 19th century in the European medical prevailing Humoralpathologie the cold -dry body juice) describes a mood of mood characterized by melancholy or melancholy, pain, sadness or thoughtfulness, which usually does not go back to any specific trigger or cause. With regard to a psychological disposition or a clinical picture , the term melancholy was largely replaced by the term depression in the 20th century . The melancholic is a person in whom the melancholic temperament predominates. The term melancholy is used in philosophy, medicine, psychology, theology, and the arts. The romantic Weltschmerz and gloom have a similar meaning .

The historical development of the concept of melancholy has its starting point in the ancient humoral pathology , also known as the doctrine of four juices , which is ascribed to the Greek doctor Hippocrates of Kos . He or the Hippocratics explained the μελαγχολία melancholia as an excess of black (burned) bile ( μέλαινα χολή mélaina cholḗ ), which pours into the blood. The earliest evidence of the word can be found in the Hippocratic writing About Air, Water and Locations (around 420 BC).

The black bile, expressed in melancholy and other mood changes, was considered in humoral physiology to be the final state of scorched (burnt) body fluids (blood, phlegm and yellow bile).

Galen (2nd century AD), who summarized the medical knowledge of his time and followed the ideas of the Hippocrats , also saw the origin of melancholy in an excess of black bile, one of the four humors or, in Latin, humores , which is in the spleen and the testicles would be produced. According to the theory of temperament , the black bile determines the character of the melancholic and corresponds to the earth element , autumn, adulthood, and the afternoon.

The black bile was held in ancient times as the cause of the formation of thromboses in the blood vessels.

In the 9th or 10th century, the Baghdad doctor Ishāq ibn ʿImrān, who was also the personal doctor of Ziyadat Allah III. became active, a book later translated into Latin by Constantinus Africanus about a melancholy that occurs in three forms. In addition to the detailed description of melancholy ( De accidentibus melancholiae ), Contantinus also passed on systematic therapy instructions for the first time ( Quo modo haec passio habet medicanda ).

In the Middle Ages, melancholy was associated with the constellations Libra , Scorpio and Sagittarius . In the Renaissance the view became popular - especially through the writings of Marsilio Ficino and Agrippa von Nettesheim  - the melancholy were under the influence of the planet Saturn .

In the Middle Ages in particular, amor hereos , the love sickness usually explained by humoral pathology, was part of the syndrome of melancholia .

The meaning of the word melancolia was varied and included mental confusion, depression due to developmental disorders as well as the symptoms associated with meningitis, the delirium , the cretinism and eclampsia and all forms of already by Constantine the African as a form of melancolia described epilepsy as well as asthma , migraine , Tremor and paralysis as well as hysteria came under this collective name. Before the term changed from a mere clinical picture to a “feeling” at the end of the Middle Ages, melancholy was viewed negatively as a mental ailment in both ancient and medieval literature. An exception is a fragment with the title XXX, 1, which was temporarily assigned to Aristotle , but probably comes from Theophrastus . In it, the author expressed himself positively about melancholy, as this is the prerequisite for “divine madness” ( mania ). The question raised here: "Why were all outstanding men, whether philosophers, statesmen, poets or artists, evidently melancholics?" Later influenced the romantic aesthetic of genius .

The English cleric Robert Burton published with his comprehensive work Anatomie der Melancholie (first 1621) a compendium of the then known knowledge on the most diverse forms and forms of melancholy according to the humoral pathological state of knowledge.

With the discovery of the blood circulation by the English researcher William Harvey in 1628, the previously widespread theories about the physical origin of melancholy no longer corresponded to the scientific status of the time. Nevertheless, the term and its associations, like the four-hump theory , continued to have an impact on various areas of knowledge.

The term melancholy has broken away from its origins in the teaching of body fluids and has partly continued to be used for medical diagnoses on a different basis, but partly has also become an everyday term with a large field of meaning that has not only pathological dimensions.

In his essay Mourning and Melancholy from 1917 Sigmund Freud differentiates melancholy from mourning : It is characterized by the fact that the degradation of self-esteem is not remedied by positive mourning work: “Melancholy is psychologically distinguished by a deep, painful mood, a suspension of interest in the outside world, through the loss of the ability to love, through the inhibition of any achievement and the degradation of self-esteem, which is expressed in self-reproaches and self-abuse and increases to the delusional expectation of punishment. " Freud sees these self-destructive aspects as the cause of the suicide risk the melancholic.

In the lexicon of psychology , the melancholy type is spoken of as a “medieval term”, namely its connection with the outdated theory of body fluids. The term is rarely found in today's psychology. According to Meyer's Kleines Lexikon Psychologie (Mannheim, Vienna, Zurich 1986), melancholy is now sometimes used synonymously with endogenous depression .

In the Middle Ages, melancholy became known as the monk's disease and was described as closely related to the concept of acedia , although the relationship between the two concepts was subject to historical changes. Acedia is a common theme in theological literature, for example with Thomas Aquinas in the Summa Theologica . The earliest description of the acedia phenomenon is believed to come from Evagrius Ponticus , who lived as an early Christian anchorite in Egypt. Among other things, the visitation by the demon of noon is described . Johannes Cassian took over Evagrius' approaches and passed them on to Thomas Aquinas. In 16th century Protestantism , melancholy was seen as a temptation from the devil , which the believer had to pass like a test. Against this background, the occasional sinking into a state of despair appeared as a confirmation of the seriousness of one's own faith. On the other hand, the destructive power of melancholy was recognized and spiritual means such as prayer or spiritual songs and secular diversion through music (based on the biblical model of David and Saul ) and cheerful company were recommended as therapy . The personal experience of Luther , who was often overwhelmed by sadness, also played a style-forming role. Luther and his successors from the Protestant Orthodoxy of the 16th century dealt with melancholy in numerous consolation writings . In the Counter-Reformation propaganda that began in the second half of the 16th century, melancholy was therefore often referred to as a typical disease of Protestants.

For the Catholic religious philosopher Romano Guardini , the real meaning of melancholy can only be understood from the spiritual, as "man's disquiet through the neighborhood of the eternal."

Melancholy runs through the entire history of literature as a major theme. Important writers like Walther von der Vogelweide (melancholy pose - I sat on a stone ), Jean-Jacques Rousseau , Christian Morgenstern and Friedrich Nietzsche have dealt with melancholy. The Renaissance poet Isabella di Morra wrote some melancholy poems. Nikolaus Lenau should be mentioned among the romantic poets . Poetry and music are considered forms of therapy for melancholy, at least since Marsilio Ficino .

The depiction of melancholy and the melancholy often projects the inner melancholy into the outside world. This can be the location of the self in a landscape, a room, an allegorical or symbolic space. Albrecht Dürer's enigmatic copperplate engraving Melencolia I from 1514 shaped the allegorical conventions of depicting melancholy for the following epochs (interpreted in Gottfried Keller's poem Melancholie, among others ). In vanitas representations, the lifelessness of the objects is emphasized as a lack of human community.

In addition to the melancholy harmony of the soul with a landscape, especially in romanticism , there are many wide spaces and landscapes, often also a strangely aimless or shifted perspective, among others in the following well-known melancholy representations or in Giorgio de Chirico ( loneliness (Melanconia ) 1912, The Melancholy of a Fine Day 1913, Melancholy of a Politician, Gare Montparnasse (Melancholy of Departure) 1914, Hermetic Melancholy 1918/1919).