The Scorpion ( Latin Scorpio, Scorpius, Scorpios ; astronomical sign ♏; name of the IAU Scorpius , abbreviated Sco ) is a constellation of the ecliptic . 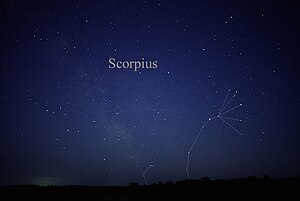 Scorpio is one of the most imposing constellations in the southern night sky of the northern hemisphere. A twisted, bright chain of stars forms the clearly recognizable form of a scorpion with claws and an upright sting.

It is located near the center of the Milky Way and therefore contains a large number of star clusters and nebulae. The sight in the binoculars is particularly impressive .

Due to its southern location, the constellation can only be found just on the southern horizon from Central Europe in summer and only partially visible from Germany, Austria and Switzerland.

The ecliptic runs through Scorpio, therefore the sun , moon and planets move through the constellation. It is one of the signs of the zodiac . Due to the precession movement of the earth's axis, the time of the passage of the sun has shifted compared to ancient times. The sun is currently in Scorpio from November 23rd to November 30th . That is the shortest length of stay in a constellation during the year. 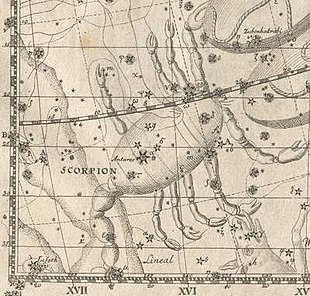 Engraving of the constellation Scorpio

The constellation was already known in Sumerian times and was associated with the goddess Išḫara . The current meaning of the constellation goes back to the ancient Greeks. Scorpio is one of the 48 classic constellations described by Ptolemy .

The Chinese saw in the constellation a mighty but benevolent dragon, whose appearance heralded the spring.

Even pre-Columbian cultures saw a scorpion in the constellation. The Maya used the term zinaan ek (stars of Scorpio). John Barantine of the Point Observatory in New Mexico sees a stone carving of the Hohokam culture in North America a representation of the supernova of May 1, 1006 in the constellation Scorpio.

In Greek mythology there are different narratives about the constellation.

Artemis , the goddess of the hunt, is said to have ordered the scorpion to kill the hunter Orion . He had incurred her anger through his resolution to kill all wild animals and monsters. According to another tradition, the jealous Apollo sent the Scorpio because Artemis was fond of Orion. Later, since he regretted the death of his friend, he took him to heaven. According to other sources, it was Hera , wife of Zeus , who had Orion killed by the scorpion because he had raped Merope . There are also different accounts of the outcome of the encounter. Orion dies from a stab in the heel or survives because he trampled the scorpion before. The two opponents were moved as far apart as possible in the sky so that they never meet there. When the Scorpio rises, the Orion sets and vice versa.

Another legend brings the scorpion into connection with Phaeton , the mortal son of the sun god Helios . Phaeton persuaded his father to let him have the sun chariot drawn by fiery horses. The inexperienced Phaeton soon lost control of the car. When the horses saw the sky scorpion with the sting raised, they went through and the chariot sped across the sky. The angry Zeus threw lightning, whereupon the fatally struck Phaeton fell into the river Eridanus .

λ Scorpii, the second brightest star in Scorpio, is a blue giant star 600 light years away. The name Shaula comes from Arabic and derives from "the raised (sting)".

The yellow shining 18 Scorpii, 46 light-years away, is a star that is very similar to our sun in size, temperature and luminosity . With an apparent brightness of 5.49, it is barely visible to the naked eye.

The brightest star in Scorpio is Antares (α Scorpii). The name is derived from "Anti-Ares" and means "Gegenmars" (the Greek god of war Ares corresponds to the Roman god Mars ). Due to its reddish color, the star in the night sky resembles the planet Mars . Another historical name is "Kalb al Akrab", Arabic for "heart of the scorpion". The Latin name "Cor Scorpii" has the same meaning.

Antares is a binary star system 600 light years away. At a distance of 2.4 arc seconds there is a companion of the 6th magnitude. It is not easy to observe because it is outshone by the bright main star. You need a telescope from 15 cm opening.

The main star is a supergiant with 10,000 times the luminosity and 700 times the diameter of our sun. If it were in the center of our solar system , it would protrude beyond the orbit of Mars.

β Scorpii is a binary star 530 light years away. Both stars can be observed with a small telescope. The Arabic name Akrab means "scorpion".

The ξ Scorpii system, 93 light-years away, consists of six stars, five of which orbit each other. Two stars can easily be observed in the telescope.

The system ν Scorpii is 437 light years away and consists of five stars. Four stars are visible in a telescope with an aperture of 15 cm or more.

The star σ Scorpii, 735 light years away, has a companion of the 9th magnitude. Due to the wide angular distance of 20 arc seconds, the system can be observed with a small telescope.

U Scorpii is a recurring nova (magnitude 8–9 mag) with a normal magnitude of 18.5 mag, the last outbreak of which occurred in February 1999. It is a binary star and eclipsing variable with a period of 1.23 days and a decrease in brightness of 0.4 to 0.8 mag. The former main star has already become a white dwarf and a candidate for an imminent supernova. The distance is estimated to be around 20,000 light years.

The main star of the system σ Scorpii changes its brightness over a period of 5 hours and 55 minutes.

A variety of foggy objects are visible in Scorpio. The French astronomer and comet hunter Charles Messier included five in his catalog ( Messier catalog ).

Immediately to the east of the bright star Antares is the globular cluster M 4, 6,000 light years away . Already with the binoculars it can be seen as a foggy spot. With a telescope from 10 cm opening single stars can be seen.

Not far north of Antares and therefore also easy to find is the globular cluster M 80 . Due to its distance of 36,000 light years, it is only visible in telescopes with an aperture of 6 cm or more.

The open star cluster M 6 is about 2,000 light years away. About 70 stars can be seen in binoculars. Because of its shape, the star cluster is also known as the “butterfly nebula”.

The open star cluster M 7 , 800 light-years away, contains about 80 stars that are brighter than the 10th magnitude.

M 6 and M 7 are among the most impressive open star clusters visible from Europe.

In a study published in 1933, the object H 2-1 was already noticed , which Guillermo Haro classified as a planetary nebula in 1952 .