The swordfish ( Latin Xiphias and Dorado ) is a small constellation in the southern sky. In it lies the southern pole of the ecliptic and the large Magellanic Cloud . 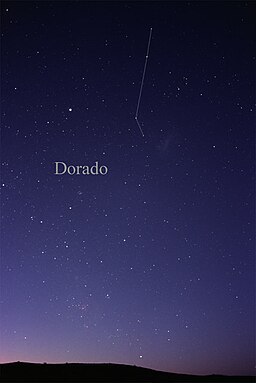 The Dorado constellation as seen with the naked eye

The swordfish is an inconspicuous constellation consisting of several stars that are arranged in a line . It's easy to find because it's southwest of Canopus , the second brightest star in the sky.

The greater part of the conspicuous Large Magellanic Cloud , a companion of our galaxy, is located in the swordfish .

Because of its southern location, it can not be seen from Europe .

The swordfish is one of the twelve constellations introduced by Dutch navigators Pieter Dirkszoon Keyser and Frederick de Houtman at the end of the 16th century . Originally the constellation was called "Goldfish" and was depicted on a Dutch celestial globe that has since disappeared . Johann Bayer took it in his 1603 published sky atlas Uranometria .

α Doradus , the brightest star in the swordfish, is 200 light years away. It belongs to the spectral class A0 III.

β Doradus is a variable star of the Cepheid type . Its brightness changes with a period of 9.842 days. Although it is 8,000 light years away, it can be clearly seen with the naked eye. This makes it one of the most luminous stars in the sky.

γ Doradus (Gamma Doradus, HR 1338) is the prototype for variable stars, the brightness of which fluctuates due to non-radial pulsations of the surface and which are referred to as Gamma Doradus stars . In addition, it shows some inexplicable fluctuations in its brightness.

NGC and other objects

The Large Magellanic Cloud (English: Large Magellanic Cloud , LMC) is the brightest and largest nebulous object in the night sky. It has an extension of 5 ° by 6 °. It is a smaller companion galaxy to our Milky Way galaxy around 160,000 light years away. It contains several star clusters and nebulae that can already be observed with small telescopes , such as the well-known tarantula nebula . The Magellanic Cloud is a fantastic sight in prism binoculars or telescopes. In 1987 a supernova flared up there , the closest to earth in 383 years.

The Tarantula Nebula (NGC 2070) is an emission nebula in the Large Magellanic Cloud and thus also 160,000 light years away. It has 5,000 times the luminosity of the Orion Nebula and is the largest known object of its kind in the universe. In the smaller telescope it can be seen as a misty spot. Structures that are reminiscent of a spider and gave the nebula its name become visible in larger instruments. It contains large star clusters such as R136 and Hodge 301 , which illuminate the gas nebula from within. R136a1 in the cluster R136 is the brightest and most massive of all stars known to be stable.