The title of this article is ambiguous. Further meanings are listed under galaxy (disambiguation) .

A galaxy is a large collection of stars , planetary systems , gas nebulae , dust clouds , dark matter and other astronomical objects with a total mass of typically 10 9 to 10 13 solar masses (M ☉ ) bound by gravity . Their diameter can be several hundred thousand light years . While large galaxies often form the structure of spirals , dwarf galaxies are mostly of an irregular type . There are also other types and forms . The Milky Way , home galaxy of the Solar System , is a barred spiral of around 1.5 trillion M ☉ with about 250 billion stars. With the latest technology, more than 50 billion galaxies can be observed from Earth. Since 2016, research has assumed that there are around one trillion galaxies in the observable universe.

The name comes from the synonymous ancient Greek γαλαξίας galaxías and goes back to an ancient legend , according to which it is the splashed milk ( γάλα gála ) of the goddess Hera when she wanted to breastfeed Heracles . In German, the galaxy ( singular ) is specifically the Milky Way. In English ( galaxy , for the galaxy also Galaxy ) there is a similar distinction. Alexander von Humboldt used the term "world island". 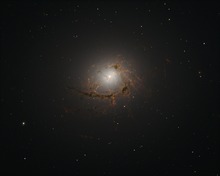 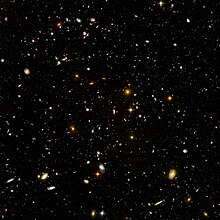 The ultra-deep field shows around 10,000 galaxies in a thirteen millionth part of the sky

Galaxies vary greatly in appearance (morphology), size and composition. With a diameter of around 100,000 light years, the Milky Way is one of the larger galaxies. Its closest neighboring galaxy of comparable size is the Andromeda Galaxy at a distance of around 2.5 million light years. Together with other galaxies of lower mass, both galaxies form the local group . Galaxies often appear in groups or clusters of up to a few thousand members.

Before the power of astronomical telescopes was sufficient to break up distant galaxies into individual stars, they appeared as " nebulae ". For a long time it was unclear whether these “spiral nebulae” belong to the galaxy or whether they form their own star systems. Immanuel Kant already suspected milky way-like star systems in the “misty stars”, and in 1923 Edwin Hubble succeeded in clarifying this question. He determined the distance to the Andromeda Nebula and found that it is far too far away to belong to the Milky Way, i.e. it is a galaxy of its own.

Galaxy types according to the Hubble classification: "E" stands for elliptical galaxies, "S" stands for spirals and "SB" for spiral barreds

According to their shape, galaxies are divided into various main groups and subgroups of the so-called Hubble classification (see morphology ). This classification was established by Edwin Hubble and, with some extensions, is still in use today, although it was originally only based on a small sample of nearby and bright galaxies that could then be observed in the optical wavelength range. The Hubble classification is purely empirical and says nothing about the evolution of galaxies. The individual types are:

In addition to the Hubble classification, there are also other classifications, for example according to Gérard-Henri de Vaucouleurs or the Yerkes classification, which are, however, used less often. The rough classifications often do not do justice to the multitude of galaxy types found, which is why many other characteristics are used to describe galaxies. 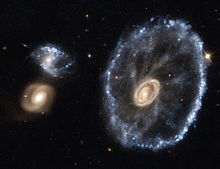 The active galaxy NGC 7742 has a very bright core.

There are other forms of galaxies that cannot be classified in the above scheme or complement it. These include:

The microwave background reflects the distribution of matter in the universe 380,000 years after the Big Bang . At that time the universe was still very homogeneous: the density fluctuations were in the order of 1 in 10 5 .

In the context of cosmology , the increase in density fluctuation can be described by gravitational collapse . Above all, dark matter plays a major role, as it gravitationally dominates over baryonic matter. Under the influence of dark matter, the density fluctuations grew until they collapsed into dark halos . Since only gravity plays a role in this process, it can now be calculated with great accuracy (e.g. Millennium simulation ). The gas followed the distribution of dark matter, fell into these halos, condensed and the stars formed. The galaxies began to form. The actual formation of the galaxies is not understood, however, because the stars just created influenced the incoming gas (the so-called feedback), which makes a more precise simulation difficult.

After their formation, the galaxies have evolved. According to the hierarchical model of galaxy formation, galaxies grow mainly by merging with other galaxies. Then the first proto-galaxies, which were still relatively low in mass, formed in the early cosmos under the influence of gravity. Gradually, so the idea, these galaxy precursors merged through collisions to form full-grown specimens such as the Milky Way and even larger galaxies. The relics of such collisions can still be seen in the Milky Way as so-called star currents . These are groups of stars whose common movement pattern points to an origin outside the Milky Way. They are attributed to smaller galaxies that were torn apart and swallowed up by the Milky Way by tidal forces.

The observation of highly redshifted galaxies makes it possible to understand this development. In particular, deep surveys such as the Hubble Deep Field had great success . Overall, the formation and development of galaxies as a current research subject is not yet complete and therefore cannot yet be explained with sufficient certainty.

Formation of the spiral arms 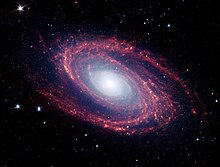 The spiral arms are brighter than the rest of the disk and do not represent rigid structures.

Even if in spiral galaxies it looks as if the galaxy only exists within the spiral arms , there are also a relatively large number of stars in less luminous parts of the galaxy disk.

A galaxy does not rotate rigidly like a wheel; rather, the individual stars run out of and into the spiral arms. The spiral arms are visible expressions of standing density waves (like sound waves in air) that run around in the galactic disk. This theory was first proposed by Chia-Chiao Lin and Frank Shu in the 1960s. After that, the density of matter in the spiral arms and in the central bar is increased, so that a relatively large number of bright, blue, short-lived stars emerge from the interstellar medium. This makes these areas appear brighter than their surroundings. These density waves arise from the interaction of all orbits of the stars, because the stars do not move around a fixed center (a black hole in the center of the galaxy) like the planets in the solar system , because the total mass of the galaxy is not concentrated enough for this. Therefore, a star does not return to its starting point after one orbit around the center of the galaxy, so the orbits are not ellipses , but have the shape of rosettes . Density waves are created when many stars move at the same speed. In a barred spiral galaxy, for example, all orbits are aligned in the same way, whereas in a pure spiral galaxy, they are still shifted against each other. The orbits are synchronized by means of gravitational feedback . Using computer simulations that also take interstellar gas into account, the formation of spiral arms can even be modeled. It shows that these are by no means static, but arise and disappear. After that, every galaxy goes through a cycle (duration approx. Ten billion years) of constant conversion from the bar to the spiral shape and back. Furthermore, the spiral arms disrupt the trajectories of the stars, which leads to the so-called Lindblad resonances .

When galaxies collide, gas clouds within the galaxy can become unstable and collapse. This creates new stars. The stars of the interacting galaxies themselves very rarely merge with one another in this process. The merged galaxies shine in the blue light of the newly formed stars. Such an interaction can last hundreds of millions of years. The shapes of the galaxies can change significantly. Interactions between two galaxies are quite common. The stars can be greatly deflected by the effects of the galaxy's gravity. Examples of such colliding galaxies. The systems M 51 - NGC 5195 and the “antenna” galaxies NGC 4038 - NGC 4039 (see illustration) in the constellation of eagles are partially merged .

Overview of the structures of the universe (from large to small)