Dwarf galaxies are extragalactic star systems that lie between the smaller globular clusters and the larger "normal" galaxies . In general, it is now assumed that there are no fundamental differences between “normal” galaxies and dwarf galaxies as systems and that their properties make a continuous transition between them.

Dwarf galaxies are found as satellites of large galaxies, as in the case of the Magellanic Clouds in the Milky Way . They can be found both in the walls of the gigantic empty spaces of the universe - there mostly irregular dwarf galaxies - and especially often in groups of galaxies and galaxy clusters - there, elliptical dwarf galaxies dominate.
Dwarf galaxies are significantly more common - roughly a factor of 10 - than the large galaxies. However, they are more difficult to observe at greater distances and because of their low surface brightness.

Well-known - because relatively bright - examples are the two companions M 32 and M 110 of the Andromeda Galaxy or the Sagittarius dwarf galaxy , which belong to the 24 known dwarf galaxies that orbit the Milky Way .

Morphologically , dwarf galaxies are divided according to their shape into

The number of stars in a dwarf galaxy is only between a few 100,000 and a few billion stars, while our spiral-shaped Milky Way has around 300 billion stars and the large elliptical galaxies can contain several trillion stars.

Due to their small number of stars, dwarf galaxies are only weakly gravitationally bound and lose all interstellar matter within a short time to form new star generations. Due to the low internal gravitational binding, the dwarf galaxies are also destroyed by close encounters with larger galaxies. A dissolving dwarf galaxy shows itself as a stellar current in which the stars still show a similar self-motion , but are already distributed over a large area of ​​space. An example of this is the Sagittarius dwarf galaxy with the Sagittarius Current. In the course of a few hundred million years the stellar current dissolves and the stars merge into the galactic halo . The galactic halo with its old stars and partially retrograde orbits is likely to consist mainly of the remains of dwarf galaxies.

The weakest known dwarf galaxies, the ultra-faint dwarf galaxies (ger .: Ultra faint dwarf galaxies, UFDs), show a surface brightness of 28 likes per square arcsecond or less. Their luminosity is a thousand times the luminosity of the sun below that of globular clusters . While the half-light radius of globular clusters is usually less than 50 parsecs, the radius of ultralight dwarf galaxies can reach up to 1,000 parsecs. The star density in these dwarf galaxies is correspondingly low and their speed dispersion is less than 4 km / s. Their shape is often irregular due to gravitational interactions with the home galaxy they orbit. The low density is a result of an interrupted stellar evolution, since the massive stars of the first generation can accelerate interstellar matter to escape speed when they explode as a supernova or through the fast stellar wind . As a result, the gravitational interaction with the disk of the Milky Way leads to a broadening in the direction of movement. This is known as the stellar current , which mixes into the galaxy's halo over billions of years .

The star population in the UFDs is mostly older than 10 billion years. The only exception known so far is Leo T, in which star formation is likely to still occur.

Low Surface Spheroidal Dwarf galaxies are extremely faint, lens - shaped dwarf galaxies with a luminosity of several hundred thousand solar luminosities . This value is below that of globular clusters and some open star clusters . The diameter of the core of the Dwarf Spheroidal Galaxy (dSph) is 300 to 1000 parsecs , whereby the surrounding halo can be detected in a diameter three to ten times larger. Only electromagnetic radiation from stars can be detected from dSph and there is no evidence of interstellar matter or dust in these stellar systems. The typical age of dSph in the local group is 1 billion years.

Ultra Density dwarf galaxies (ger .: ultra compact dwarf galaxy, UCDs) are a recently discovered in 2003 a special form of dwarf galaxies with extremely high density central star. Up to 100 million stars are within their small diameter, which is less than 200 light years in size. According to the current theoretical models, these galaxies have been robbed of their outer regions (both gas, dust and stars) by the tidal action during their passages into the interior of their dense galaxy clusters , where they are at home. Accordingly, several of them were identified in the Virgo Galaxy Cluster , the Fornax Galaxy Cluster , Abell 1689 and the Coma Galaxy Cluster.

In 2014, a supermassive black hole of 21 million solar masses was discovered in the ultra-compact dwarf galaxy M60-UCD1 (five times more than the supermassive hole in our galaxy), that is 15 percent of the total mass of the galaxy. The galaxy is one of the UCDs with the highest observed star density (15,000 times higher than in the vicinity of the solar system) and it is 54 million LJ from Earth. It is the smallest galaxy found to date with a supermassive black hole. It is believed that the galaxy used to be much larger, but that most of its stars and dark matter were snatched from it ten billion years ago when it passed the nearby galaxy Messier 60 and that this is typical of other massive dwarf galaxies, which probably also often harbor supermassive black holes. 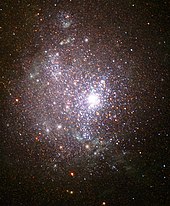 NGC 1705 , example of a BCD galaxy. Image of the Hubble Space Telescope .

BCD galaxies cool down as they continually form new stars using up their interstellar gas. They typically have star formation rates in a range of 0.13 M ☉ up to 1.3 M ☉ per year. As the development of these galaxies progresses, the shape of this type of galaxy also changes.

The closest examples of this type include the galaxies NGC 1705 and NGC 2915 .

The Green Peas from the Galaxy Zoo

Typical spectrum of a pea galaxy

Pea galaxies (also just pea or green pea , dt. "Pea" or "green pea") represent a type of luminous starburst galaxies , and thus belong to the dwarf galaxies that have a very high rate of star formation . They were named this because of their appearance and small size in the Sloan Digital Sky Survey images .

Pea galaxies were discovered in 2007 as part of the volunteer program of the Galaxy Zoo astronomy project .

They are compact, oxygen-rich emission-line galaxies that were discovered at redshifts between z = 0.112 and 0.360. These low-mass dwarf galaxies are generally no larger than 16,300 light years (5 kpc ) in diameter and are located in regions with less than 2/3 an average galaxy density. An ordinary Green Pea has a redshift of z = 0.258, a mass of about 3.2 billion M ☉ and a star formation rate of 10 M ☉ per year, an equivalent width of the doubly ionized oxygen [O III] of 69.4  nm and a small one Metallicity . These dwarf galaxies go through a galaxy-wide star formation and do not have an active galaxy core . They are characterized by strong emission lines at the [OIII] wavelength of 500.7 nm, whereby this forbidden transition within the light spectrum is only possible at very low densities. Pea galaxies are among the lowest-mass, star-forming galaxies in the local universe .

Extreme Emission-Line Galaxies ( EELG ) are dwarf galaxies whose emission lines show an equivalent width of the forbidden doubly ionized oxygen and / or the hydrogen lines (mostly Hα) of more than 100 angstroms .

They are interpreted as a short phase with an extreme starburst , during which the majority of the stars in these dwarf galaxies are formed. From the observed frequencies of EELGs it is concluded that most dwarf galaxies have passed through a phase as the Extreme Emission-Line Galaxy. The properties of the Extreme Emission-Line Galaxies correspond to extreme examples of HII galaxies as well as the blue compact dwarf galaxies in the local universe. While the frequency of EELGs in the local universe is quite low, it increases by more than an order of magnitude for redshifts with z > 2. The EELGs show only slight signs of dust and their star population is therefore still very young, is in a stage before a large number of supernovae and AGB stars have already formed. The star formation rate reaches values ​​of up to 35 solar masses per year.