SDSS is a redirect to this article. Further meanings are listed under SDSS (disambiguation) .

Building of the telescope. The structure above the platform can be moved as a whole on rails and thus completely releases the telescope for sky observation.

The SDSS ( SDSS ) is a screening one third of the sky by borrowing from five wavelengths and subsequent spectroscopy of individual objects.

SDSS is a joint venture funded by the Alfred P. Sloan Foundation . Initially, institutes in the USA , Japan , Korea and Germany were involved. With a specially constructed 2.5 m telescope at the Apache Point Observatory , the positions and brightnesses of around 470 million celestial objects were measured. Using spectra from over a million galaxies and quasars , their distances and properties were determined. Unlike previous surveys (such as the Palomar Observatory Sky Survey ), SDSS works exclusively with electronic detectors that have linearity and significantly higher sensitivity compared to photo plates. The observations have been in progress since 1998 , and several spectroscopy projects have followed the original sky survey.

The data is initially only accessible to the participating institutes, but is then published regularly in data releases . 14 releases had taken place by 2018. SDSS thus became the basis of more than 8000 scientific publications as of 2018, far beyond the initial goals and participating scientists.

For the Sloan Digital Sky Survey, a telescope with a primary mirror diameter of 2.5 m was built at the Apache Point Observatory, which was equipped with a camera and a spectrograph for the original sky survey. 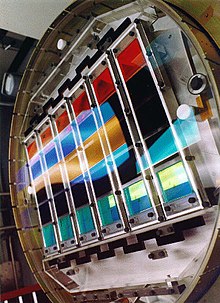 SDSS camera with 5 different colored filters in front of 6 CCDs each.

The camera consisted of a total of thirty large CCD chips, each with 2048 × 2048 picture elements. The CCDs were arranged in five rows of 6 chips each. The five rows observed through various optical filters (u 'g' r 'i' z ') at wavelengths of approximately 355.1, 468.6, 616.6, 748.0 and 893.2 nm . The area of ​​the sky to be observed was scanned in narrow strips using the rotation of the earth. Around 200 GB of image data were obtained during one night. In the various project phases, a total of around 14,500 square degrees of the sky were observed with the camera, sometimes several times. The first phase focused on about 8,000 square degrees at the northern pole of the Milky Way. In the five bands, objects of 22.0, 22.2, 22.2, 21.3 and 20.5 magnitudes can be detected with 95% probability. In autumn this area is out of sight. Instead, a stripe of 300 square degrees south of the plane of the Milky Way was repeatedly observed, so that for this stripe 82 23.9, 25.1, 25.6, 24.1 and 22.8 magnitudes with at least five times the noise was achieved. The brightness and shape of the celestial objects were automatically measured and an initial classification was carried out according to type and distance. The camera was taken out of service in 2009, since then SDSS has only been working spectroscopically.

Spectra are obtained from selected objects. A plate has holes in the positions of the selected objects. This plate is brought into the focal plane of the telescope. Glass fibers transport the light from these holes to a spectrograph . About 6 to 9 such sets can be won during one night. In the first phase of the project, the spectrograph worked with 640 fibers, each of which recorded the light of an area with a diameter of 3 arcseconds in the sky and observed the wavelength range 380–920 nm. Later project phases retained the concept of the fiber-coupled spectrograph, but varied the number of fibers Wavelength range and covered area in the sky according to your scientific goals.

Although SDSS only covers part of the sky, it can capture much weaker objects than previous sky surveys such as the Palomar Observatory Sky Survey . With precise photometry in the five filters, the type and redshift of the galaxies, quasars and stars can also be estimated immediately. The spectra provide exact redshifts and classifications. More detailed investigations can then be carried out by other observatories with even more powerful telescopes.

An important goal when planning the SDSS was the mapping of the foam-like, large-scale structure of the universe, consisting of galaxy clusters , filaments with a lower galaxy density and intervening cavities ( voids ) with very few galaxies. Among other things, the detection of baryonic acoustic oscillations in the galaxy distribution measured with SDSS was successful in 2005 .

The many spectra contain extensive samples of many different types of galaxies from which their properties can be determined with good statistical significance. However, extremely rare objects can also be found with SDSS. Many quasars with redshifts above 6 were discovered in the SDSS.

In addition to the large-scale structure of the universe, the work at the SDSS brought many other results that were not planned by the initiators at the time. Examples are:

Due to the recording technique using narrow strips in different spectral ranges, asteroids can be recognized very easily using parallax and their colors can be determined with great accuracy. SDSS has measured over 100,000 asteroids and provided information on their composition and surface properties.

The recordings in two infrared bands simultaneously with three other colors allow the SDSS team to identify brown dwarfs particularly easily and reliably.

SDSS data provided brightness, colors and high-precision position information for fixed stars that are distributed over an extensive area and have common properties: they each belong to a stream of stars with a common movement and origin. Numerous members of the former pebble cluster Palomar 5 and the dwarf galaxy in Sagittarius (Sagittarius Dwarf Spheroidal Galaxy) could be identified with certainty . A current that winds around the entire Milky Way could have come from the Canis Maior dwarf galaxy.

In addition to star currents, 17 dwarf galaxies have so far been discovered as companions of the Milky Way with the help of the data from the SDSS . Due to their very low star density, these are hardly recognizable with conventional methods.

Phases of the project

In this first phase, most of the original survey plan, later called the Legacy Survey , was carried out using five-band photometry and spectroscopy.

In addition to the Legacy Survey, which was completed in Phase II, two further projects took place:

With SEGUE, spectra of 230,000 stars were obtained, which provide information about the spectral type, age and composition of the stars and radial velocities with an accuracy of better than 10 km / s. This creates a three-dimensional picture of the structure of the Milky Way, the distribution of different star populations and their development.

Through repeated observations of the same 300 square degree area of ​​the sky, several hundred supernovae and thousands of other variable objects were discovered.

Similar to SEGUE, APOGEE dedicated itself to the spectroscopy of stars in the Milky Way. By observing in the near infrared at 1.6 μm wavelength, cosmic dust can be penetrated better and the structure of a larger part of the Milky Way can be clarified.

BOSS observed spectra of 1.5 million luminous galaxies up to redshift z = 0.7 and of 160,000 quasars at z ~ 2.5, and gives a much better picture of the large-scale structure of the universe than the Legacy Survey. The measurement of baryonic acoustic oscillations at different redshifts allows conclusions to be drawn about the nature of dark energy .

MARVELS was used to search for exoplanets by monitoring the radial speeds of stars.

SEGUE-2 is an extension of the original SEGUE survey by around 120,000 stars mainly in the halo of the Milky Way.

This extended spectroscopic investigation of galaxies and quasars also contains sub-projects that are dedicated to variability and active galaxy nuclei selected via X-ray emission .

Mapping Nearby Galaxies at APO (MaNGA)

MaNGA is the first SDSS project that delivers spatially resolved spectroscopy of nearby galaxies. To do this, a whole bundle of glass fibers is aimed at the galaxy.