In the case of a vector representation of any movement in polar or spherical coordinates , the radial speed (from the Latin radius "rod", "wheel spoke") denotes the speed component along the ray (radius) that points from the origin of the coordinates to the object in question.

The other speed components are angles that change over time, i.e. rotations , while the radial speed is a translation .

In the case of observations, the radial velocity can be deduced directly from the frequency shift of the carrier signal used for the observation ( Doppler effect ). Either the change in a wave reflected by the object ( sonar , radar ) or the change in a wave emitted by the object (observational astronomy ) is observed , provided that its original frequency is known. As a special feature, the Doppler frequency occurs in the case of a reflected wave on the outward and on the return path, i.e. it has twice the value of a wave emitted by the object.

In radar and sonar technology, the radial speed is the measure of a Doppler frequency imposed on the transmission signal . The evaluation of the Doppler frequency is used to differentiate between moving and stationary objects ( moving target indication ): the property “moving” can only be recognized if a radial speed is present; If an object only moves with a tangential speed, it is only recognized as a stationary object .

Calculation of the radial speed from two different speed vectors.

If a radar is operated from a moving platform, both speeds flow into the radial speed; both directions of movement must be taken into account by means of a cosine relationship . The radial speed is measured in approximately the opposite direction of movement:

where v 1 and v 2 are the respective velocities of the radar and the reflecting object, the angles θ 1 and θ 2 are the angular deviations of the courses from the direct line of sight to each other. If the platform and the reflecting object have approximately the same direction of movement, at least one sign changes in the equation , since one of the angles is greater than 90 ° and its cosine is therefore negative.

Analogous to the general definition, in astronomy the radial velocity is the velocity component of a celestial body in the direction of the line of sight of an observer. The light from an object with a considerable radial velocity is subject to the Doppler effect:

The radial velocity of a star or another glowing, distant object can be measured precisely by recording a high-resolution spectrum of it and comparing its spectral lines with the spectral lines known from laboratory tests. The red or blue shift determined from this can be converted directly into a speed. In this way, however, it is only possible to determine the speed component in the direction of the object, not the component perpendicular to the line of sight (tangential speed).

The measurement of radial velocities (abbreviated RG) is u. a. an essential contribution to the study of the dynamics of star clusters , on a larger scale also of galaxies and for cosmology . If the spatial position of celestial bodies ( coordinates α, δ plus distance) and the two components of proper motion are known, the RG gives the complete velocity vector .

This allows various movement models to be created within the framework of celestial mechanics , for example for double and multiple stars, for star clusters and star streams , for the rotation of the Milky Way , the distribution of dark matter or the tidal forces between galaxies. The term recession velocity is also used for the relative movement between galaxies resulting from the expansion of the universe .

Some examples of radial speeds:

The first three mentioned radial velocities are heliocentric , as they result from spectroscopic measurements of the blue or red shift of the spectral lines of the respective object in the course of the year (a suitable mean calculation is required for this). For the neighboring galaxy M 31 and more distant galaxies, however, further reductions have to be made:
since the sun (and thus the earth-based observation) orbits the galactic center at high speed , the heliocentric radial speed does not correspond to the speed at which M31 and the Milky Way are converging to move; this value is significantly lower at −114 km / s.

In binary star systems , the orbital motion of the stars involved causes a continuous change in their radial speeds. This means that even with telescopically inseparable stars it can be determined that there are two or more systems (→ spectroscopic double stars ). Through a precise analysis of the radial velocities, the mass ratios and some orbital elements , such as eccentricity and the large semi-axis, can be estimated. 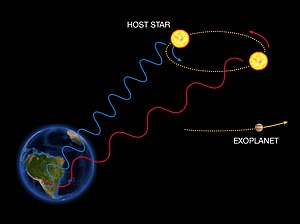 Search for exoplanets: If the star has an (invisible) companion, the radial speed fluctuates due to the movement around the common center of gravity: redshift when moving away from the earth, conversely blueshift.

The same method has been used very successfully to detect otherwise invisible planets ( exoplanets ) around stars. The rotational speeds of larger astronomical objects such as galaxies and galaxy clusters can also be determined with the help of the different radial speeds of the material they contain.