Historically, the name spectral line goes back to the fact that there is an entrance slit in conventional spectrometers , the shape of which is reflected on the screen or in the eye of the beholder. The name was later also transferred to the peaks (i.e. maxima) in a spectrum recorded as an intensity curve. 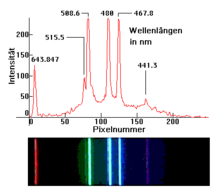 Spectral lines appear in instrumental atomic spectroscopy (such as nuclear magnetic resonance spectroscopy ) or in flame coloration . They are used, among other things, in astronomy to analyze the molecular structure of stars , planets and interstellar matter , which would otherwise be impossible. They were in the refraction of light from the sun through a prism discovered in the 19th century, from which then spectroscopes developed that allow a wide field of applications for the spectral analysis emerged.

A spectral line is the light of a precisely defined frequency that is emitted (emitted) or absorbed (absorbed) by an atom or molecule due to a transition from one energy level to another. The frequency is determined by the energy of the emitted or absorbed photon ; this is equal to the difference between the energies of the two quantum mechanical states . The frequency is characteristic of this particular transition in the given type of atom. Therefore, one can distinguish types of atoms by observing spectral lines.

An emission line shows up as a light line in the spectrum. It arises during the transition from a higher to a lower energy level , for example when an electron passes from an excited state to the ground state. A photon is emitted here. This can either happen spontaneously ( spontaneous emission ) or, e.g. B. with laser , are excited by light of a suitable frequency ( stimulated emission ).

When light is irradiated with a continuous spectrum (i.e. a frequency mixture), resonance absorption of photons of a suitable frequency results in an absorption line in which a transition from a lower to a higher energy level is induced - for example, when an electron passes through the photon from the valence band into the Conduction band is "lifted" (see photoelectric effect ).

When falling back to the lower energy level, photons become isotropic , i.e. H. in any direction, emitted.

Both of these lead to the light being diffusely scattered by the material being irradiated at this frequency . As long as there are enough absorbing atoms, it comes about

The light of a spectral line does not contain a single, sharply defined frequency, but comprises a (narrow) frequency range. The half- width of this area is called the line width . The line width of an emission line is made up of several contributions:

Lorentz profile
The natural line width results from the lifetime of the initial state through Heisenberg's uncertainty principle . This has the shape of a Lorentz curve . It is not possible to reduce this.
Gaussian profile
The thermal movement of the atoms creates a Doppler effect that shifts the light from an individual atom or molecule to red or blue, depending on the direction of movement. The statistical movement results in a broader frequency distribution overall. This effect is called Doppler broadening . It has the form of a Gaussian curve and is dependent on the temperature . Usually the Doppler width clearly dominates over the natural line width. The mechanism is also known as inhomogeneous line broadening .
Voigt profile
During a measurement, a Lorentz curve of finite width appears to have changed from its known form if the apparatus function of the measuring arrangement has a half- width in the order of magnitude of the Lorentz curve under consideration. The line shape can then be described by the convolution of the Lorentz curve and the apparatus function. If the apparatus function is a Gaussian curve, the result of the convolution is called a Voigt profile .

Absorption lines were first discovered in 1802 by William Hyde Wollaston and in 1814, independently of him, by Joseph von Fraunhofer in the spectrum of the sun . These dark lines in the solar spectrum are also called Fraunhofer lines .

The spectral lines, among other effects, contributed to the development of quantum mechanics . According to classical electrodynamics , an electron bound in an atom could emit electromagnetic waves of any frequency; the existence of discrete lines could not be explained classically. The discovery that the frequencies of the spectral lines of the hydrogen atom are proportional to an expression of the shape with whole numbers and led to the concept of the quantum number and finally brought Niels Bohr to his Bohr model of the atom , the first - now obsolete - quantum mechanical atom model. Modern quantum mechanics can predict the spectral lines of atoms with a very high degree of accuracy.