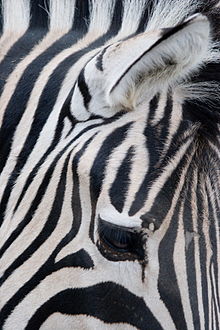 Most objects emit different amounts of light from different parts of their surface.

It is not possible to state how many lumens emanate from an infinitely small point on the surface of the body, since the finite number of radiated lumens is distributed over an infinite number of such points and therefore zero lumens are allotted to a single surface point. Instead, one looks at a small area surrounding the point in question, sets the (finite) luminous flux emanating from this area in relation to its (finite) area and allows the area to shrink to zero. Although the emitted luminous flux as well as the radiating surface both approach zero, the ratio of both tends towards a finite limit value ( differential quotient ), the specific light emission of the point, measured in lumens per square meter or equivalent lux . 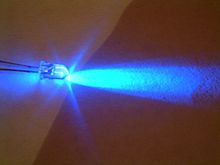 Most objects emit different amounts of light in different directions.

The concept of luminance combines both and in this way describes both the location and the directional dependence of the luminous flux emitted by an infinitely small surface element.

For the definition of the luminance, it is irrelevant whether the light emitted by the surface element is (thermal or non-thermal) self-emission , transmitted or reflected light or a combination thereof.

is the angle between the direction of radiation and the surface normal that is perpendicular to the surface element .

If the light intensity varies within the solid angle under consideration and / or the specific light emission within the luminous area , this mathematically simplified formula provides the mean value of the luminance over and . If the variation of the luminance is to be described in detail, the transition to the differential quotient gives:

The luminous flux emitted by a Lambertian radiator in a certain direction only varies with the cosine of the radiation angle . Such emitters are therefore particularly easy to handle mathematically:

In particular, when integrating over the solid angle, the now angle-independent luminance can be drawn as a constant in front of the integral, which often considerably simplifies the integration (see below).

An example of a diffusely luminous surface is an illuminated sheet of paper. If you look at it from different directions, the perceived luminance of the surface remains constant, while the total amount of light reaching the viewer (the light intensity) depends on the projected surface and therefore varies with the cosine of the viewing angle.

Sensitivity of the eyes

The observer perceives the luminance of the surfaces surrounding him directly as their surface brightness. Due to the adaptability of the eye , the perceptible luminance can cover numerous orders of magnitude. The specified values ​​vary from person to person and are also dependent on the frequency of the light.

Relationship with other photometric quantities

Luminance indicates how much light is emitted by a given infinitesimal surface element in a given direction, and thus provides the most detailed description of the luminous properties of the surface in question. Changing the defining equation for the luminance provides the infinitesimal luminous flux , that of the at the point , lying surface element in the solid angle element is irradiated, which in by the angle and is described direction:

The representation of the solid angle element in spherical coordinates was used:

The remaining integral now only depends on the shape and position of the solid angle and can be solved independently of . In this way, only by the sender and receiver geometry -dependent general view factors are determined and ready tabulated.

If, for example, the light emission is considered in the entire half-space overlooked by the luminous area, the value for the integral results

and the luminous flux of a homogeneous Lambertian spotlight of the surface in the entire half-space is simple:

In a similar way, the other photometric quantities can be derived from the luminance by integration over the total area and / or all directions of the half-space.

the coordinates , the position of the planar element to describe the total area and the angle , the observed beam direction with respect to the surface normal of state. In particular, it is again the angle between the radiation direction considered and the surface normal. The integral is to extend over that part of the entire surface for which is.

The light intensity is, so to speak, the sum of all the luminance of the body surface emitted in a certain direction.

In the special case of a Lambertian radiator is independent of the angles and and can be pulled outside the integral. As explained above, the remaining integral has the value , and the simple relationship results

In the special case of a Lambertian spotlight, the luminous flux can be calculated directly from the luminance:

, for a Lambertian radiator

If the luminance is also homogeneous in area (i.e. the same over the entire area ), then the integral is simplified to a simple multiplication:

as shown above through a direct integration.

The basic photometric law describes the exchange of light between two surfaces. The luminance is a key factor here.

Considering a surface element , which with the luminance of a spaced befindliches surface element illuminated so spans from viewed from the solid angle , and follows from the first equation in the previous section:

Here, and are the angles of inclination of the surface elements with respect to the common connecting line.

This is the basic photometric law . By integrating the two surfaces, the total luminous flux flowing from surface 1 to surface 2 is obtained .

The illumination density is analogous to the luminance, but defined for the case of irradiation. It indicates which luminous flux is received from the direction given by the polar angle and the azimuth angle per projected surface element and per solid angle element . The equations derived so far apply analogously. In particular, the following applies to the luminous flux received on the surface element and emitted by:

This time the solid angle spanned by occurs.

The luminous flux emitted from to and the luminous flux received from must be identical (unless light is lost through absorption or scattering in a medium lying between the surfaces), and a comparison of the two equations results in:

Example: If you compare a nearby billboard with an identically illuminated one further away, both appear equally “ bright ” (they have a distance-independent and therefore identical luminance in both cases). The closer wall, however, takes up a larger solid angle for the observer, so that a larger luminous flux overall reaches the observer from this larger solid angle. The closer wall creates a greater illuminance for the observer ( photometric distance law ).

The SI unit of luminance is candela per square meter (cd / m²).

The specification of the luminance is used for the brightness of computer screens, which typically have 200 to 300 cd / m². Likewise, the brightness of LED video walls , as used in the event industry, is often specified in nits. Values ​​in the lower to middle four-digit range are common here. The nit is not a legal entity in Germany and Switzerland.

In addition, the unit Lambert is also used in the USA :

Conversion factors for other units of luminance include: a .:

Comparison of radiometric and photometric quantities